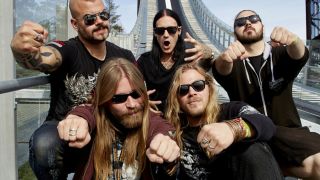 When Hammer arrive at Sweden’s National Ski Stadium in the small city of Falun – the site of Rockstad: Falun, aka Sabaton Open Air – the Swedish War Machine is in the swing of a signing session, with a vast queue of Sabaton-shirted diehards snaking around the festival entrance. “What’s all the fuss?” one local punter deadpans waggishly. “They’re just a little garage band from Falun!”

That’s certainly what Sabaton were 10-15 years ago, but the extraordinary trajectory this band have taken over the last decade has seen their self-run hometown festival become a tangible gauge of how far they’ve grown year-on-year, entirely through their own strenuous efforts, ambitions and talents. So, in 2014, there are more punters, more countries represented in the crowd (at least 27), more Sabaton-branded cars and minibuses, better PR (festival adverts adorn the train from Stockholm), and more friends and fans volunteering to staff the festival. Hammer are introduced to the father of frontman Joakim Brodén, who’s helping out around the site (“He’s cheap labour, basically!” laughs the singer) and getting much mileage out of his ‘I threw a guy off Sabaton’s tourbus and it turned out to be Dio’ anecdote. Sabaton bassist and mastermind Pär Sundström – who manages to combine easy-going charm with obsessional organisational efficiency – is relaxing with a beer in the VIP area, going through the festival running order delineating each band’s link to Sabaton.

“We can basically tell a story that connects Sabaton to almost every band in some way. It causes a very nice atmosphere,” he reflects. “Most of the people working here are Sabaton fans from around the world. Some fanclubs do it as an organised trip, they come with a whole crew, like, ‘Direct us, what should we do? We’ll help you build the Sabaton festival and make it as good as possible, then we want to see the Sabaton show in return!’” This personal touch is part of the extended family ethos of the event, as Joakim affirms: “We invite a lot of friends and other bands from this region, bands we’ve played with, bands we’ve met and like personally, local bands that we think deserve more attention.”

“THE FESTIVAL STARTED BECAUSE WE USED TO BE SHIT AND NO-ONE WOULD BOOK US!” JOAKIM BRODEN

One local band that already commands the world’s attention is power trio Grand Magus, whose set begins in heavy rain, but whose chest-beating true metal euphoria coaxes the sun and summons a rainbow over the ski slope facing the stage. After the set, drummer Ludwig Witt changes into a serendipitous Ritchie Blackmore’s Rainbow t-shirt while Sabaton have duties to attend: fanclub meetings, production meetings, hands-on festival coordination (Joakim, like his dad, is working as a driver to ferry around guests and volunteers). Thanks to the band, plus redoubtable festival manager Krister Lindholm and a loyal army of supporter-helpers, the running of Sabaton Open Air seems smooth, everything going to plan on time while the atmosphere remains friendly and unstressed. However, as dusk descends and Pär reappears in the VIP area for another beer, there appears to be a wrinkle: “Testament should’ve started signing six minutes ago,” he frowns. The Bay Area bruisers are headlining tonight, and there’s still no sign of them. But with an hour to spare before their set, Chuck Billy’s distinguished crew come marching coolly from bus to dressing room, drummer Gene Hoglan quickly commandeering a picnic table to do warm-up exercises with a fag in his mouth. The only band here with a 30+ year pedigree – and the festival’s only Americans – the belated arrival of Testament sends a tangible frisson around the musicians’ enclave, profoundly justified by the quintet’s blistering set. At nearly 1am, soon after the closing strains of The Formation Of Damnation, the band assemble for their rescheduled signing session as Rhapsody Of Fire unloose their symphonic bombast to the moonlit ski slope.

The next day, Hammer are granted privileged access to the band’s rehearsal/studio/hang-out space among conifers on the outskirts of Falun, which instantly illuminates and confirms Sabaton’s remarkable stature and ambition. A shelf bulges with career souvenirs: awards, gold discs, Sabaton-branded beers, model aircraft and sticks of rock, phials of sand from Omaha Beach, even a Polish officer’s sabre donated by the Archbishop of Gdansk in gratitude to Sabaton for the song 40:1, commemorating the 1939 Battle of Wizna when Polish troops held back Nazi invaders. Huge maps are scattered with pins, colour-coded according to the financial success of the band’s visit. Guitarist Thobbe and drummer Hannes are scoffing raspberry liquorice-flavoured sticks of rock and fat, cold sausages (“I’ve got a show tonight – I want to puke and shit myself onstage,” explains Hannes) while Joakim rustles up some coffee and remembers the earliest days of Sabaton’s own DIY festival. “It actually happened because we had to; back in those days in Falun no place would book us. We were shit, so I understand why!” the frontman chortles. “But in 2006 we held a small festival with some friends in a pub – we called it Rock City Falun, for fun – with only about 2-300 people there. It was sold out!”

“The guy who owned the pub where we had that first festival, he’s now running the bars!” adds Pär, reiterating the ties between the band and the Falun community of friends at Sabaton Open Air. This name was only chosen last year, to emphasise the special nature of the band’s headline performance; tonight, Sabaton are performing their landmark Carolus Rex album in its entirety, in Swedish. “The festival has always been the place for us to do something unique,” declares Pär. “It’s not our biggest show, but it’s always something the fans can’t get somewhere else. They can’t get Carolus Rex in Swedish anywhere else – and a lot of people don’t want it! But other people want it more than anything in the world.” Pär will start planning next year’s festival as soon as this one is over, but he is always planning ways to spread the scale of the band’s production across the world. “I know our UK fans are upset with our festival performances,” he admits, “because they’ve always been short, and when we come on headline tours it’s always been in small clubs where we couldn’t bring the full production. We have a lot of UK fans who are extremely hungry and we want to give them what we’re doing when we tour Sweden this summer. What we do here is what we should be doing everywhere, this is the show we want people to experience.”

On the way back to the festival, Pär takes us via the Great Pit of Falun Mine, which, he proudly announces, once provided one third of the world’s copper, securing the economic basis for the Swedish Empire. The spectacular location has special associations for the bassist, who used to stop here on his way home from school, to sit, listen to music and “work out what I wanted to do in life.” Sabaton even tried to secure it for their festival venue, but were scuppered by an endangered species. “There’s some owl who lives there,” Pär explains, “and people were like, ‘You can’t do a festival, the owl will be terrified!’ OK, we’re fucked – that owl is more important than thousands of heavy metal fans. Then somebody said, ‘What are you fighting for? The owl is deaf!’ He wouldn’t hear anything. And he’s colour blind, so he wouldn’t see the stage lights at all. He will just be happy because the area would be full of food!” We see how beautifully Falun’s ecosystem has recovered since it was the blackened, blighted landscape of the mine’s heyday with a quick drive to the top of the ski slope for a panoramic photoshoot, where vertigo-stricken guitarist Thobbe clings, trembling, to the side of a high scaffold. Even from this rarefied vantage point, the main stage sounds fantastic as veteran Swedish hard rockers Alien crank some 80s hits to the gathering throng.

Back at the festival site, Sabaton have more fan meetings and pyrotechnic drills to attend while bloodthirsty Germans Battle Beast rip through a textbook headbanging festival set, and darkness falls to the epic, rousing Faroese folk metal singalongs of Tyr. Afterwards, the backstage area gets hallucinogenic as a gaggle of Orcs (from the outrageous stage show of Falun-based power metal berserkers Twilight Force) share crisps with 17th-century Carolean soldiers, deployed to march onstage and fire muskets during the Carolus Rex set. Pär runs them through some last-minute military choreography as we take our places for Sabaton’s keenly anticipated set.

Artful patterns of flame shoot across the stage in perfect pulsing rhythms and musketeers hit their marks as the band throw everything into an impassioned, goosebump-inducing performance, where questions about who will be the festival headliners of the future are resoundingly resolved. On this stage, at their own festival in their hometown, Sabaton look, sound, perform and are received like they’re the biggest band in the world; casually jamming the Master Of Puppets riff, Joakim goads the crowd: “You like Metallica, huh? Maybe we’ll ask them to open the festival next year?” After an additional smattering of classics and instant barnstormers from latest opus Heroes, the set closes with a volley of fireworks over the ski slope, specially lit up for the occasion.

“We always smile onstage, we always have fun,” Pär told us before the show, “but every time we play here I take a moment to watch and think: all of these people travelled so far for this. And 350 people have been working to build it all up. You think about that, and it becomes much more emotional than any other show we do. This isn’t just a show. You see the people in the front row, you see people in the beer tent, you see the other bands, our friends, families, all the people who work in front of the stage, people standing at the gate, people guarding the cars. They all make this show stand out way beyond anything we ever do.”

Heroes is out now via Nuclear Blast. Sabaton tour the UK from November.