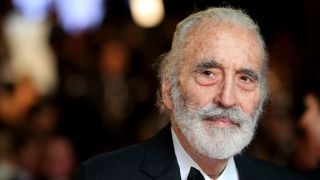 We recently reported that Aerosmith’s Joe Perry has recorded an EP with global megastar Johnny Depp which surprised fans of both parties everywhere. But it’s not the first time Hollywood actors have worked with rock icons…

There was a period when Orson Welles was the greatest actor and director of his generation, and his masterpiece Citizen Kane is still ranked by many as the finest film ever made. And then came a period… how best to put this… where he did any old shit. Which is why, when ‘80s power metallers Manowar asked him if he’d do some voiceover work on their debut album, he readily agreed. “And they placed in his hands a sword made for him called Vengeance, forged in brimstone and tempered by the woeful tears of the unavenged,” boomed the 1941 Oscar-winner on the debut album of a band regularly described as one of the most ridiculous of all time. So impressive was Welles’ work, that the band saved some of his offcuts and added them to Defender on their fifth album, Fighting The World, after Welles had died – thus providing him with ample opportunity to start spinning in his final resting place.

The horror legend and The Hobbit star has long collaborated on rock and metal albums, his most famous earliest work being on The Wicker Man soundtrack. Though he added his voice to a number of concept albums in the ‘70s and ‘80s, it was when he worked with the Italian power metal band Rhapsody in 2005 on their single The Magic Of The Wizard’s Dream that he became fully immersed in metal. His own solo metal album, 2010’s _Charlemagne: By The Sword And The Cross _earned him Metal Hammer’s Spirit Of Metal award at the Golden Gods, while more recently he worked with members of Judas Priest on his own 2012 album, and has released a series of EPs featuring metal Christmas songs and covers.

The British character actor Anthony Valentine cannot probably be called a star. Though he acted opposite the likes of Laurence Olivier, he has always been in a supporting role. A true professional, his long career is testament to his talent – though he has never much broken out of billings in perennial classics like Z-Cars, The Avengers, Bergerac, Lovejoy, The Bill, Dr Who and others. So he must have been somewhat perplexed when the American prog-metallers Queenrÿche asked him to guest on their seminal 1988 concept record Operation: Mindcrime. As Dr X on the record, he plays the role of a demagogue who manipulates and brainwashes heroin addicts over a soundtrack of high-concept metal. Which, for Valentine, must have made a nice change from playing bit parts in Minder.

The Hertfordshire prog-metallers couldn’t, in all honesty, claim to have had the most stellar of careers. A few decent reviews here and there, the odd thumbs up from the likes of Yes’s Rick Wakeman being the highs of a ho-hum career that has rumbled along since 2003. And then Jeremy Irons, the Academy-, Emmy- and Tony-Award-winning star of stage and screen, agreed to add some vocals to their 2009 second album Wintercoast. “Through oceans of time this damp cell has become my home,” booms one of Britain’s greatest actors at the start of an album by a bunch of talented but decidedly anonymous British musos. Odd.

And one the other way round. Rather than an actor making an unlikely guest appearance on a metal album, a metaller making an unlikely guest appearance in a motion picture. Amon Amarth have long been categorised as Viking metal – though “we never called ourselves that,” the band’s singer Johan Hegg once growled – but Hegg was happy to appear in 2014’s forthcoming Northmen – A Viking Saga, a casting that can’t have been too much of a stretch for the director given Hegg’s hulking, bearded Swedish death metaller frame and the fact he has long been obsessed with his Norse forefathers. “It started for me when I was pretty young – nine or ten years old – and I was reading about it in school,” said Hegg of his love of Vikings. “There’s a Danish comic book series called Valhalla that I used to read too. As I got older, I got into very deeply… it developed into an obsession.” Frankly, if actors can have a go at making metal songs, metallers may as well have a go at making films.