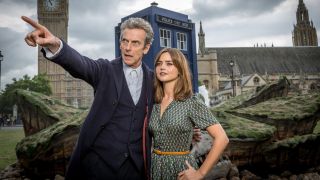 So Peter Capaldi began his term as The Doctor this Saturday and needless to say that got us a bit excited. So excited in fact that we decided to run down The Doctor's most metal exploits through time and space.

The First Doctor is spitting with fury when companion Barbara – mistaken by 15th century Mexican High Priests for the reincarnation of an Aztec god – tries to put a stop to human sacrifice, prompting a dishonoured ritual victim to commit perhaps the first suicide on children’s television. The Doctor also seduces a girl then gives her the elbow like he’s Phil Lynott or something.

Another doom-laden historical tragedy, The Massacre gets going with a punch-up in a tavern and features boozing, political agitation, witch hunts and the dead body of a hated religious leader lying in a gutter, while the TARDIS escapes just as the first screams of the massacre ring out. In addition, the episode titles could be Manowar songs: War Of God, The Sea Beggar, Priest Of Death and Bell Of Doom.

The Second Doctor uncovers a plan to assemble an ultimate army of soldiers from different periods of Earth history by herding them into War Zones – First World War, Boer War, Imperial Rome, American Civil War etc – ensuring this is the Doctor Who DVD most likely to be spotted on Sabaton’s tour bus. As if that wasn’t metal enough, the outlaw Doctor is then put on trial by his own people for breaking the laws of time.

An ancient burial mound unleashes cloven-hoofed beasts and possessed gargoyles, enabled by the Third Doctor’s dark nemesis, the Master, posing as Satanic vicar Reverend Magister (whose pseudonym inspired that of Magister Albert from Reverend Bizarre). The Master conducts a Black Mass, the church explodes, and the Brigadier declines a maypole dance with the explanation “I think I’d rather have a pint.”

Another 70s Doctor Who story, another Reverend Bizarre connection – the much-missed Finnish doom trio reworked Doctor Who’s theme tune as a galloping psychedelic jam named after this Hammer horror-indebted tale of murderous robot mummies in thrall to the sinister Egyptian god Sutekh the Destroyer, aka Satan. Hard not to imagine this story played out in the lyrics of Powerslave.

Rarely does family teatime telly present occult horror as dark as this. The Fourth Doctor gets caught up with an impossibly ancient human skull, a black magic coven that turns into slithering phallic monsters from space, and Wanda Ventham prostrate inside a giant pentagram. Another religious building is blown up; the Doctor Who production team must have been responsible for immolating almost as many houses of God as the Norwegian Black Metal Mafia.

Let’s face it, Daleks are the Nazis it’s okay to like, and few stories featuring the iconic metal meanies are as packed with guns, bombs and massacre as this gritty Fifth Doctor yarn starting with policemen gunning down several escapees and ending with companion Tegan fleeing in distress from a TARDIS surrounded by corpses, sick of all the slaughter. Much action takes place at Shad Thames in London, which in 1984 was also the location of a Venom photo shoot.

An alarmingly bleak and sadistic tale of industrial corruption on the prison planet Varos where a desensitised public watch and vote on interactive televised torture and execution. Even the Sixth Doctor is not immune from the casual brutality, nudging two men into an acid bath with a jolly quip. All this plus horrific scientific experiments, cannibals, attempted hangings and a magnificently vile cackling slug.

A secret naval base during World War II, lethal nerve gas, gunfights, apocalyptic runes telling of an evil curse from the dawn of time, mutant vampire zombies from the toxic sludge of Earth’s post-apocalyptic future animating the corpses of sunken Vikings; surely Doctor Who’s most metal story, even before you notice that Fenric is a take on Fenrir, the monstrous wolf from Norse mythology who also inspired the name of Darkthrone drummer Fenriz.

Most Doctor Who stories since the show’s return in 2004 have been a bit too touchy-feely and hamstrung by compliance issues to properly evoke the lurid extremity of metal, but in the excitingly-titled second episode the Eleventh Doctor effectively meets the devil, or perhaps – as the giant fiery horned skeletal epitome of evil is referred to only as The Beast – a close relation of Iron Maiden’s Eddie.