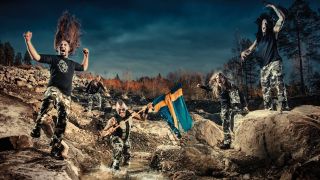 HOW MUCH OF YOUR SUCCESS DO YOU THINK IS DUE TO YOUR TOURING HABITS?

Joakim Brodén (vocals): “I would say probably 70% of it. Obviously, if the songs were shit, people wouldn’t like it, but if you’re not playing, you don’t exist, basically. Who today goes to a record store and buys an album because it has a cool cover? The only way for people to discover you is to play live shows. I don’t understand bands who would go on stage and not give everything, because that’s your biggest commercial advertisement poster.” /o:p

WHAT ELSE DO YOU THINK HAS PUSHED YOU UP THE METAL LADDER?

“Our misfortunes back in the day turned out to be our lucky stars. If we hadn’t been fucked over by our old record labels, people might have seen us back in 2001 to 2004, and we were shit! By the time we came to, say, 2006, that’s where you can see, in the live show, what Sabaton is. That’s when I’m not so ashamed of looking at what we did. So it was a lucky break, that we were held back. By the time we started getting exposed to people, actually doing proper shows, at least we were decent enough to not get hated by the crowd.”

DO YOU THINK ANOTHER BAND IN YOUR SPHERE OF METAL CAN REALISTICALLY GET TO WHERE YOU HAVE?

“I wouldn’t say it’s impossible! For fuck’s sake, if we can make it, with all the mistakes we’ve made… If somebody comes and does it right, they’ll run past us in a fucking heartbeat! There’s no manual to heavy metal.”

“Around 70% never get to the next level. It is a tough thing to take a heavy metal band – which you start, in 90% of the cases, because you play the music that you want to play, and it’s a party – to that level when you have to scale away some of the fun and level up to a professional level. That’s where some people aren’t interested any more. The dream of going on tour, of being away for 200 days every year – it sounds like fun and games, but no reality is like the dream. Some people don’t like it, some people love it – I happen to fall into the second category!”/o:p

POWER TO THE PEOPLE

Power metal has never been bigger, and here’s the proof…

The Orc-loving Germans have reigned loudly and proudly as the world’s biggest power metal band for three bombastic decades now – and judging by their imminent appearance at the hardly intimate London Forum in April, the UK is finally catching up. Swords at the ready…

Another veteran act who finally seem to be getting bigger and bigger on these shores too, Hammerfall are, quite possibly, the most unashamedly cheesy power metal band in the history of the known universe. And we bloody love them for it.

Yes, we know they’re a bunch of pirates, but Alestorm are undoubtedly one of power metal’s most successful offspring from the last decade or so. From filling UK arenas with their own festival to selling out venues across the US, this is a revolution that will be piratised. Don’t say we didn’t warn you./o:p