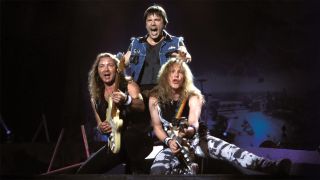 As the sun dawned on Rio de Janeiro on April 1 1964, a bloody new chapter of history had begun in Brazil. Overnight, plots had unfolded that saw a US-supported military coup d’état overthrow the administration of President João Goulart, and the ensuing years promised to be a dystopian nightmare with riots, state-sanctioned torture, censorship and suppression of free speech rife.

While 1960s youths had found solace in using the popular genre of samba to create protest songs to rail against the establishment, by the late 70s it had been co-opted by the authorities and robbed of its potency. With the dictatorship’s power waning and the youth disillusioned as the 80s dawned, something new was needed…

“It all started when Queen played  Sao Paulo in ’81,” explains Nando Machado, manager of Brazilian metal legends Viper. “They played Estádio  do Morumbi to over 100,000 people, followed by both Kiss and Van Halen tours in 1983 that were broadcast on TV. It grew with the feelings of the youth who didn’t want to grow up with the military dictatorship; we wanted freedom of choice.”

“By 1980, things were already a little more loose and bands had started to come down to Brazil,” says Sepultura guitarist Andreas Kisser.

“It was also [around] the time that Sepultura first started, so it was a very exciting time for people my age. Around ’83, I got friends in school together to form a covers band. We played a science fair just so we could get up and talk about heavy metal – a real reason for the kids to not abandon school!”

Still largely consigned to the fringes and underground, something seismic was needed to push this nascent rock fandom from garages and school  shows into the popular consciousness.

By late ’84, that something had arrived: Rock In Rio advertised its inaugural event for the following January on  one of Brazil’s biggest TV shows, dropping some of the biggest names in rock and metal including Ozzy Osbourne, AC/DC, Scorpions and Iron Maiden. “I was so excited – these were the bands I listened to at the time!” enthuses Andreas.

Hosted in the same city where the coup d’état had established a new regime some 21 years before, the festival was set within the newly built City Of Rock, utilising the stage production of first night headliners Queen.

The event would go on to be an apotheosis for all the bands involved, pulling in around 350,000 – 500,000 people each day and being broadcast throughout Brazil and around the world.

“We knew it wasn’t going to be your usual festival,” admits Scorpions vocalist Klaus Meine. “To play in front of 350,000+ Latin American fans going nuts was fantastic. It turned out to be a milestone for our career.”

The band didn’t disappoint, either. “We came out of this huge drum-riser and just went straight into it; it was all about energy, power and giving it 200%. Rudolf [Schenker, Scorpions guitarist] cut his eyebrow during one of the sets and he was just lying there, howling on his guitar with blood pouring down his face – it was a very dramatic moment!”

Scorpions weren’t the only band on the bill making their mark – Iron Maiden also made their Brazil debut  at the festival, and though their first performance wasn’t without setbacks (YouTube videos show the usually unflappable Bruce Dickinson roaring  in frustration at sound techs), it set the stage for a triumphant return in 2001 that’d be captured for the Rock In Rio live album.

For Andreas, the combination of acts proved to be all the confirmation he needed for what his future held. “I went to see Ozzy, who was my idol at the time and on the Bark At The Moon tour, and it came with the bonus of Scorpions at the height of their career on Love At First Sting. It was one of the best experiences of my life, and it made me certain I wanted to be a musician.”

It’d take six years for Rock in Rio to return as a festival, but it mattered little; the first event was enough to ensure that heavy music was now in the forefront of Brazilians’ minds. “After that, everyone was either trying to be in a band, or putting shows on by renting out theatres and whatever,” says Nando.

“It was huge for those who attended, but as it was nationally broadcast it had a wider impact on the whole country. It became fashionable to be into heavy music and [TV network] Globo even created a term, ‘metalados’, to describe the long-haired kids with black t-shirts and bullet belts. We hated it because we didn’t want to be seen as people who followed fashion.”

As if taking AC/DC’s Let There Be Rock lyrics to heart all across Brazil, it seemed every band was blowing up a storm – over in Sao Paulo, it was more fuel to the fire as both Sepultura and Viper  got underway, a youthful revolution in the very literal sense of the phrase. “Bands would start and play Judas Priest and Black Sabbath songs,” says Nando.

“But Viper played their first ‘professional’ show at a theatre when André [Matos, former vocalist] was just 13 years old and came out covering Saxon, Venom and Demon songs, as well as five of his own. The crowds were all 18- or 19-year-olds, just watching these young kids play – very unusual!”

Taking lessons from the biggest names in the business, Brazil’s music scene exploded with bands. But, much as its first event had seemed to be a crystallisation of the demise of the military dictatorship, Rock In Rio II was now setting the stage for yet another major upheaval – this time for the metal scene itself.

It was 1991 and Faith No More were flying high; they conducted an interview with MTV in Rio after Epic had become a smash hit and completely transformed the lukewarm response to their latest release, The Real Thing, turning them into unlikely stars.

“Going to South America at that point seemed like a pipe dream,” says bassist Billy Gould. “We didn’t have any kind of idea of the scale of it back then.”

“We played Rock In Rio not long after we did the Voivod/Soundgarden tour,” adds drummer Mike Bordin. “We were just destroying small, sweaty venues at that point, playing with our friends.”

Even so, Faith No More were greeted like the biggest band on the planet when they hit Rio, swarmed by screaming fans to such an extent that they had to hire security to get them around the city.

“We knew things were changing, but when you get to Rio and there are hordes of fans screaming and chasing after you… it’s super-overwhelming and strange,” admits Mike. “It was  a different world,” Billy sagely agrees. “Brazilians are the friendliest people on earth, so straight away we felt at home. It was a hell of an adventure.”

Faith No More had already enjoyed  a taste of bigger crowds by playing shows alongside Metallica, but Rock In Rio was yet another launchpad on their way to becoming arena-conquering behemoths.

“It was really something, seeing those audiences at the biggest stadium in the world,” Mike grins. “It was fucking magical and explosive, totally insane! We weren’t going to shrink away from that; you give us half a chance and I’ll have my feet on your chest, hands around your throat.”

If Faith No More represented the charge of alternative influence on metal, then local heroes Sepultura were a taste of metal to come. “We were recording Arise towards the end  of 1990 and got a call to say we were confirmed for Rock In Rio,” Andreas says, incredulously.

“Rock In Rio was something else; we were playing at home to friends and family, with a TV station broadcasting it to the world. It was the first time the world truly paid attention to us. We’d opened some doors with Beneath The Remains and been in some magazines, so we were building  a name outside of Brazil, but at home we still weren’t worth paying attention to.”

Opening the metal day at Maracanã Stadium, Sepultura set out to slay their hometown audience and brought the house down. They proved that even up against metal’s biggest and most prestigious names, they wouldn’t be beat.

“We were proud to be the first real Brazilian metal band to play such a festival; in 1985 they invited Brazilian bands to play, but so many were rock or pop, no real metal representatives.”

“We got to watch Sepultura grow from a black/death metal band to become some of the biggest icons in the metal world,” says Nando. “When they played at Rock In Rio it was huge. They’d just done a free show in São Paulo that attracted thousands, and after Rock In Rio they started getting on the radio even though they were so heavy.”

If Rock In Rio had been an apotheosis, Rock In Rio II was a changing of the guard: the shifting of tides from the metal gods of old to the lunatic kings of the new age. And the infrequent nature of Rock In Rio has lent credence to its status as a festival like no other.

Be it Maiden making a storming return in 2001 or Def Leppard finally making it there in 2017 (having cancelled their appearance at the original), there’s something undeniable about its appeal to rock’s biggest names. 2019’s festival looks set to uphold its grand traditions, featuring the likes of Maiden, Slayer, Scorpions and, of course, Sepultura.

“Every Rock In Rio event is special,” admits Andreas. “We always set out to do something new. 2019’s metal day looks to be historical: Slayer, Scorpions, Iron Maiden and Sepultura, plus two Brazilian bands jamming with Chuck Billy from Testament.

"Plus, the Sunset Stage will be opened by Nervosa. Rock In Rio opens up possibilities for so many bands. It’s a truly Brazilian festival; it represents our country’s diversity. It feels like the best and most important festival in the world and it’s such  a privilege to be part of such an event.”

“For heavy metal, it’s paradise, and to come back is emotional,” agrees Klaus. “Rock In Rio laid down the foundation for a lot of things for Scorpions. We were very happy to be part of such an iconic event. Ultimately, the thing that makes it different is the fans; they love rock and metal. Brazilians always welcome you with open arms and it makes you want to put on the best show on earth.”