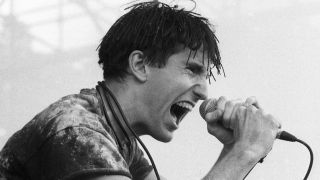 I’m kind of young I guess, so I wasn’t on board with Nine Inch Nails from the start. When Pretty Hate Machine came out, I was like, three. So I didn’t get it right off the bat, but in the mid-90s I don’t think anyone that listened to music could’ve not known who Nine Inch Nails were – all the kids at school had the shirts on.

It wasn’t that I caught Closer on MTV and then went and bought The Downward Spiral or anything like that. It was almost like that book The Celestine Prophecy, where all of a sudden this dude Trent Reznor was popping up everywhere I turned, and in many different guises.

I was about 10 years old and one day, I watched Lost Highway, and that was my gateway into Trent Reznor’s world. The Perfect Drug was used in the film, and this was back in the day when we used to have to read the back of the VHS tapes to find out who the fuck was doing what. I saw Trent Reznor’s name on the back, but there was a picture of Bill Pullman driving a car on the front. I thought that was Trent – I was only 10, don’t forget. So I thought he did all the music for the movie and that he was also on the cover. Then you had the Closer video, which was the coolest video on TV, and The Downward Spiral was out. That’s when I saw all the kids in school wearing the shirts.

My brother was a big video gamer too, and he had the game Quake, which had Nine Inch Nails logos in the video game. So of course, just like with Lost Highway, I thought he made the game as well. Around this time I also saw Natural Born Killers. It became another one of my favourite movies and Trent also did the soundtrack for that. If I didn’t know any better, I probably would’ve thought he directed the fucking thing as well. I just thought this dude did everything that you can think of – and he kind of does.

I’d never discovered anyone like Trent Reznor. Before him, it was strictly gangster rap for me. And Tupac is still my guy. But when Trent came along he seemed to be spread across all these different facilities and that was a big deal to me because it was more than just music. All the musicians that I knew just existed in their music compartment. But this dude, to my ignorant young self, was creating video games and soundtracks and movies. I was in fantasyland. It was like a dream state.

By the time The Fragile came out in 1999, everything else just seemed insignificant to me. It was a shell compared to what Trent was doing. He just felt much more complete, and that was really important to me. He’s still very important to me. I’m not really a big fan of people who say that they’re musicians and think that facility is enough to encapsulate their whole being. I’d rather follow people that are well-rounded artists. If you’re that kind of artist, you can basically facilitate yourself any way you want. That’s what we try to do in King 810.

All I can do as an artist is try to hold a candle to him. So when it comes time to shoot videos, I write and direct them. It’s the same with the music and any writing that we do; we have ultimate control over everything that we’ve ever done. He’s also impacted me in the sense that he’s made me not want to stay in one lane, and not be satisfied with just one guise. I have a bunch of crazy ideas and goals because of him, and he taught me that more is possible.

King 810’s forthcoming album La Petite Mort Or A Conversation With God is set for release on September 16 via Roadrunner Records and is now available for pre-order.