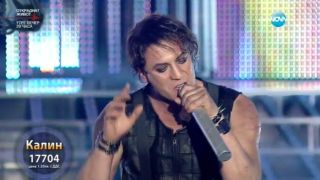 Kalin Vrachanski as Till Lindemann

UK talent shows’ golden years are but a brown speck upon the toilet seat of entertainment but mainland Europe’s got it covered. So much so that Rammstein are a popular choice for talent show hopefuls and, in celebration of that fact, here’s six examples…

Misha Sulukhia kicks off this list in the most freakish of fashions, paying homage to Till Lindemman’s lacerated, vulnerable figure in the acoustic video for Mein Herz brennt ­– with some Dawn Of The Dead contact lenses to boot. A saucy bit of falsetto dribbles through the pre-chorus then BANG! and we’re back to electric; Misha’s headbanging, he can’t scream for peanuts but the judges bloody love it. Wouldn’t catch Steve Brookstein doing this, eh?

Upon the stage, this guy looks like a naughty school kid who’s been asked by the teacher: “If it’s so funny, why don’t you share it with the rest of the class?” And share he does – the gift of Haifisch is bestowed upon all in attendance, their enthusiastic clapping grinding to a halt when they realise that they don’t like it at all. The bloke lacks the smoothness of Lindemann’s bass and the verse/chorus transition is a bit of an car crash, but he gives it a bloody good go. Bless him.

Mutter (The Voice of Ukraine)

His name is Vadim Voytovich and he sings Mutter… we think. Clad in a Rammstein shirt and a throat seemingly filled with cement, Vadim tears through this fragile Rammstein classic with the subtlety of a an angry bull in a china shop end of season sale. He can’t really sing, he can’t really pronounce any German words but by heck, when Vadim gets on his knees… that’s the sort of image that should be decorating teenage girls’ bedroom walls for decades to come.

Ooh look, they’ve let a member of Iced Earth on stage. Wait, no, it’s a Romanian chap called Dan Raţiu and he’s ready to rock, Kreator shirt crisply-ironed and vertebrae poised to violently snap. His pronunciation is pants, his timing is way off but he’s committed to that headbanging job, dammit. Judge Delia Matache even wanders onstage and joins in. Rammstein: bringing people together.

Another round of Du Hast, this time performed with the enthusiasm of a limp twig headed for the wood chipper on a Friday night. Mamuka Kavelashvili is the offender; the epitome of the guy down the office who enjoys to ‘rawk out’, enjoying it even more when he spells it exactly like that. It’s all very lacklustre – but at least he’s smiling… right? Right?

Actor Kalin Vrachanski is dolled-up like Till, his mannerisms also proving exceedingly Lindemannesque – he even does the ‘Till Hammer’, although it’s more like a ‘Till Slap’. Doesn’t sound as powerful, right? Anyway, the point of this show is to impersonate musicians; this is an admirable rendition, Kalin revelling in the flames as he struggles through the “This is not a love song” mid-section. Proof that even when you look the part, no matter how big your budget, you can never imitate the sheer power of Till Lindemann, physically or vocally. Especially on the telly.