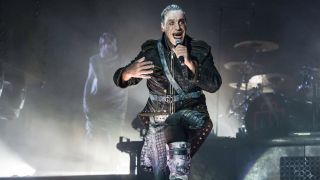 The reasons for their repeated visits to the Donington festival are numerous: the retina-frying light show, the sight of Till Lindemann wrapping himself in explosive charges and the Neue Deutsche Härte stomp of their thigh-pounding setlist. Plus, everyone loves loud fucking explosions.

But one important question was raised during their set – when do people actually listen to Rammstein? We can’t imagine anyone settling in to their favourite chair, pouring a glass of wine and smiling with anticipation as the needle drops onto the first side of Herzeleid.

You need to enjoy their music in outrageous settings and unlikely scenarios. Their body of work demands it.

Here are nine situations where only Rammstein’s music will do…

The A-Z of Rammstein

Rammstein: "They Drank And Flagellated Themselves, The Blood's Real."