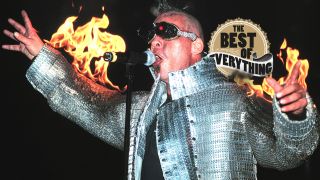 Simulated sodomy. Fire-breathing guitarists. Songs about sadomasochism, sex tourism and a man being fed his own bits. You’d have thought this stuff was exclusive to people who dwell in basements and season their dinner with tears, but Rammstein’s long-awaited and subsequently classic slot at 2013’s Download Festival proved otherwise.

Despite being occasionally reviled in their native Germany, the industrial six-piece were destined for a sordid sort of stardom from the get-go. Two cuts from their 1995 debut, Herzeleid, haymakered their way into Lost Highway’s soundtrack, but that was mere foreplay. The appetiser. The calm before the mucky storm.

Sehnsucht hit in 1997 and Mutter perfected industrial bludgery circa 2001; throughout this period, Rammstein’s legend was scribbled down. They obliterated the likes of Korn and KMFDM on tour, they perverted further motion picture soundtracks and, most importantly, they released a slew of singles that remain rock classics to this day. There’s so much more to this music than just White Zombie riffs and lots of rolled ‘r’ noises. You already know the singles, so join us and peep at the lesser-known nooks and crannies of Rammstein’s ascension.

SPIEL MIT MIR (Sehnsucht, 1997) Nothing says ‘platinum album’ quite like a song about incest, eh? Spiel Mit Mir harbours Rammstein’s most sickening set of lyrics penned until 2009’s Wiener Blut; twisted euphemisms wrap around a blackened synth-track and a grinding, mid-tempo stomp. Heinously heavy and messed-up in that way only Rammstein can get away with – playful keyboard peppers the verses before going full-out Treehouse Of Horror at one point – Spiel Mit Mir is a harrowing affair warped even further by Till Lindemann’s sweet-as-treacle opening salvo. Makes Mein Teil sound like a credible Eurovision entry.

EIFERSUCHT (Sehnsucht, 1997) Of course, Rammstein don’t focus solely on literally grotesque subjects – Eifersucht deals with the green-eyed monster itself, adding dashes of abstract filth to the lyrical palette. Again, it’s songs like this that show off the band’s juxtaposing bits and pieces; an intro reminiscent of old PS1 games, a militaristic war-beat and Lindemann’s stuttered delivery of the refrain lead this tale of envious woe. “Jealousy is cooking.”

DAS MODELL (Das Modell single, 1997)
Of course they do a Kraftwerk cover. Paying homage to their countrymen’s The Model while simultaneously updating the song, Das Modell blends the band’s taut, staccato guitar crunch and Christoph Schneider’s four-to-the-floor fuckery with Flake’s cutesy, hyper-rave rendition of the keyboard melody – oh, and there’s some guitar slides thrown in for good measure. As a cover, it’s a tad predictable but imperiously executed nonetheless.

Listen to this song on Spotify

ADIOS (Mutter, 2001) If that bit at 2:08 doesn’t make you want to scream and clothesline a herd of llamas, then you’re dead inside.

KOKAIN (Das Modell single, 1997) For Lemmy’s sake, how did this not make it onto Sehnsucht?! The B-side to Das Modell, Kokain has a nigh-on EDM vibe about it, before obviously hauling the tune into Rammstein territory via Richard Kruspe and Paul Landers’ metronomic guitar chuggery. Lindemann’s never had the most versatile range, yet his vocal tic prior to the three minute mark serves as one of the greatest little nuances he’s ever smashed into a recording device.

ZWITTER (Mutter, 2001) Departing from the band’s usual bass-laden choruses, Zwitter’s main sing-along glistens against the ear-holes in a high-pitched major key. Lyrically, it’s very much a debatable affair; one could assume it’s about its literal translation (a hermaphrodite) or, digging deeper, it could be a poke at the etymology of the word itself, dissolving into a pool of narcissism and a ‘best of both worlds’ mindset. Either way, it’s a brilliant concept and the song’s an absolute rager.

STRIPPED (Sehnsucht special edition, 1998) Depeche Mode and pinched harmonics. Shouldn’t really work, should it? Nobody told this to Rammstein and we’re rather chuffed they didn’t. Stripped marked Lindemann’s first foray into English – shortening the song’s refrain as he found it to be a bit of a mouthful, bless him – and also courted a bit of controversy thanks to the video, which contains snippets of the Nazi propaganda film Olympia. Of course, its intended use here was always to highlight athletic endeavour – not the Nazi cause. Oh well. [NSFW]

HALLELUJA (Links 2-3-4 single, 2001) Cut from the same cloth as the Mutter tracks, Halleluja begins almost as a descendent of Rein Raus before hitting you with that chorus – a harrowing, child-like warble etches the name of the song and you’re going to want to sleep with a teddy bear for a while after. An overblown organ part rears its head and, coupled with thematic tones of corruption within the Catholic Church, it’s no wonder it was thrust onto the Resident Evil soundtrack.

REIN RAUS (Mutter, 2001) Yes, this one’s not about horses. A hard-hitting number that could have easily pinched its riffs from Ministry’s Psalm 69, the title’s literal translation is ‘In Out’. Musically, this is one of the simplest tracks from Mutter, but that’s in no way a bad thing; if anything, it’s a potent reminder of Rammstein’s unyielding quality, even when cracking off a so-called ‘safe’ track. In the words of the late, great and usually irate Steven Wells: “It’s all like shouting – “URK! ARK! UMLAUT RAUS!” – and killer riffs and fucking blowing shit the fuck up.” And who can argue with that?

5⁄4 (Mutter single, 2002) We’ll leave you with this ghastly so-and-so to tie things up. An instrumental jaunt that begins like one of those latter-day, Mythmaker-era Skinny Puppy songs that serves no other purpose than to terrify you, 5⁄4 soon descends into a cacophony of monotony, accompanied by some suitably creepy Speak & Spell dialogue. Something of a departure for Rammstein and all the better for it.