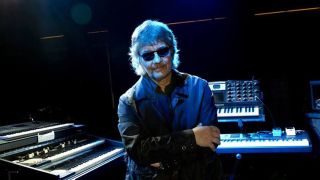 A gap of two decades separated your first and second solo albums, 1988’s K2 and Light In The Sky in 2008. Has All Out emerged so quickly because you’ve a settled group line-up?

Pretty much. It’s really a continuation of the last one, but with more of a band feel.

The album has some nice, dramatic proggy touches on Estancia and Right Arm Overture.

I’d like to think so, and that’s probably because I used to listen a lot to bands such as Gentle Giant and Emerson Lake & Palmer.

You wanted to remind people that a Hammond organ can be as much a lead instrument as a guitar.

Yeah. Plenty of time was spent getting the instrument to sound right, considering the album was made in just 20 days – spread over two and a half years.

How did Joe Bonamassa become involved?

I’ve been a fan of Joe’s for a long time. Purple had a night off in Rome, so we went to see him play. Over a drink I mentioned that I had a track that might suit him. I sent it to him and back it came with some amazing playing.

Many Prog readers will recall that you were a member of Colosseum II. Do you have good memories of those times?

Yes, they were amazing days. I’m in Dusseldorf at the moment, and Colosseum II used to play in this area a lot. One of our early German tours lasted for six weeks, I think, which was quite hard work.

You’ve been a full-time member of Deep Purple since Jon Lord’s retirement in 2002. How long did it take to feel comfortable and established?

I don’t think you ever feel like that in Purple.

[Laughing]: Yeah. Purple are just not that kind of band.

Nevertheless, you have made your influence felt on albums such as Bananas and Rapture Of The Deep.

Yes. I think I’ve made a decent contribution. I’ve tried to recreate the old sound that Jon used to have. I use different Hammonds and Leslies to Jon’s, but it really makes for a ferocious barrage. Paicey [Ian Paice, drums] and I had this discussion about the set-up on the Made In Japan sleeve and getting back on the ground, so we got rid of our risers and suddenly the full sound of the band has returned.

In 1987, you played live keyboards with Jethro Tull on European and US jaunts for the Crest Of A Knave album. Not as a full band member, but as a guest?

Yeah, I was with them for a year. It was an arrangement that happened to fit in with my plans to do a solo album for which MCA had offered me a contract. Musically, Tull weren’t quite my thing – I like heavier music – but the time I spent with them was marvellous. I bumped into Ian [Anderson] at Heathrow recently and we had a good old chat about our grandchildren [chuckles].

Funnily enough, Roger [Glover, bassist] and I were talking about what an incredible time it was making Down To Earth [by Rainbow, 1979] in a French château in winter. There was no material except Since You’ve Been Gone, which Ritchie [Blackmore, guitar] and Cozy [Powell, drums] didn’t want to do. At other points we didn’t even have a singer or a bass player, but it’s a fantastic piece of work.

Are there any that you now regret?

No, though I did work with a Canadian band called Helix who were very defensive about having keyboards on their album [Wild In The Streets, 1987]. Everything I played, they had to have a band meeting about. Then they’d listen back to what had been recorded and suddenly they wanted wall-to-wall keyboards over the whole thing. That was quite silly.

You’re writing a book about your career?

I started it a few years ago and then stopped because there were some things that felt too private. But it was such a shock when Gary [Moore] died, I felt it might be good to let people know the full story. I’ve a few shafts of illumination about quite a lot of people.

[Stories And Works of Don Airey was published in December 2018 by Shinko Music Mook. His fifth solo album, One Of A Kind, was released in the same year.]

This article was published in Prog #20