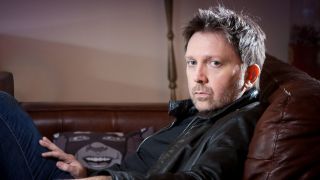 Paul Draper, former leader of prog-indie band Mansun, sometime collaborator of Steven Wilson and producer of 2016 Prog Limelight award winner The Anchoress’ album Confessions Of A Romance Novelist, is going on tour for the first time as a solo artist in September - tickets are now on sale and moving fast. This is hardly surprising considering his continued popularity since re-emerging following a near-decade-and-a-half layoff.

Tickets go on sale this Friday March 3 at 9am.

“My second solo EP [EP Two] outsold The Rolling Stones in the vinyl charts,” he tells Prog, “so we thought, ‘We’re on a roll here - let’s get the tour on sale.’ There has been a massive response. They’ve only been on sale for 24 hours but my guess is that people will be lucky to get tickets.”

Draper reveals that his set will comprise mainly new material although there will be a few Mansun classics thrown in to appease diehards.

“I’ve seen some artists play their latest songs and throw in a few from history,” he says, “and that doesn’t stop them from being current or relevant. But I don’t want to be part of nostalgia. I want to get on with my new material.”

Joining Draper in his band will be Catherine Anne Davies aka The Anchoress and Anthony Gorry (who played on Mansun’s final album, 2000’s Little Kix) on keyboards, Jon Barnett and Beau (both formerly of the band The Upper Room) on drums and bass respectively, with Ben Sink - his studio engineer - on lead guitar. They have all been playing with Draper for years, on his solo work as well as his collaboration with Steven Wilson, No Ideas (from EP One). Might Wilson - who has been working with Draper on various other projects - be making a cameo on the tour?

“Who knows? If he decides he wants to jump up onstage one night and do one of our collaborations, I’d be happy,” teases Draper. “I wouldn’t discount anything.”

Asked what direction his imminent debut album, Spooky Action, is going in, he replies that it will, if anything, be gadget-tastic.

“All my music is based on whatever gear I buy at the time,” he notes. “There has been a massive resurgence of synth-makers building analogue synths and I’ve bought them all - I’ve got a Moog, a mini-Moog, a Prophet 6, an Oberheim OB6 which is my favourite ever keyboard, I’ve got really old things like a Vox Continental 2, a Korg MF20, an Arp… I never thought this album would have an electronic feel, but the first and third Mansun albums did so obviously I naturally gravitate towards it. It’s not as though it’s suddenly become a project involving 808 drum machines - it’s me, only embellished. Instead of layering over guitars, I’m layering over synths.”

Which begs the question… how prog will Spooky Action be?

“It’s going to be somewhere between [Mansun’s 1997 debut] The Attack Of The Grey Lantern and [1999’s progfest] Six. As you know, I love my segues… There are going to be some long-winded bits and a little bit of self indulgence. It will have at least a foot in the alternative rock or prog world.”

As well as working on that “top secret” project with Wilson, Draper has been involved in the early stages, as Executive Producer, of the next Anchoress album.

Is Draper the proggiest musician ever to emerge from the so-called indie scene? Certainly he’s the most prog man to have been around during the Britpop era - perhaps that’s why Mansun earned the soubriquet “Brit-prog”. As for Draper, he has a nickname all his own.

“In the studio they call me the prog rock Noel Gallagher,” he says. “The other day we were doing something in the studio and the musicians decided it sounded like the synth Beatles. I’m the missing link between Steven Wilson and Oasis.”