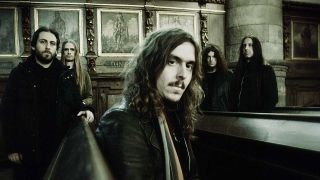 Emerging from the brutally exuberant Stockholm death metal scene of the early 90s, Opeth stood apart from the start. While their peers were inspired by Morbid Angel and Death, singer/guitarist Mikael Åkerfeldt’s crew had clearly been listening to old prog records from the 70s.

Their naïve but fervently exploratory debut album, Orchid, released in 1995, was a revelation for open-minded death metal fans, but even the band’s most devoted admirers won’t have anticipated the extraordinary musical journey that Opeth have taken over the past 25 years.

The band having rarely toured prior to its release, the album ensured that Opeth would steadily evolve into an impressive live act. As a result, their popularity has continued to grow, through numerous line-up changes and stylistic about-turns, and their contribution to progressive rock’s ongoing resurgence and rehabilitation is undeniable.

At this stage, Opeth’s appeal lies as much in their versatility as in their adherence to a particular sound. From the acoustic elegance of 2004’s Damnation and the multi-faceted, Beatles-saluting sprawl of 2005’s Ghost Reveries, to the dark, dissonant churn of 2008’s Watershed, the Swedes refused to repeat themselves.

Meanwhile, Åkerfeldt himself has earned a reputation as one of the best reluctant stand-up comedians in heavy music. He was also the first person to perform death metal vocals and say “c**t” on stage at the Royal Albert Hall.

No longer tethered to a metal scene that was never quite prepared to embrace Opeth’s weirder indulgences, they are proof that music can be adventurous and successful.

Blackwater Park was not just a self-evident career peak from a young band with the wind in their sails for the first time, it also had a profound impact on the entire world of heavy music, as lengthy, elaborate epics like The Leper Affinity and The Drapery Falls reintroduced progressive ideals and creative bravery to the metal world, while acoustic reveries like Harvest showcased a desire to move beyond it.

Full of gorgeous melodies but still thunderously heavy, Opeth’s breakthrough album is widely and rightly revered as both a classic and a progressive metal benchmark.View Deal

Partly inspired by a newfound love of Scott Walker’s avant-garde nightmare The Drift, Opeth’s ninth album is dark and dissonant.

More importantly, it was their most thrillingly unhinged record to date, with songs like the wildly experimental The Lotus Eater and the psychedelic plug-spiral of Porcelain Hearts presenting a formidable challenge to more conservative listeners.

Despite being their last album to feature growled vocals, Watershed has plenty of moments of beauty, too: opener Coil is a blissful acoustic overture, while the languorous, melancholic Burden could well be the finest song Åkerfeldt has ever written.View Deal

The first Opeth album from the band’s current (and arguably best) line-up was an exercise in harnessing freshness and vitality.

Although less overtly experimental than the preceding Heritage, it’s full of unexpected detours, including blissful folkrock harmonising on the gorgeous River, angular, Goblin-style instrumental prog on the shuffling Goblin, and austere but haunted chamber music on closing ballad Faith In Others.

Elsewhere, As Above, So Below is a gloriously opulent epic, while preview single Cusp Of Eternity summed up Opeth’s appeal in five furious minutes, and became an instant live favourite.View Deal

Recorded simultaneously with the previous year’s Deliverance album, Damnation was the elegiac, acoustic flip-side to its sibling’s brooding, metallic thunderings.

A bold step at this early stage in Opeth’s rise to glory, its delicate and pointedly melodic songs showcased the band’s desire to keep evolving, regardless of the demands of an increasingly rabid fan base.

In the end, most Opeth fans fell instantly in love with Damnation, not least because the likes of In My Time Of Dying and Hope Leaves are both absurdly beautiful and subtly adventurous. From this moment on, Opeth were free to follow their own path.View Deal

But while dominated by labyrinthine, multi-part epics like Ghost Of Perdition and Harlequin Forest, it also boasted a sublime, thinly veiled Beatles tribute (Atonement), fragile ballads (Hours Of Wealth, Isolation Years) and a ferociously heavy paean to Satan himself (The Grand Conjuration).

It might have been the end of an era, but Ghost Reveries was still focused on the future.View Deal

Often overlooked due to following the much-loved Blackwater Park and preceding the acoustic curve ball Damnation, Deliverance is a much stronger and more substantial record than legend has it. For a start, the album’s monstrous, 13-minute title track is still the closest thing Opeth have to a hit, and it remains a live staple.

But the rest of the album is equally dazzling. For best results, check out the 2015 remixed version: from the windswept fury of Wreath to the intricate melodic churn of the closing By The Pain I See In Others, Deliverance is Opeth’s heaviest record and also one of their most cohesive.View Deal

After three albums which quietly established Opeth as major players in the metal underground, Still Life felt like a major statement of renewed intent.

Impossibly ornate and immaculately produced, it marked a huge leap forward for Mikael Åkerfeldt’s songwriting skills and for the band’s collective chemistry. Increasingly wandering into acoustic and psychedelic pastures, rambling behemoths like opener The Moor and Moonlight Vertigo still had audible roots in death metal, but this was the sound of a new strain of esoteric heaviness being developed in real time.

As the 21st century loomed, Opeth were clearly ready for bigger thingsView Deal

It’s worth noting that at one point, Opeth’s twelfth album was Nuclear Blast Records’ bestselling album on vinyl ever.

By this point, of course, the band were on fire. Sorceress was a tour de force of ingenious ideas, ranging from the Tull-esque twinkle of Will O’ The Wisp and the quirky, harpsichord psych of A Fleeting Glance, to the genuinely astonishing dynamic ebb and flow of Strange Brew.

Even the album’s more straight-ahead moments – the big-metal-riff stomp of the title track, the balls-out clatter of Chrysalis – fizzed and crackled with creative exuberance. Another year, another brilliant Opeth album.View Deal

With no death metal vocals, but with distinctly non-metal guitar tones and a very noticeable penchant for wonky jazz, Heritage was an album designed to ruffle feathers.

In truth, songs like perennial live favourite The Devil’s Orchard and the Dio-saluting Slither were very much in keeping with Opeth’s freewheeling ethos, it’s just that extreme metal was no longer an essential part of the band’s sonic make-up.

An album full of startling moments, not least Åkerfeldt’s extraordinary guitar solo at the end of Folklore, Heritage was a fearless leap forward and a hugely important milestone for Stockholm’s finest.View Deal