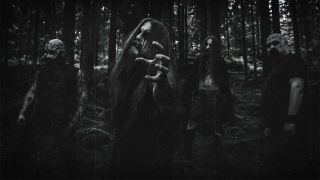 Thirteen years ago in the small Norwegian town of Halden, the extreme brutality of Mork was forged. Initially seen as a side project by Thomas Eriksen, the band has since become a full-time gig and Mork’s latest album Det Svarte Juv is out now via Peaceville (Scroll to the end to check out track På Tvers Av Tidene).

With inspiration taken from the early Norwegian innovators like Darkthrone, Thomas is something of an aficionado when it comes to True Norwegian Black Metal, not least because of the close-knit community in which his band now inhabits. So who better to ask to pick the ten best TNBM bands?

Elitists, this one is for you.

“To me Burzum is one of the most important black metal acts ever – he has made true magic with his music. I do enjoy all the albums up to Umskiptar. After producer Pytten closed (recording studio) Grieghallen’s doors, Varg chose to make synth albums on his wife’s Mac, and those have not held up for me, personally.”

“Another important band for me and my music. I like the variety within the Darkthrone catalogue. Obviously their early black metal albums are the most powerful to me, but I do like the black ‘n’ roll, punk and heavy metal stuff as well.”

“Black metal is a vast genre and that’s okay. Dimmu Borgir has the production and majestic thing about them. They make it work really well and I do enjoy most of the albums. My favourites include Puritanical Euphoric Misanthropia, Death Cult Armageddon and the remake of Stormblåst. They unleash a new album next year and we will see the return of Dimmu Borgir.”

“What I like about this band is the brutality, the somewhat-aggressive production and the fact that the music is unique. Hellfire and Demonoir are among my faves, they are mammoths of albums.”

“A band with characteristics and their own way and sound. From classic blast-beat black metal up to the more recent black ‘n’ roll-ish stuff, I find most of their releases being high quality.”

“The classic necro beginnings of this band have given me much pure black metal feel and atmosphere. However, my favourite album has to be the more recent Ad Majorem where King did his magic within the songwriting.”

“The Norwegian all-star band debuted live around the same time as Mork, both of us in Poland, actually. it’s original Mayhem members doing heavy Celtic Frost-ish black metal in 2017, which is quite cool. Considering the guitarist also played guitar for Celtic Frost for a while, it can’t hurt either.”

“I need to namedrop current Mork drummer’s solo-project, as well. Malignant proves he is capable of more than just hitting the skins in Ragnarok and Mork. Dauden is quite original and I can tell you that the new album will kick ass. We are currently mixing it in Mork’s Rottehullet Studio.”

“The locals stick together. Ragnarok is from the neighbouring city to Halden, Sarpsborg. The band has earned cred from it’s longevity, debuting in the mid-90s. Jontho recently jumped from the drum-stool and into the frontman duty – a fitting move considering he is the only remaining member of the original line-up. He has done a good on the latest album, Psychopathology.”

“More locals! Halden, Sarpsborg and Fredrikstad are all in a happy neighborhoods. The latter city mentioned is the home of Kampfar. They’re another long-lasting band, spawned from the bands Fester and Mock, if I have my facts straight. Kampfar only seem to get better and better in recent times, they’re really making a good name for themselves.”

Mork’s new album Det Svarte Juv is out now via Peaceville and has garnered fans such as the legendary Darkthrone, the infamous Blasphemer, formerly of Mayhem, and the venerable Seidemann of 1349. The album is available to order now.