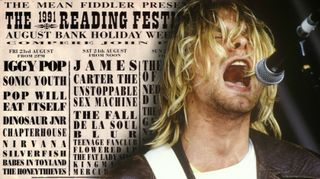 Nirvana’s headlining performance at the Reading Festival in 1992 – their last ever UK show – has, in the years since, been acclaimed as one of their finest ever live concerts. The show, later released on DVD and album, regularly tops magazine and fan polls as one of the Seattle band’s finest ever moments and their best UK gig.

Great and memorable as the show was, it’s arguably not even their best performance at Reading – that came 12 months earlier when they performed as (relative) unknowns towards the bottom of the opening day bill and provided a UK crowd with their first taste of Smells Like Teen Spirit and other songs from Nevermind, the life-altering album they’d recorded earlier that summer and would release just a month later.

That often overlooked Reading show – which took place 25 years ago this week - would be their last in the UK before their second album catapulted them to major rock stardom. By the time they returned to the UK in November 1991 for the Nevermind tour they were already well on their way to becoming one of the biggest bands in the world. Reading 1991 provided ardent UK fans with their last glimpse of the trio before everyone else caught on and caught up. Before the drugs, before ‘Kurt and Courtney’ and before all the fucking drama. When they were just a great band with massive, exciting potential. And brilliant songs.

Looking back, it was a rather unlikely success. Performing on the largest stage they’d played in the UK, in the middle of a Friday afternoon when many festival goers were still arriving, Nirvana began on familiar ground with Bleach mainstays School and Floyd The Barber. Next up was a four-song showcase of new material from Nevermind: Drain You, Smells Like Teen Spirit, Come As You Are and Breed. Eugene Kelly (from the Vaselines, later Captain America/Eugenius) joined in on Molly’s Lips and their mad dancer that looked like Jason from Friday the 13th movies made shapes throughout. Love Buzz, Negative Creep and Blew followed along with a loose take on The End by The Doors. Kurt Cobain crowd-surfed with his guitar and capped off the 45-minute set by launching himself into Dave Grohl’s drums at the conclusion of Endless, Nameless (as seen in the video for Lithium) and dislocating his shoulder. Drummer Grohl recalls the accident and the possible reason for the frontman’s recklessness at the end of the set – a bottle of cough mixture.

“He had some kind of incredibly potent cough syrup [Covonia Bronchial Balsam], and he was carrying that thing around like a ﬂask,” Grohl later told the New York Times. “It led him to dive into my drum set, which put him in a sling for the rest of the night. That gig was deﬁnitely a triumph.”

It was. It was chaotic, it was loud and it was phenomenal. It was the highlight of that year’s festival and it was all over too soon.

Afterwards, the band mingled backstage with members of Dinosaur Jr., Babes In Toyland, and Sonic Youth who were all on the same day’s bill. (Footage of this can be seen in the movie The Year Punk Broke.) Cobain wandered around, his arm in a sling, grinning maniacally for photographers, and doing interviews. His future wife Courtney Love was also part of the raucous American posse but this was a few months before the soon to be notorious couple “bonded over pharmaceuticals” and he’d declare her “the best fuck in the world” on live TV.

By the time Nirvana returned to top the bill at Reading 12 months later, much had changed. The band had topped the charts around the world but become tabloid fodder thanks to the newly married couple’s tempestuous lifestyle. There were rumours the band might not even turn up due to the recent birth of the couple’s daughter, Frances Bean. Tensions and expectations were high – in stark contrast to the previous year when they’d had little to prove and a billing to match. This time they had a headliner’s reputation to live up to.

All fears were unfounded, of course, and Nirvana delivered one of the finest performances of their career to close the festival on the Sunday night in front of an estimated crowd of 60,000. Their UK festival swansong was a resounding success, surpassed, perhaps, only by their debut.