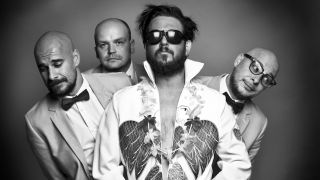 Sometimes, it all gets a bit weird here on Planet Earth. We had Nudist Priest, hairy, naked blokes ripping through Judas Priest numbers. Then we got Tragedy, the all-metal tribute to the Bee Gees. And now, Elvana, a Nirvana tribute fronted by Elvis. Hailing from Newcastle-upon-Tyne (one of them might be from Graceland, though), the four-piece comprises Elvis, Danny Cobain, Rob Novoselic and Bobby Grohl. We speak to the King himself to try and make sense of everything…

Elvis Presley and Nirvana: two world-changing, iconic acts. Whose idea was it to fuse them together?

“It just started out as a stupid conversation about a year and a half ago. We’ve been doing music as long as we can remember – we’ve been in and out of bands trying to make it and release CDs, but nothing particularly happened. Danny, our guitarist, said he was interested in doing a cover band. I’ve never been one for doing covers; I much prefer doing original material and all that. Danny said he wanted to do a bit of his favourite stuff: a bit of Nirvana and a bit of Elvis Presley, and that’s literally where it came from. Just saying: ‘Ha, wouldn’t it be funny if we had Elvis singing Nirvana. Of course you’d call it Elvana, wouldn’t you? Hahaha.’ Then there was this moment of silence. ‘Elvana? Could we… nah, that’s just bollocks, right?’ We kept coming back to the idea and did a rehearsal – it works a lot better than you’d think, especially with songs like Aneurysm, School and Lithium. I’m not gonna profess that I’ve got the greatest Elvis impersonation in the world, but I’m working on it!

What appeals to you most about each of them?

“I think Kurt Cobain was probably an Elvis fan, because of his respect for the whole myth of pop icons and writing pop tunes. Although Nirvana are a heavy grunge band, there was also a pop ethic to everything Kurt wrote. If Elvis had been alive and heard Nirvana: MTV Unplugged in New York, he’d have thought it was absolutely amazing how they break those tunes down so you can see how well-written they are. Both bands have an incredible understanding of pop music and how to write a hook.

“There’s also the performance element. Despite Nirvana having that punk rock, smash-your-guitar ethic, there was always a performance there. Kurt knew how to underperform, whether they’re smashing their guitars or Kurt’s coming on stage in a wheelchair with a blonde wig on. He always performed but he made it look effortless – kinda off-the-cuff and scruffy. The two artists would have totally respected each other. Y’know when you see Elvis doing his comeback tour and they sit round in a circle, just jamming out the song? I can quite easily see those two characters sitting down comfortably, just jamming out tunes and enjoying the music.”

What can we expect from the Elvana live experience?

“We try to keep it quite brief in our videos, because we want that ‘I’ve got to go see this because it’s just… strange’ reaction from people. Obviously we play the straight-up Nirvana tunes for the Nirvana fans, and then we drop in a few Elvis breakdowns.

“When you see a Nirvana cover band, you have this preconception of what you’re going to watch. You stand there and they’ll impress you or they won’t. You’ll be wondering how good the drummer is, if he’s doing the right parts; do the vocals sound right? With us, before anything else, they see this guy run on stage in an Elvis jumpsuit and they’re laughing. They’re kinda laughing at me and that’s fine, because all of a sudden they’re singing along; there’s a lot more engagement than if you just see a straight-up cover band. When we do the Elvis parts, like Suspicious Minds or In The Ghetto, they’re the points where the crowd are singing along the most. They go absolutely crazy for the Elvis parts.”

Have you received any backlash for blending two of the most beloved artists in history?

“There’s an element of Marmite to it. When people hear about it, we think it’s hilarious because we get people posting really insulting comments on our social networks, like how dare we do that to Nirvana or Elvis. We’ve just used those comments as adverts on our posters: ‘This is the worst thing I’ve ever seen!’, ‘What is this bag of shit?’ We’re massive Nirvana and Elvis fans, and we’re doing this with the utmost respect for the artists. When people see us, if there was any concern that we weren’t respecting the artists, it goes away as soon as we start playing. We’re not just playing Nevermind – we do stuff from Insecticide and Bleach, and the Nirvana fans absolutely love that.”

Do you feel a certain responsibility when you don the white jumpsuit?

“You need the jumpsuit – obviously I don’t wear it when we’re rehearsing. But when the jumpsuit goes on, the hair goes up, the shades are on and the fake tan’s slapped on, the jewellery comes out and that’s the moment when you start flexing about, doing Elvis kung fu moves in front of the mirror and posturing and all that. As soon as that happens – a couple of beers help, too – that’s when it all comes together and you’re in character. There’s definitely an element of wanting to do the best Elvis impersonation possible, but because we’re doing it Nirvana style, we can do it in a punk rock way. It’s not glitzy Elvis; it’s punk rock Elvis. My Elvis swears a lot – he’s a nice guy but he’s got a potty mouth. I come on stage munching on cheeseburgers so it’s all a bit greasy and scruffy. My Elvis impersonation sits somewhere between Samuel L. Jackson and, I don’t know, someone like Nicolas Cage. In all honesty, that’s what adds to the charm – it’s just an everyday, slightly-dodgy Elvis. We all love to watch a dodgy Elvis impersonator.”

Elvana tour the UK in September and October.