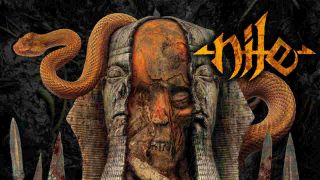 As metal’s ‘nu’ millennium dawned, a certain breed of headbanger was feeling both alienated by mainstream trends, and dispirited by death and black metal scenes well past their prime. We’d already praised Ra for South Carolina’s Egyptophile death cult Nile after their stellar 1998 debut, Amongst The Catacombs Of Nephren-Ka, supported with relentless touring and fearsome word of mouth. Hopes and expectations were high, but when Black Seeds Of Vengeance exploded in the autumn of 2000 and we were flayed to the wall by its obsessive brute force, finally, death metal had a new scene leader. For Karl Sanders, Nile’s chief songwriter, multi-instrumentalist, guiding light and sole surviving founder member, it wasn’t just vindication for years of struggle, sacrifice and commitment, but also for the highly fraught process of making the LP itself.

“Nothing went to plan on that record,” Karl intones, in a sedate but cultured Deep South drawl, when Hammer interrupts him putting new riffs to new lyrics in his home studio. Occasionally, endearingly, he punctuates the end of a sentence by idly strumming a chord on an unplugged guitar. “We had spent many long months rehearsing the songs, and we were really over-touring, playing our hearts out, because this was our freaking chance, finally. After a decade trapped in South Carolina we were hungry, so we were playing our asses off.”

One brutal consequence of this Stakhanovite slog was that shortly before recording, drummer Pete Hammoura – Karl’s friend and bandmate for 10 years before co-founding Nile in 1993 – suffered a shoulder injury that would never fully heal. Determined to complete recording despite the pain, Pete spent two weeks working on drum tracks before facing the sad realisation that a replacement was needed.

“That was really heartbreaking,” stresses Karl, still audibly bummed out by the memory. “Pete and I were best friends, we played in many bands – even dated the same set of twins! He’s like family to me, still is. But we were halfway through our allotted studio time, and instead of making a record in a month, we’ve now got basically 11 days to do everything. The money was running out, we were all broke, so we had to buckle down and work round the clock ferociously.”

Luckily, Karl was buddies with Derek Roddy – then a fledgling session drummer with a few second-division records under his belt, now one of extreme metal’s most respected and influential percussionists.

“He didn’t have that reputation at that point!” laughs Karl. “He was just our wacky friend, a guy we knew and loved who was in our little circle of life. But he was the right guy at the right time. By some stroke of fate or planets aligning, he wasn’t busy when we called. He drove up to South Carolina, he’d never heard the songs – this sounds like a made-up legend, but he set up his drums, put on the headphones, listened to [the demo] once, said, ‘OK, gimme the click’, and in his first take did nearly half the fuckin’ song. And the tracks were totally keepable. We were all like, ‘Holy shit!’

“And that’s how we worked – it was first or second take on every section of every song. It was mind-boggling, his capacity to realise what he needed to do and execute it right there, on the spot, because we knew very well there’s no second chances if we fuck this up. The pressure was on, and Derek really delivered.” Karl quickly makes sure to share the plaudits around: “But everybody making that record had to rise to the challenge. This was a real growth for us, it was proving we could push ourselves to the next level.”

For Nile, the dissolution of their original three-piece line-up was a corollary of their hard-fought ascent to metal’s world class. Bassist Chief Spires fled soon after the Black Seeds… tour. “There was animosity there,” admits Karl in a low murmur. “He wasn’t happy. We didn’t have enough time to properly record things with the bass on this record like we wanted to, so I’m sure that was a factor,” he concedes, although he also remembers Chief’s last band meeting, where the bassist claimed that his new nu metal band would sell “five times more records” than the 50,000 that Black Seeds… shifted (“That didn’t work out quite the way he thought it would,” quips Karl drily).

More happily, this was Dallas Toler- Wade’s first Nile record, the guitarist bringing in his own two-minute mummy-blaster of a song, Multitude Of Foes. “There was no stopping that guy,” Karl remembers. “He was very highly driven, which I related to very well. For many years Dallas and I were very close teammates working in concert together. It wasn’t until many years later that changed.”

With such a rigorous schedule, Karl says, inter-band relations were bound to strain. “We were a young band at the bottom of the bill, trying to prove ourselves everywhere, and having to be our own security onstage,” he says. “There was a lot of violent incidents  on that Black Seeds… tour. We were fighting off stage moshers, people were running in and crashing into us. Those were violent times.”

With such a complex, expensive set-up – guitars, synths and computers, all pedal-operated – the band had to defend their property with physical force. “I understood the equation: if I let somebody stomp all over my fragile synth gear, I’ve got no show the next day,” he reasons. “If you’ve got small children and a job, the amount you’ve taken care of just to go on tour, you’re heavily invested. No one was helping pay for plane tickets, you’re doing it on your own dime. Our families were all broke; what little money we made we sent home, because if you don’t, the wife can’t pay the rent. I wasn’t a young foolish kid at this point, I understood all the ways things could fuck up.”

With its jaw-dropping intensity, layers of unorthodox instrumentation and frantically wired performances, Black Seeds Of Vengeance was anything but a fuck-up. Nile’s Ancient Egypt ‘unique selling point’ was pushed to new levels, with frenzied ritual atmospheres conjured by home recordings using instruments discovered in world music shops, such as the bağlama-saz (a long-necked lute) and Tibetan hand drums. He had even spread Egyptian textbooks across the house, and has since begun printing the lyrics out on yellow parchment, to get him into the right headspace for making such distinctive music.

Despite these extraordinary efforts, the result did not match up to Karl’s exacting standards. “Black Seeds… is actually a terrible fucking mix,” he asserts. “I can hear the pressure, it’s really under the gun. That made some of the dark energy even darker, because there’s a desperation to it; it’s definitely ‘do or die’.”

So how did Karl feel when Black Seeds Of Vengeance quickly took on such momentous life of its own? After all, it’s still hailed amongst the genre’s finest works to this day. Nile’s contemplative bandleader brings our conversation to a fitting close, in a philosophical mood. “It touched people,” he says. “They were able to get something they wanted from it, which I believe is the songs, the violence, the energy, the darkness of it. That’s what matters. This record is far from perfect, but there is a vibe to it… there’s a definite violence. If I had to choose between violence and evil or technical perfection, I choose violence and evil!”