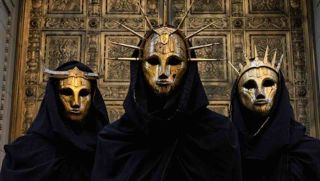 Crazy times deserve a crazy soundtrack, preferably one played a bunch of weirdos in sinister masks. Wait, we’re good. Imperial Triumphant have got it covered.

This three-piece from New York are releasing their new album, Alphavlle, next month, and it’s hands-down the best thing I’ve heard in so far this year. It’s a mad-not-mad scramble of extreme metal cacophony, jarring avant garde blowouts, clanking pianos played by jazz demons from the seventh dimension, trés pretentious references to 50s French movies and even a WTF cameo from a barbershop quartet at one point. This is what Hell’s jazz club sounds like.

Full confession: I’m late to this party. IT are already 15 years and three albums deep into their career. But what they’re serving up on Alphaville feels kind of revolutionary. It’s what metal should be doing in 2020: pushing forwards, warping dimension, necking a massive amount of mind-altering drugs and realising there’s everything to play for. The fact that Alphaville is produced by Trey Spruance of crazy-metal provocateurs Mr Bungle and features an appearance by Meshuggah’s Tomas Haake tells you pretty much where Imperial Triumphant are heading. (The masks? Not to sure about where they fit in, TBH. But they look cool. And let’s face it, looking a members of a Satanic sci-fi cult has never hurt anybody’s career. Just ask ask Ghost.)

Alphaville isn’t out until the end of July, but IT have let one of their twisted devil-children run free – Rotted Futures should give you an idea of what the fuss is about. Sure, it’s not for everybody. But if you want a glimpse of all the brain-frying potential metal still has in its soul, the doors of Hell’s jazz club are open.