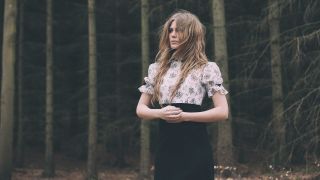 “I was in this building, like a warehouse, and some people were after me. I was with a group of people that I know in real life. My mother was there, too, but then she suddenly had a scorpion hanging from her upper lip. Someone in the group punches her in the face to make the scorpion fall off, but it falls into my leather boot and I can’t get it out. It’s stinging me really bad and I’m screaming, ‘Help me get this out!’ but they’re all laughing at me…”

Two years ago, Amalie Bruun started to have nightmares. Not just the weird and occasionally unsettling dreams that have long haunted her slumbers, but the kind of harrowing unconscious hallucinations that caused her to scream herself awake. The dream she’s recounting to Metal Hammer today, she explains, isn’t even one of the bad ones. It’s just a recent dream for which she hasn’t yet reached a satisfactory explanation. In fact, Amalie has recovered from that prolonged spate of disturbed sleep but, in the form of her increasingly revered alter-ego Myrkur, the Danish musician is about to release an album that promises to drag us all into her dark, subconscious depths.

“I definitely think that your subconscious is processing everything that goes on in your life, but I do believe that it’s deeper than that,” Amalie explains. “I believe in a collective subconscious. I think there is an energy and a universe that, if you can tap into it… well, I don’t know if you believe in psychics or people having visions, but I think that dreams have that element in there too, that for some people they become an almost spiritual and magical thing.”

Myrkur’s rise to prominence in an often snooty underground metal scene has been one of the more intriguing and satisfying things to watch in recent times, not least because Amalie is plainly a unique and subtly contrary antidote to just about everything else that’s happening in heavy music. From the intimate ferocity of her eponymous debut EP to the more expansive, but no less intimate, full-length album M in 2015, her musical evolution has already been fascinating enough to turn an otherwise under-the-radar enterprise into one of the coolest names to drop in metal circles. On a superficial level, all of this newfound attention and promised success should have enabled Amalie to forge ahead happily. Instead, as she recuperated after a long period of touring in support of M, the nightmares began…

“After the debut album, we toured a lot, and everything became about creating a live show, which I really didn’t want in the beginning. I didn’t want Myrkur to be a live project at all,” she states. “But we did it and that took so much energy from me, and other people, to make that happen. I was so sick and tired after it. I hadn’t even picked up an instrument voluntarily for months, let alone written a song. I was completely uninterested in it. I think that’s pretty classic, maybe? I wasn’t feeling great either, on a personal level, but then I had all these nightmares for about two years. I’ve had nightmares and bad sleep my whole life, but this was really bad.”

Amalie goes on to explain that the bad dreams were absolutely remorseless and intense for many months, disrupting her sleep every single night and making life extremely difficult for her then boyfriend, who was routinely woken by the sound of Amalie’s screaming. “It was horrible,” she remembers. “So I went into Jungian therapy and then, when I began to write down the nightmares, it started to become an album.”

I t seems safe to say that no one reading this will hear a more idiosyncratic metal record in 2017 than Myrkur’s second album, Mareridt (which, as you might expect, means ‘nightmares’). A further step into brave, wildly imaginative territory, it showcases the blossoming of an extraordinary and highly individual talent. With moments of vicious aggression punctuating eerie, lysergic soundscapes and gently perverse folk instrumentation, it’s as surreal and disarming as you might expect a gleeful plunge into a sensitive artist’s troubled psyche to be.

Sung primarily in Amalie’s native Danish, English and Norwegian, it’s an album that uses her voice as a guide through psychological landscapes and amorphous, whispered horrors, with everything rendered in vivid shades of monochrome by producer and collaborator Randall Dunn (Wolves In The Throne Room, Sunn O))), Earth). “I wanted to take the best parts of the debut album and make them better, make them more concise and punchier,” Amalie explains. “It had to be a punch, not a stroke! It just happened to work out this way, particularly as I was working within this universe of dreams… I wanted it to feel like a nightmare, so it’s all very disorientating, levitating and floating, those feelings when you don’t know what’s round the corner, who’s chasing you and when can you wake up? Randall totally understood where I was coming from. I knew he was the right guy for the job.”

The other major collaboration on Mareridt arrives on the song Funeral, a duet between Amalie and one of her most obvious peers, Chelsea Wolfe. Although understandably reluctant to portray the team-up as anything more than a shared experience with a good friend, it does seem like a match made in heaven, as two of modern heavy music’s most distinctive female voices collide. “I do think the song is a good representation of her universe and my universe, and maybe another whole other thing, too,” says Amalie. “Besides the fact that her and I have become friends, I just wanted us to make music together like back in the day when PJ Harvey and Björk did it. A lot of people may consider Chelsea and I to be rivals, but this was a great opportunity to work together and have fun. Actually, I really want to do a video for the song, but I don’t know if we’ll be able to do it… it would be like a dark, metal version of Abba!”

Amalie chuckles quietly to herself, amused by the thought of the inevitable backlash from the black metal scene if she dared to make a video with even the merest hint of cheesy Scando-pop camp to it. But then it’s obvious that this articulate and thoughtful 32-year-old has more than enough awareness, and self-awareness, to negotiate the potentially upward road ahead. A decade ago, Amalie was forging a very different career under her own name in more mainstream, indie-pop waters, releasing a self-titled album in 2006 and mingling in circles that could hardly be more different from the humbly grubby metal underground. But if cynics are wondering why she abandoned a pop career to transform into Myrkur, there is a clear and unequivocal answer.

“I just don’t take part in the music industry, to be honest. I saw what I needed to see and I said, ‘No thanks’, you know?” she says with a shrug. “I didn’t create Myrkur to become some puppet and nobody can tell me what Myrkur is. It’s so funny, I have all these people online that are always hating on me and saying I don’t know what black metal is and blah, blah, blah… I always say, because people ask me how I deal with it, that people in the metal scene sometimes think they’re really dark, but if you want real darkness, go to the pop industry!”

With that in mind, is there a level of success you can imagine that would set alarm bells ringing and have you running for the hills? Is fame something you’d relish, or something that would ruin everything you’ve built so far? “I think the industry people let me live in the belief that this isn’t really a career – it’s just the woods and me!” she beams. “I prefer it that way. If I can smell a music industry vibe, I want to puke. So I do think it’s going to be a problem for me in the long run, but there’s got to be a way to be able to make music and not be constantly run down and unable to be in your natural element. I don’t have any ambitions about being some sort of Lady Gaga-level artist. So it’s got to be possible to be within metal, folk or shoegaze, whatever it is that I do, and not be totally unhappy, right?”

Perfectly placed to disprove the tired notion that extreme music can’t possibly reach a wide and varied audience, Amalie has just completed work on one of 2017’s most important and distinctive albums. Not just a graceful stride towards bigger and better things, it’s a fervently personal and yet effortlessly mysterious journey through one woman’s unknowable subconscious. And yes, the nightmares that plagued Amalie and provided so much disquieting inspiration have finally receded, leaving their ostensible creator with plenty of questions, a degree of closure and a strong sense that confronting the dark is good for the soul.

“I wasn’t in any way counting on it being any kind of therapeutic experience,” she says. “It’s more like an exorcism, like, ‘Here you go, I don’t want them any more, you can have them!’ But I do feel a little better. I sleep better now, so it really has helped me. I can recommend creating something from your dreams.”

Mareridt is out now via Relapse.

Psychoanalyst Warren Colman explains what Jungian dream therapy’s all about

So, what did Carl Jung think about dreams?
“He thought they were a a kind of message from the unconscious part of the self. So if you can learn to understand the symbolic language, they can help you to grow, by integrating the aspects of yourself you might not know about. It’s about facing your demons.”

What does Jungian therapy involve?
“It could vary between just talking about your dreams to getting an interpretation of them. A lot of Jungian analysts might use a process that Jung called active imagination, where you might write it down, or draw, paint or sculpt – some kind of art embodying the dream. And also this process of having a dialogue with inner figures. A common idea is that if you’re being chased by a monster figure in your dreams, if you can find a way of turning and facing it, getting to know more about it, actually getting into a dialogue about it, you’re more likely to find out what it’s saying to you. Things are frightening when they seem meaningless. Once you begin to get some sense of the meaning, they become less frightening. And of course having a therapist there who’s a consistent figure helps a lot and also takes some of the fear out if it.”

What do you think Amalie’s scorpion dream could represent?
“It sounds like this is some aspect of her mother, but it’s also got something to do with her. It’s something that’s maybe poisoning her relationship with her mother, so I’d want to think about what might be scorpion-like in the relationship. Another way might just be to focus on the image, so other analysts might say, ‘Find out everything you can about scorpions, and allow that image to develop and see where it takes you.’ It’s interesting that the scorpion transfers from the mother to her – it’s something you can’t fight directly, you can’t just punch it in the face, something more complicated is needed.”

Find out more at www.thesap.org.