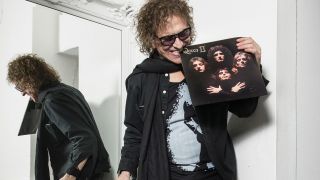 “You’ve gotta start with The Everly Brothers and Buddy Holly And The Crickets, then I was into The Beatles, the Stones and right from the first album, Bob Dylan. It’s his lyrics.

It’s his lyrics. I studied poetry at Cambridge and read about all those absolutely banzai 19th-century poets who took God knows what, stayed up for months on end, sex, no food, no sleep. I thought, ‘I can do that and be a great artist? I’ll have some of that!’

But what connects these artists and my more progressive stuff? It’s a simple answer: LSD. I took some LSD and picked up a camera. It was 1966 and a cultural switch flipped. A mate of mine turned me on to acid and we’d go to London and see this geezer who lived on Cromwell Road. He was a painter, and obviously out of his mind. He had a bottle and a dropper: ‘Take that, that’ll be your dose.’ Under the influence I saw the entire universe unfolding… That had a profound effect, especially when you’re 18, 19. My musical tastes reflected the time – I’m right in the middle of a cultural revolution.

Anyway, some heads called Viz, Emo and Pip told me they knew this guy in a band called Pink Floyd. They said, ‘Come down to the Christmas party at the art college and see them.’ First I met Syd Barrett’s girlfriend Lindsay Korner, and I thought, ‘Wow, just my cup of tea,’ then I saw him play and he looked and sounded extraordinary. It was music I’d never heard before. And there was this great light show, which I found out later that their guy had been to San Francisco and seen what they were doing. Floyd had no records out yet – neither did Soft Machine, or Arthur Brown, who I really loved and got to work with later on Kingdom Come – but by Christmas ’66, Hendrix’s Hey Joe would be released and that properly flattened me.

1966 was the warm-up. By the summer of ’67 you’ve got Sgt Pepper and the West Coast stuff. I was friends with a guy called Steve, a wild-looking character who’d been to Berklee College [in Boston] and he got records sent over from the US. I discovered the Grateful Dead and Country Joe And the Fish. Then Love showed up, and The Byrds with Eight Miles High – we all knew what that was about. So I was hanging out with these characters, and it was dangerous and exciting. Nowadays if you want to be a bad boy you just have to whip out a cigarette.

Then there was* The Velvet Underground*. The debut album [The Velvet Underground & Nico] was a complete commercial loser. Although radically different from Floyd, they shared the same context in that you couldn’t find the root of the music. It wasn’t like anything you could bloody pin down. All this different stuff, to a 19-year-old it was like landing on another planet.

My friendship with Syd was surprisingly simple. We shared a flat and he was nice to be around. I remember Syd laughing a lot, but people would say, ‘He took a trip and now he’s really weird.’ He wasn’t weird at all. We took trips, played music, read Robert Crumb comics and played a [Chinese strategy] game called Go. He had lots of jazz records and the mind of an improviser, going off in multiple directions all at once. With The Madcap Laughs he was astonishing, doing things that no one had done before.

Then there’s David Bowie. Felix Dennis, who ran Oz magazine, let me use his darkroom to develop photos. He had a stack of promo vinyl, said, ‘Help yourself,’ and one I picked up was Hunky Dory. I don’t remember_ Space Oddity_ first time round – it wasn’t like the stuff I liked, which was kinda subversive. But Hunky Dory was remarkable. David’s reaching in a number of directions and it’s got some philosophy in too. Once I got to meet him, it wasn’t about his obvious intelligence, but he had a certain kind of awareness and was very articulate, none of this ‘I do rock’n’roll and have a shag’. The first time I met him it was to do an interview and take pictures, then I got into him and kept going to the gigs. We fed off each other intellectually and he developed so fast, right in front of my eyes. He was mesmerising – he hypnotised me for the Ziggy Stardust period and I had to get away from him for a bit afterwards to get him out of my head.

Luckily I had people like Kevin Ayers to distract me. He was a louche soul – some called him lazy. He was good to listen to, nice to work with and seemed to have everything. He didn’t do a Syd with drugs; he dabbled. He told me up front that he wanted to be a star. Projection was everything and he was at his peak with Whatevershebringswesing. I was also taking pictures of Genesis at this time, Peter Gabriel with his reverse Mohawk and the rest of the guys. Foxtrot is a highlight ’cos he looked quite good in that dress – that was some presence he had.

Which was also my first impression meeting Queen, where Freddie Mercury was already acting the star. I vaguely knew ’em through Ken Scott, who produced Hunky Dory. During the Pin-Ups photo session, Ken told me, ‘They want to meet you.’ It was glam time, I was the glam photographer, so with their bit of lippy and nail varnish they identified with me. We were discussing Queen II and they needed press pictures, so bingo. Then they played me the album and I went, ‘Fuck!’ It was a completely new sound. I said, ‘It’s Ziggy Stardust meets Led Zeppelin’ – and I was in.

And then you’ve got fookin’ Transformer [grins]. I shot [Iggy And The Stooges’] Raw Power image and the Transformer image a week apart, at King’s Cross Scala, which was a cinema back then. Lou Reed wasn’t into fashion – that was Angie Bowie who got him outfits. Lou was an intellectual, and we could spark off each other like I did with David. He was a poet too, and on this album he pushed rock’n’roll into an era that was led by New York tales.

It was an exciting time and I got caught up with punk more there than here, ’cos that’s where the best drugs and girls were – sorry, mother! One night in ’76, Lou took me to CBGBs and we saw Talking Heads, when they were just a trio. By Talking Heads: 77 they were hot, and much more art rock than punk. They looked like something out of Village Of The Damned, definitely after an alien look, and creators of another completely original sound.

What a soundtrack – and that’s just the tip of it. Somehow I had the right name, looked the part and was sideways enough for these characters to be interested in me. It was either that or poetry…”

Mick’s new book Exposed is out now via Palazzo Editions, and his range of limited-edition Bowie T-shirts can be found at http://www.prettygreen.com.