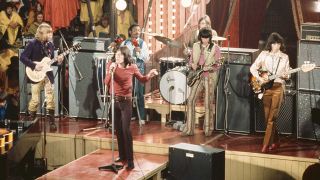 The Rolling Stones on the set of the Rock and Roll Circus at Intertel TV Studio in Wembley (Image credit: Mark and Colleen Hayward / Getty Images)

It was dreamed up in 1968 as a superstar-packed extravaganza that would re-establish the Rolling Stones as the undisputed rulers of rock. Instead the Rock And Roll Circus reduced them to clown princes.

As the Stones stormed back from a period of inactivity with a classic album, Beggars Banquet, they lavished a £50,000 budget on an ambitious TV special in which jugglers, fire-eaters, midgets, trapeze artists, cowboys and Indians mingled with rock’s elite and some of the hottest new talent.

Filmed on a chilly December day in front of an invited audience of 300 at InterTel, the former Ready Steady Go! studio in London, it was planned as a TV spectacular proclaiming the return of the greatest little rock band in the world. On the day, however, nothing went to plan and the Stones learned that you can’t always get what you want.

Glenn Cornick (bassist, Jethro Tull): The musicians went in early. I have vivid memories of this. Maybe eight in the morning.

David Stark (audience member): It was December, and pretty cold in a cavernous studio.

Chris Welch (journalist, Melody Maker): I remember everybody being a bit off-hand, rushing about and slightly confused. Trying to talk to the artists was quite difficult because they all seemed very preoccupied.

Keith Altham (journalist, NME): John Lennon, the millionaire, sat perched on amplifiers and boxes in his old blue denims – a hole in the elbow, biro marks on the well-worn knee.

David Stark (fan): The artists were not far away from the audience and just chatting. A nice, sociable atmosphere. At one point I went to the loo and walked past a group of four guys having a chat – Lennon, Mick Jagger, Pete Townshend and Eric Clapton.

Ian Anderson (Jethro Tull): Brian Jones wasn’t part of the social or musical framework by that point. Most of the time he was sitting on his own, but he actually came and said hello to us and was quite pleasant, and borrowed a guitar pick because he didn’t seem to have one of his own. You could see he wasn’t in very good shape. He was the Stone From Planet X. That’s how it appeared to me.

Glenn Cornick: They attempted to shoot it in order of appearance in the film, which was probably the biggest cock-up they made, because it all ran late and the Stones didn’t get to play until the middle of the night.

Keith Altham: It started with a grand parade into the circus ring, with a cowboy on his horse, midgets, clowns, trapeze artists, fire-eater, acrobats. Yoko was dressed as a witch in a tall, black, pointed hat, and John as a tumbler. Keith Moon minced up in black tights covered in bright glittering coloured spangles. Eric Clapton wore a suit of many colours, and Mick was dressed as the ringmaster

Ian Anderson: I got the feeling Mick was the driving force, but the others thought it was all a bit embarrassing for the Stones to be presented in that kind of environment, dressed up as circus clowns.

It was unfortunate that we were between guitarists at the time, so we’d asked Tony Iommi to come and do it with us, which he did with his hat pulled down over his eyes lest anybody should recognise him, and his guitar not plugged into anything. He and the other guys mimed to the backing track, I played and sang live.

Glenn Cornick: The Who came on after us. They did a run-through of their mini-opera with the cameras running and they were faultless. It was not even supposed to be the first take but it was so good that everybody agreed that was it. So that’s what you see on the finished film.

Ian Anderson: That proved to be a problem, because The Who were used to doing gigs, they were in fighting trim. The Stones, on the other hand, hadn’t played together live for a long time, so they were quite rusty and a little apprehensive.

Taj Mahal: We actually got snuck into the country. The problem was that back in those days if four musicians came to the UK from the USA, then four British musicians had to go over there. When we showed up at Heathrow we all had instruments, but we had to tell immigration we were going on vacation.

Michael Lindsay-Hogg (director): To make sure we had him, we shot Taj on the first day. That’s why a lot of Taj is shot close up – we had hardly any audience, and the set was still being built.

Taj Mahal: We recorded four songs, but only one got used in the final cut. Which was a shame because our version of Leavin’ Trunk was the best we’d ever played it, and nobody got to see it till it turned up on the extras on the DVD in 1995.

Pete Townshend: When she sat in the middle of the floor to do her song, I turned to Keith and went: “Fucking hell! Look at that.” She was just so transcendentally beautiful, and self-possessed.

Glenn Cornick: She just lip-synched her song, which was pretty much what you’d have expected.

John Lennon: The first time I performed without The Beatles for years was the Rock And Roll Circus, and it was great to be on stage with Eric and Keith Richards and a different noise coming out behind me, even though I was still singing and playing the same style. I thought: “Wow! It’s fun with other people.”

Glenn Cornick: Keith Richards’ bass was tuned a quarter-tone higher than everything else. It sounded horrendous. But once they had done it – they had used the biggest stars in the world: John and Yoko, Eric Clapton – they couldn’t say: “Oh, the jam was shit. We’re not gonna use it.” Even though it was terrible, they were stuck with it.

Keith Altham: Their second number was an improvisation with Yoko – during which she wailed from inside a bag. She was accompanied by a classically trained violinist. I spoke to him and he described her as sounding “like a cat going through a mangle”.

I thought that was pretty complimentary, considering what it actually sounded like. Towards the end, Clapton was exchanging looks with Lennon, and they all walked off and left her in the bag wailing away. I don’t think she realised everybody had gone.

Glyn Johns (sound engineer): I think the biggest concern everybody had was the audience getting tired – which they did. It went on much longer than anybody anticipated.

David Stark: There were a lot of circus acts interspersed throughout the whole thing… endless retakes, which bored the pants off everybody.

Glenn Cornick: The show was supposed to finish about 11 o’clock and a lot of the audience was teenage girls. Some of their parents were outside banging on the doors, but they were locked so the parents couldn’t come and take the audience home.

Keith Altham: The Stones didn’t get on stage till about 2am.

Marianne Faithfull: It was terribly late and they were exhausted. They gave to everyone else and, in a way, had nothing left for themselves.

John Entwistle (bassist, The Who): That was the period when Brian Jones took six hours to tune up and they were really having trouble getting kick-started.

Glenn Cornick: Brian was totally incapacitated by the time they went on. Somebody led him on to the stage. Somebody actually put his guitar on him, actually put his hand onto the fretboard. His performance was so far out of time, out of tune. Jagger, though, was still doing great, leaping around in his usual fashion.

Ian Anderson: It was Jagger’s energy that got it going. It was impressive to watch how he dragged the rest of the band with him.

Glyn Johns: The audience was flagging until The Who went out in among them and brought the whole place back to life again with their antics. They really re-energised the whole place.

Keith Altham: On the DVD you can see Moon, Townshend and me, during Sympathy For The Devil, dancing in a chorus line with cushions on our heads. We’d got more and more drunk as the day went on, so we were all smashed out of our faces. Filming didn’t end till about 5am.

Taj Mahal: When it was all over we got into some vintage Rolls-Royces with the minders and we drove down to the Thames. I remember walking with Mick and Marianne, along the Thames embankment, at some ungodly hour of the morning.

Marianne kept asking: “Oh, Taj, what class are you?” And Mick was, like, jabbing her in the ribs. I’m saying: “Class? Well, working class.” She still gives me a big hug whenever we meet.

Mick Jagger soon realised that his baby had grown into a Frankenstein monster which, if released, could do more harm than good. Seeing a final cut, Jagger realised the Stones had not performed well and, worse, were royally upstaged by The Who.

Brian Jones died soon after, and the Jean-Luc Godard One Plus One documentary fulfilled the need for a major promotional movie. Before long, some footage went missing, leaving the Circus as a much-fabled enigma until 1989 when the long-lost film canisters were recovered.

Restored and finally released in 1996 – an expanded set came out in 2019, alongside a limited cinema release – it can now be viewed in retrospect as, if not a musical marvel, then at least a charming curiosity of the era.