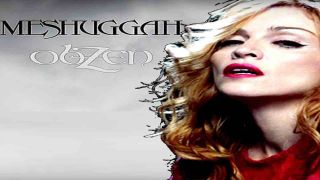 You might have though there were literally no songs left to jam together in a comedy style, but mash-up wizard William Maranci has only gone and proved everybody wrong.

The man behind the mutant Metallica/My Chemical Romance Master Of Puppets/Welcome To The Black Parade hybrid (among literally hundreds of others) has dropped Meshuggah’s 2008 tech-metal juggernaut Bleed and Madonna’s 1985 mega-hit Like A Virgin into the Large Hadron Collider of his mind and slammed them together.

You can check out the results below, and they’re kind of cool. The sound of Jens Kidman snarling over jaunty 80s pop isn’t something we ever thought we’d hear. But really, we’d love to have heard the Queen Of Pop singing about being touched for the very first time over some seriously insane Scandinavian noise written in 13/7 time (possibly).

Over to you, William Maranci…