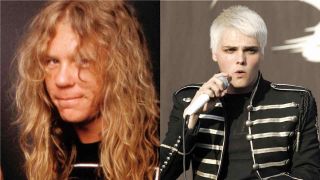 Someone in a bedroom somewhere had the bright idea that what Metallica's  Master Of Puppets was missing was the epic fanfare from My Chemical Romance's Welcome To The Black Parade.

And you know what? They're right. Who'd have thought that James Hetfield's snarling anti-drugs diatribe would sound damn chipper hitched to a 00s emo fanfare. Emo-thrash? Yeah, we'll take it.

Check it out while you wait for that inevitable Cannibal Corpse/Panic! At The Disco banger to arrive.