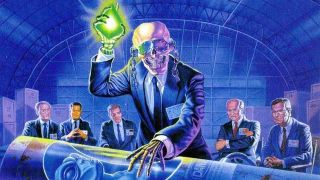 Despite the fact that Megadeth had been conceived and whipped into shape as an act of retaliation following Dave Mustaine’s unceremonious ejection from Metallica, the most musically adventurous members of the Big Four had pursued a calm and purposeful course between the release of their debut album and the chart-busting success of 1988’s So Far So Good… So What!

Lineup volatility aside, Dave was beginning to enjoy the fruits of his labours, as international acclaim and respect for his efforts to push metal forward led to bigger tours, bigger hits and a very evident upward trajectory. Unfortunately, as their momentum increased, the lineup that made So Far… – Dave, bassist David Ellefson, guitarist Jeff Young and drummer Chuck Behler – were in the midst of a collective addiction to heroin that was threatening to derail the band. Things came to a rather calamitous head during what should have been a triumphant trip to Europe to play several shows with Iron Maiden, culminating in a fateful performance at Donington’s Monsters Of Rock Festival on August 20, 1988.

“When we went overseas the drug thing was over the top,” Dave recalls. “We did seven shows with Iron Maiden and the Monsters Of Rock festival – we’d died and gone to heaven. We’d gone there before and when we ran out of drugs, we’d swap to booze. Unfortunately this time the transfer didn’t happen as gracefully as we might have hoped; we had to abandon the rest of the tour and go home. That was the beginning of the end for Jeff and Chuck.”

Despite their problems with drugs, Megadeth were still very much a band in the ascendancy, and expectations surrounding their next album were high as Dave and right-hand man David Ellefson began the task of finding replacements for the departing Jeff and Chuck. Drummer Nick Menza was the first to be recruited, his remarkable skills and knowledge of jazz drumming perfectly suiting Dave’s plans for his band’s next move. Finding a new guitarist would prove to be slightly more challenging, not least because of Dave’s exacting standards.

“It was tough, man,” says Dave. “We were auditioning guitarists and all these guys would come in and start playing and it was terrible. This one guy came in and goes, ‘Alright, I’m ready! Just show me the songs!’ and I just thought, ‘Get the fuck out of here!’ Two days after we’d finished doing the auditions we heard that the manager of the studio was found with his head chopped off, dead in a dumpster. Thank God we weren’t there that day! So we finally go to visit our management company, and there’s a tape of Marty Friedman there. I’d looked at it and he had this crazy coloured hair and I just thought, ‘What a clown!’ and threw the tape down. A couple of months would go by and I’d look at it and throw it down again, but eventually I listened to it because my manager was relentless about this guy. So I heard it and thought, ‘Wow, he wants to play with us?’ From that point, Marty was going to be the guitarist in Megadeth. When I first saw him play for real, I self- destructed. I just thought, ‘Oh my God, this guy is good and I’m so terrible!’”

Prior to Marty’s arrival, Megadeth had already begun work on pre-production demos, at which point the dazzling technical precision and ferociously forward-thinking songwriting that would eventually turn Rust In Peace into such an undeniable metal landmark began to take shape. With reservations, Dave called upon an old colleague to perform lead guitar on the rough recordings.

“We went into the EMI Studio and did a demo of the album and we asked Chris Poland [guitarist on Megadeth’s first two albums] to play on it. I put the demo tracks on the Rust In Peace re-masters because I wanted people to see that Marty, as great as he is, was actually inspired by what Chris did on the demos. We’d already written all of Rust In Peace. In fact, some of those songs had been written a long time before. Rust In Peace… Polaris was a song I’d written and it was called Child Saint, and I’d actually played it when I was in Panic [Dave’s pre-Metallica band].”

With the lineup finalised and all the new material in place, work on Rust In Peace began in earnest late in 1989. Mindful of the fact that the previous lineup had reached the point of collapse and squandered its potential, Dave had no intention of allowing his fourth album to fall short of anyone’s expectations. And so it proved: the songs were the band’s most ambitious and impressive to date, with startling epics like Holy Wars… The Punishment Due and Tornado Of Souls showcasing a whole new level of musicianship that surpassed any- thing else that was going on in metal at the time. Nick and Marty had helped to turn the band into an unstoppable machine.

“It happened like that because we were in the studio playing these songs for so long before we made the record,” says Dave. “It was the repetition, going over every song over and over again. We’d gone from having the luminescence of a candle to being a photon beam. I wanted to make this super-metal, jazz-influenced record, and I had the guys to make it happen. When we finally went into the studio it was like, ‘OK, it’s time! Let’s make some magic!’”

The album was recorded at Rumbo Studios in Canoga Park, California, which was owned by peculiar pop duo Captain And Tennille. Megadeth’s choice of producer made far more sense, however. Fresh from helping Guns N’ Roses to conquer the planet with Appetite For Destruction, the now legendary Mike Clink had also produced albums for UFO, Heart and Jefferson Starship and was one of the most in-demand studio gurus of the age.

“I asked Mike to produce the record, mainly because I was a big UFO fan and I expected him to constantly get me Michael Schenker tones, because I love his guitar sound,” explains Dave. “But Mike said, ‘Look, if Axl calls I’m gonna have to leave. I’m doing his record at the same time as this one’, and I said, ‘No, you’re not!’ and that was the beginning of the end of our relationship. He had a black Labrador puppy which ate a hole through the wall and knocked over my guitar, so we fired him in the middle of the project!”

As the recording sessions neared completion, Dave realised that, having shown Mike the door, he needed someone to come in and assist with the final mixes. Enter Max Norman, master- mind behind Ozzy Osbourne’s first two solo albums, Blizzard Of Ozz and Diary Of A Madman.

“One of the defining moments, when I realised that Max was a genius, was when we had that backwards reverb cymbal hit in between Rust In Peace and Polaris,” says Dave. “I was saying, ‘Y’know what? I want something a little like this [makes whooshing noise]’ and Max said, ‘Like this?’ and there it was! Job done.”

Listening to the immaculate sonic sheen of the album today, it seems almost inconceivable that it was recorded 30 years ago. The combination of Dave, Mike Clink and Max Norman had resulted in an album that raised the bar, both in terms of production values and, of course, musicianship. Songs like Hangar 18, Take No Prisoners and Poison Was The Cure were by no means inaccessible, though. The album offered a bewildering mixture of breathtaking showmanship and giant, instantly memorable hooks. Factor in its striking and iconic Ed Repka cover art and a brilliant, timely album title and Rust In Peace was just about perfect.

“Back then there was a Cold War and the Russians and Americans were pointing nuclear weapons at one another,” snarls Dave. “I saw a bumper sticker that said ‘May all your weapons rust in peace’ and I thought ‘That’s it! That’s the new album title!’ The rest of the guys loved it.”

Released in September 1990, Rust In Peace quickly became Megadeth’s biggest-selling album, peaking at Number 23 in the US album charts and gatecrashing the UK Top 10. It remains a revered classic and is regularly cited as one of the greatest metal albums of all time, not to mention one of the most influential. You can hear its fearless precision in the mutant speed metal of Lamb Of God, the all-out metallic attack of Arch Enemy and even the crushing intricacy of Dream Theater’s heaviest material.

For Dave, even though Megadeth would have even greater commercial triumphs a year or two down the line, Rust In Peace is the record that gets closest to the heart of what the band represents and its status as one of metal’s greatest masterpieces is a source of great pride.

“It really put us on the map,” he concludes. “It was one of those pivotal records and people really started to recognise our playing ability, because when we did Peace Sells and stuff like that, people knew we could play but they didn’t know we could play that good. This was one of those records that helped fuel the prog metal scene too. A lot of people have said that over the years and I used to think, ‘What are you talking about?’ but when I listen to it now I totally get it. Listen to the odd time signatures in Five Magics. I guess we started a lot of that stuff. It’s flattering to me, because I can hear my influence in thrash and speed metal and I guess we influenced some other stuff, too, along the way.”