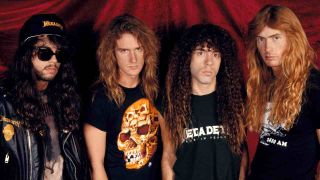 From their cranking up of metal’s technical expectations to the snarling vehemence with which leader Dave Mustaine delivered his confrontational lyrics, Megadeth were already a fearsome force in heavy music with several acclaimed albums under their collective cummerbund when Nick Menza assumed the percussive position in 1989.

What happened next was nothing short of a wholesale update for the entire genre: 1990’s precise and devastating Rust In Peace album redefined how metal should sound, and Menza’s monstrous drumming skills were fundamental to that telling revamp. His significance during Megadeth’s most commercially successful period can hardly be overstated: Menza’s propulsive drumming imbued the band with a sense of power and authority that has influenced several generations of metal musicians to aim for a similarly telling blend of technical skill and musical intelligence.

In truth, without Menza’s pinpoint attack, modern metal sound distinctly different. Drummers are traditionally denied the spotlight, but he was a true metal architect and his untimely death robbed the world of one of its greatest stick-wielding heroes.

After replacing Chuck Behler as Megadeth’s drummer in 1989, Nick Menza immediately stamped his personality and unique playing style on Megadeth’s sound. Rust In Peace remains an undisputed classic, of course, and its towering opening track still has the power to take the breath away. Underpinned by Menza’s brutally precise drumming, Mustaine’s razor-sharp riffing and skewed melodic sensibilities were instantly rendered more potent and startling than ever before. Just listen to that ageless syncopated intro and witness the arrival of a major, groundbreaking talent.

A strong candidate for the prestigious title of ‘Megadeth song most likely to make you bang your head until it comes off’, Take No Prisoners is all about the relationship between Mustaine’s furious riffing and Nick Menza’s ante-upping percussive talents. Switching from irresistible groove and hardcore punk clatter through to bursts of syncopated venom and numerous inspired rolls and fills, Menza is the beating heart of this scabrous eruption of state-of-the-art thrash. It’s hard to imagine another drummer bringing such character and clout to the ’Dethly table.

When this macabre cut from Megadeth’s decade-heralding masterpiece Rust In Peace kicks off, the sheer aggression behind Nick Menza’s drumming still sends a shiver down the spine. That he could navigate his way through Mustaine’s labyrinth of menacing riffs and skewed tempo shifts, veering from flat-out viciousness to exquisite restraint and back again, while somehow exuding his own distinct charisma as a musician, says it all about the drummer’s remarkable abilities.

Although arguably a showcase for the blazing lead skills of Dave Mustaine and Marty Friedman, the ginger tyrant’s six-string foil during the 90s, Tornado Of Souls is another brilliant demonstration of Nick Menza’s intuitive mastery of dynamics and pace. Other drummers might have been tempted to compete with the fret-melting showmanship of his comrades, but Tornado hits as hard as any of Megadeth’s more succinct and brutish anthem, with inspired touches like the immaculate fill that Menza throws in at 2:08 contributing far more to the drive and rush of the song than most of his peers were capable of.

The Countdown To Extinction album was Megadeth’s commercial peak and the beginning of a drift into simpler musical territory that alienated a fair number of fans because it just wasn’t thrash enough. From a broader metal perspective, Countdown is another masterpiece and its opening track is a textbook example of how vital the the chemistry between Mustaine, Friedman, Ellefson and Menza had become. The drummer’s greatest contribution here was, again, the glorious precision of his every tiny fill, emphasis and groove, as he mirrored the angular punch of Mustaine’s riffs and supported the scorching forward charge of one of Megadeth’s catchiest songs with utmost accuracy.

It wasn’t all fire, brimstone and ruined neck muscles during Menza’s tenure with Megadeth. Captive Honour was no curveball but it did represent a more artful and left-of-centre approach for the band, and Menza’s mid-paced groove ensured that the whole thing impacted with the same degree of oomph as any of the album’s more uptempo and bellicose tunes. Neither showy nor obtuse, it’s simply a classic example of how the greatest drummers serve the song first and foremost.

By far the most progressive moment on Countdown, Ashes In Your Mouth is perhaps Nick Menza’s greatest performance of all. He negotiates Mustaine’s oddball time signatures and the song’s sinister ebb and flow with the grace and skill of a master craftsman, chucking in all manner of inspired rhythmical tics and stabs to further embolden the riffs and grooves. Significantly, Menza was granted a writing credit on this song, which rather confirms that his contribution to Megadeth went some way beyond simply keeping the beat.

One of the obvious highlights on an album, Youthanasia, that divided fans but sustained Megadeth’s position as one of metal’s biggest bands, Train Of Consequences is underpinned by a sublime, shuffling, loose-limbed beat from Nick Menza that exhibited another, less vigorously precise side to his drumming. By Megadeth’s standards, it’s an almost funky song that relies entirely on the interplay between Menza’s drums and that jagged, insistent riff. Another brilliant display of restraint and intuition from a drummer that always seemed to know exactly what to play and, more importantly, how to play it.

An underrated gem that can be found on Megadeth’s low-key offcuts collection Hidden Treasures, Breakpoint again features Menza’s name on the writing credits, and it’s his wonderfully fluid and organic attack that makes this more than just another cobwebbed deep cut. There’s a slight hint of jazzy swagger in some of the barreling fills that the drummer employs, but the precision that always defined Menza’s tenure with Megadeth was present and correct too.

Another Menza co-write, Sin is perhaps not the greatest track on 1997’s Cryptic Writings, but the subtle interplay between rhythm section and that monstrous Mustaine/Friedman partnership is self-evident and genuinely thrilling. The thrash may have been largely squeezed out of Megadeth’s arsenal by this point, but thanks to Menza’s gritty gait, the band still sounded harder, tougher and nastier than any of their contemporaries - most of whom, by this point, were flailing around in grunge-dominated, post-Metallica chaos. In 1997, Megadeth still sounded immense.