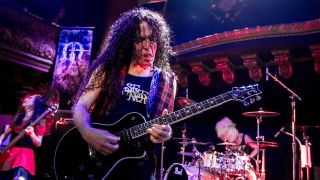 Although he’s widely heralded as one of the world’s most influential shred guitarists, Marty Friedman isn’t all that hot on listening to guitar music. In fact, he can’t even remember the last time he put on an album to savour its six-string goodness.

“I never wanted to get stuck in a box, particularly as a guitarist,” he says. “In my own life and career, I’m playing guitar all the time – I’m hearing a lot of notes – so the last thing I want to do is come home and put on a guitar record. Believe me, I’ve listened to that stuff enough.”

Not that hotshot guitarists are absent from Friedman’s list of the “10 records that changed his life” – the solo star and former Megadeth lead picker cites axe-oriented goodies from Kiss, Black Sabbath and Mahogany Rush among his choices. But he also throws in what many fans might see as surprising left-curves: classic pop from the Beach Boys and the cutting-edge J-pop of Aya Matsuura. “I’ve never drawn a line in the sand when it comes to what music I listen to or get inspired by,” he notes. “It’s pretty simple when you get right down to it: If it’s good, it’s good.”

With the exception of a few examples, the lion’s share of Friedman’s selections stem from his youth. “Adolescence is a very important time when it comes to discovering music,” he points out. “You sit in your room and listen to records, or you go to parties and hang out with friends. Big life moments are usually accompanied by music playing in the background. That sticks with you. You hear a song when you’re older, and your mind rushes back to a point in time.”

With age comes wisdom and, along with it, the ability to analyze why a certain piece of music works or doesn’t. None of which mattered to Friedman as a kid when he was falling in love with his favourites. “Back then, I didn’t know half of what I know now, and it wouldn’t have mattered anyway” he says. “I just knew that something was driving me to listen to a record. I would come rushing home, and I couldn’t wait to put music on. It wasn’t necessary to know why it made me feel a certain way. The only thing that mattered was being in the moment and hearing something that made me happy.”

Below, Friedman runs down the 10 records that changed his life.

“It pretty much changed everything for me. Up until the time I heard this record, I wanted to play sports, which was a little unrealistic. Kiss Alive! fixed that fast – I knew that I had to play the guitar.

“How could anybody listen to this record and not want to play aggressive, loud rock music? The whole thing was so fun and exciting. I annoyed my whole neighbourhood by playing it, and then I annoyed them by playing guitar to it. At the time, it was very important to be able to nail every single lick on the album. My friends felt the same way. It was a really inspirational album.”

“This came out at a time when heavy metal wasn’t in vogue. I was playing a harder version of Kiss and the Ramones at the time, and when I heard Raven I thought it was a whole new thing. It seemed to point a way to a new direction.

“Heavy metal was already becoming a caricature of itself. Even some of the New Wave of British Heavy Metal bands that I was into, they wore thin after a while. People were writing lyrics about goblins and demons and stuff like that – it was a little cheesy. Raven was more realistic in their imagery in a way I could relate to.

“Plus, the music was wild and crazy and fast, with lots of time signature changes and apeshit playing. I thought it was pretty cool that you could do a lot more with heavy metal than play the same old licks, and it was refreshing to hear lyrics than weren’t about ghosts and Satan and shit.”

“Right when I was listening to Kiss a lot, I heard Black Sabbath and I thought, ‘Wow, now that’s heavy!’ Who knew that a guitar could sound so thick and menacing as that? Nothing up to that point sounded quite so dangerous. It was pretty eye-opening for me.

“Like it was with Kiss Alive!, I played this record constantly and tried to cop all of Tony Iommi’s licks. It was a real revelation figuring this stuff out. A lot of the parts were relatively simple, and that made me understand that great music doesn’t have to be tricky or complicated.”

“When you’re an established musician, chances are your influences are pretty much set in stone. The artists who first inspired you made their way into your music, and you just branch off from there. But I got the same feeling from hearing Aya Matsurra as I did when listening to Kiss as a kid. It was like a new beginning for me.

“She has a lot of records that blew my mind, but T.W.O. is sort of like the Kiss Alive! of J-pop, so to speak. It’s not rock‘n’roll or metal or muso music at all – it’s pure pop – but in its own way, it’s completely over the top. The producer, Tsunku, is probably my favourite Japanese record maker. This album is a musical roller coaster. All kinds of things are popping up all the time; it takes wild curves right and left, totally unexpected. Your ears never get tired.

“This record got me very interested in Japanese music, and consequently, I moved to Japan. I recommend the album to anybody who wants to have their mind blown.”

The Ramones are probably my biggest musical influence. I love so many of their records, but Leave Home is the first one I bought. It knocked me right out. I’m a huge fan of anything from the ‘50s, and the Ramones took that sensibility and set it to big, loud distorted guitars. What a brilliant move.

“I learned every Ramones song, which turned out to be a really great thing for me because it built up my stamina. Playing through an entire Ramones album was more of a workout than I got from most other rock albums, so as a result, my endurance level became pretty high. And it’s all downstrokes, too! It’s simple stuff, but it’s so powerful. I can’t think of anything that sounds so good.”

“Here’s something else that inspired me later on in my career. All of Garbage’s albums are fantastic, but their debut had the first and maybe biggest impact on me. As a guitar player, my own style has been pretty well cooked for a while, so it was pretty cool to hear this record and to start re-thinking what I was doing on the instrument.

“The whole existence of the guitar on this record – and all their records – is so creative and beautiful. It seemed to answer a whole set of question that I didn’t even know I was asking. Directly and indirectly, I learned so much about what I needed to do with my own playing.”

“The King. Elvis is my favourite artist of all time, but he’s not really an artist – he’s more like a god figure. You can’t even compare other people to Elvis. He’s almost like the only thing that even matters in music. That’s not too bold a claim, is it?

“I’m a fan of all his work, but I especially love the early stuff, right around when he got signed to Victor. Elvis ’56 is a compilation that’s packed with great hits, and it’s available in a beautifully remastered package. It’s gorgeous to listen to – you feel as if you’re right in the studio listening to him.

“This shows you how much history-making music was made by one guy in just one year. And from a guitar standpoint, Scotty Moore plays on this stuff, and he’s such a genius. He played very tasty, clever, memorable parts that were quite different from most of the run-of-the-mill country licks everybody else was doing.”

“Another hugely influential artist. Misora Hibari is probably the most famous singer in the history of Japan. Her voice is one of the things that I try mimic when I play guitar. If there’s a God, Misora’s voice passes through Him and the heavens and reaches us through her.

“The second you hear her, it hits you in such a profound way. You just sit there and go, ‘I didn’t know anything could be so gorgeous.’ I always thought that I would love for somebody to say something like that about my guitar playing. So the obvious thing was to try to emulate her vocal approach as best as I could. I’ve done that for many, many years.”

“Let’s go back into guitar mode. When I was a kid, I liked rock‘n’roll like Kiss. A lot of the other guitarists were into the blues, but I just couldn’t go there. The bluesy thing didn’t find a place in my experience. Maybe I was too young.

“But then I heard Frank Marino and Mahogany Rush, and I got it. I realized that blues playing could be just as exciting as any of the aggressive rock bands I liked. Guitar music just flowed out of him so naturally; he wasn’t putting up any kind of front at all. In his own way, he breathed a lot of life into a tired genre.

“A lot of the other blues stuff went over my head. Maybe I was just a typical kid from the suburbs – I didn’t have the blues. Frank presented the style to me in a very fresh and energetic way that I could relate to.”

“If you learn all the Beach Boys songs, you’ll get everything you need to know about chord structure and harmony. The most genius thing is write something very complex that sounds totally simple and easy to listen to. Brian Wilson was the king of that. The music sounds effortless, but you know that creating it was anything but painless.

“If you think about some of the songs of the time, something like Don’t Worry Baby stands out – what an interesting melody! There are so many twists on simple chord changes, and you think, ‘How come nobody else thought of this?’ The Beach Boys even did choruses that weren’t in the same key as the verses, yet they didn’t sound out of place. Really, this is some of the finest songwriting of all time.”