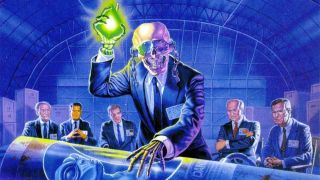 We look back into the ghoulish past of Megadeth’s skull-faced mascot Vic Rattlehead, from the early crude drawings in the mid-80s to the CGI album covers of the 21st century.

In this graphic vision of occult torture – Dave Mustaine’s take on the ‘hear no evil, see no evil, speak no evil’ principle – Vic Rattlehead was born. Skull Beneath The Skin was one of the first Megadeth songs, originally appearing on their earliest release, the 1984 Last Rites demo. That tape’s inlay depicted an embryonic, cartoonish iteration of the character, an original design by Dave Mustaine.

After Megadeth signed to Combat Records, Mustaine’s artwork got lost, so the label mounted their own photographic rendering of the creature, based on the frontman’s descriptions. When the band’s debut album Killing Is My Business… And Business Is Good! came out in 1985, the wider world’s first glimpse of this now-iconic mascot was as a photo of a cheap Halloween decoration dumped on some chains between a knife and a candle. The band were not happy.

A 2002 CD reissue utilised a more professional redesign of Mustaine’s original ‘Vic and crossbones’ doodle, but Vic’s features and character were properly nailed and immortalised in 1986 by Ed Repka, in one of his first – and best – record sleeves. Peace Sells… But Who’s Buying? gave us a full-bodied Vic Rattlehead as a post-apocalyptic estate agent, gloatingly flogging us the ruins of the United Nations building.

Our next sighting of Vic is through a malfunctioning TV set on the sleeve of 1988’s So Far, So Good… So What!. He seems to have given up real estate and become a thermonuclear warrior on the moon, bedecked with bulletbelts and wielding a rifle like it’s a guitar. Simultaneously ludicrous and spooky, the end result brings to mind a heavy metal Tusken Raider.

Vic was back on Earth – and apparently wearing a dinner jacket – for the moonlit graveyard vista of the same year’s Mary Jane single, where he’s spotted indecently mounting the tomb of the titular witch.

He was mutated to giant size on the sleeve of 1989 single No More Mr Nice Guy, an Alice Cooper cover from the soundtrack of poorly-received Wes Craven movie Shocker. An overlooked Repka classic blending queasy purples and greens, the massive Rattlehead hauling himself out of a lagoon of radioactive waste is surely a defining image of ‘80s thrash.

For the next album sleeve in Hangar 18, where Vic reveals the body of a pissed-off alien to assembled world leaders, holding aloft a pulsing green gem. It is undoubtedly one of the most recognisable and striking metal sleeves of all time, but there’s a spooky mystery at its heart. The man on the left is widely said to be British Prime Minister John Major. However, not only does it look nothing like him, but when Rust In Peace came out in September 1990 the PM was Margaret Thatcher! So who is he?

By the time Vic enters the ‘90s on the Hangar 18 single sleeve, he’s become a white-coated scientist, protectively cradling a human foetus in a jar of formaldehyde, apparently in the process of splicing its DNA with the lumbering monster from space suspended behind him.

On 1991’s Rusted Pieces video cover Vic holds aloft the world on a pile of skulls, his smart suit in tatters.

It’s surely a stronger image than the less-than-subtle image of a woman hanging babies on a washing line that featured on the front cover, yet Vic also stayed on the flip-side for Youthanasia, clad in a Grim Reaper robe cradling a newborn infant – perhaps a parody of the ‘80s ‘Man And Baby’ Athena poster.

We had to wait until 2001 for Mr Rattlehead to re-emerge – literally, Alien-style, out of the chest of Mustaine himself – on the cover of The World Needs A Hero. It’s a nice concept, somewhat compromised by the blurry, anaemic Photoshop rendering.

Much better was the cover of The System Has Failed in 2004, where Vic’s back in his blue suit hobnobbing with the political elite once more, handing out $100 bills in return for not guilty verdicts in front of an abandoned Supreme Court building.

Next he was on fire hugging a bomb for 2006’s DVD treasure trove Arsenal Of Megadeth.

Which was simple but effective, especially when compared to 2007’s United Abominations sleeve. For this album, the band outsourced the artwork to a fan competition, and for some reason this was Mustaine’s favourite entry. Vic Rattlehead now appears to be an actual man, flashing his pectorals with an angel sidekick as a load of flying oil barrels destroy the UN building in this cluttered, overstated and amateurish tableau.

A simpler, more effective exploration of the ‘Vic as a real man’ motif graced the cover of 2011 single Public Enemy No. 1, where we get to see the skin behind the skull – and it’s a 1930s hoodlum mugshot.

For 2011’s Thirteen album cover, we got to see Vic from the rear for the first time, as he stalks a corridor scrawled with the number 13. It’s a more subtle and sinister concept than we’d seen for some time on a Megadeth sleeve, especially the faint hieroglyphics across the bottom denoting images from the previous twelve album sleeves.

By far the subtlest apparition was just about visible on the sleeve of 2013’s Super Collider. At first glance, it’s simply a photograph of the Large Hadron Collider. It takes some advanced staring, ideally at the twelve-inch vinyl sleeve, before the ghostly profile of Vic Rattlehead resolves itself in your cortex.

No such optical effort is required to spot the Rattlehead adorning Megadeth’s latest album Dystopia; he’s dead centre, with a sword casually slung over his shoulder and the Statue Of Liberty’s head in his hand. Now – at last – our Vic is a cybernetically enhanced vigilante prowling a dystopian future world, like his spiritual forebear Eddie on the Somewhere In Time sleeve. They’ve even used the same font for the title! Vic pensively surveys the grim scene, perhaps wondering, like us, where he’ll end up next…