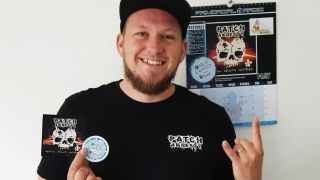 York postal worker and metal fan Michael Lacy has raised more than £10,000 for mental health charity MIND by selling rock and metal patches that have been donated to his charity drive Patch Amnesty.

Big-hearted rock and metal fans have been sending Michael patches from all over the world from their much-loved jackets. And with Michael passing the £10,000 milestone, we caught up with him to find out more about Patch Amnesty, his inspiration behind the campaign – and who his favourite band is.

When did you first get the idea to start collecting patches to sell to raise money for MIND?

“It was in March 2019. I'd been at an event the previous year in which lots of people were wearing their battle jackets and I thought they were all so incredible and individual to each person. Me and another guy decided that we would both make a start on our own and bring them to the event the following year.

“Having put my own jacket together I had a few spare patches left over so I decided to hit up the socials asking if others had spare patches for me to sell in aid of charity.

“Within a month I'd had over 300 patches donated and the event was such a success that I'd decided to set up properly and see where it could go. Fast forward to today and we've raised £10,640.

"I decided on MIND as the charity I wanted to fundraise for as I had recently been diagnosed with my own mental health issues and was on a personal journey to learn more about both mine and mental health in general.

"Raising awareness has become just as important to me as raising funds for mental health."

So how many patches have you collected so far?

“At this moment in time, I currently have around 1800 patches. Since starting, we have easily had more than 3500 patches donated from all over the world. Most of these stay in my patch amnesty suitcase which I take along to events. But some of the more rare, vintage patches go up on our eBay page.

“I’ve also been able to produce my own patches through separate funding which enables me to maximise the money we raise for charity.”

What’s the most one of the patches has sold for since you started?

“I’ve had some amazing patches donated, but without question Iron Maiden patches fetch the most. I recently had a Maiden strip patch donated that sold for £205. I’ve also had a couple of others that have been snapped up for over £100."

You clearly have a passion for music and patches. Who are your favourite bands and have you reached out to any of them about donating?

“Being 33 makes me a late 90s early 2000 kid, so it won't surprise you when I say my favourite band is Linkin Park. Since starting I have gained a genuine interest in patches and have spent a fair bit on my own personal collection which consists of bands from that era.

“I haven’t reached out to any of these bands as other than posting on their socials – I wouldn't know where to start!

“I’ve had many bands send in patches though. In the very beginning I had Ginger Wildheart send some patches in along with the likes of Death Blooms, Ward 13 and Mortishead to name a few."

Are there any patches in particular you’re on the lookout for? Rare patches, cool designs etc.

“Obviously the rarer patches from the 70s and 80s are what raise the most for the cause, but we take any thing really. If you can sew it we take it!

“I’ve got everything from Iron Maiden to Iron Man. From Pantera to My Little Pony! We have film, cartoon, football and any thing else you can think of. I remember at one event we had a guy buying his daughter patches for her first jacket and as well as adding to his own. The variety is what makes it for me."

Finally, how can the rock and metal community help Patch Amnesty?

“I appreciate patches and jackets hold so much sentimental value and so many memories, but if they are collecting dust in the loft then know that they can help raise vital funds for mental health in a time when they need it more than ever.

“The rock and metal community have been so supportive since the very beginning. I’ve had many events cancelled this year but hope to get them all rebooked for next year so please keep an eye out.”