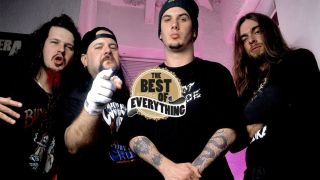 The first time I ever heard Pantera was when my cousin played me ‘Primal Concrete Sledge’ from ‘Cowboys From Hell’. I was about 11 or 12 years old at the time, and had gotten into Slayer and Sepultura by then, but I had never heard anything like this. It got me completely hooked on the band.

The only time I saw them was when I was 14, and they made such a huge impression. They blew me away. I remember being scared going down to the front during that gig, but equally it was just so exciting. Pantera are one of my favourite bands and such a big influence on King Parrot.

The first time I heard from Phil Anselmo was by email. I thought someone was winding me up, but we exchanged emails and I soon realised it was actually him contacting me. We met up a couple of years ago when Down played at the Soundwave Festival, and we hung out a lot. He’s just an awesome guy, and has a knowledge of obscure extreme metal bands that’s incredible. He knows so much more about the Aussie scene than I do!

Once I got beyond the fact that he’s fucking Phil Anselmo, he was so helpful as a producer [on King Parrot’s latest album Dead Set]. Whenever I had a problem with a vocal phrasing, he always had a great suggestion for the way to get around it. He made things so easy in the studio. He’s a hero who’s become a friend…

SLAUGHTERED (Far Beyond Driven, 1994)
For me, this was the track which jumped out on this album. It’s a little different to the traditional Pantera sound, but it did prove they’d lost none of their extreme edge, and the riff is so tough.

SUICIDE NOTE, PT. 2 (The Great Southern Trendkill, 1996)
I love the way this song drives along. It has an awesome drum sound from Vinnie Paul, some of the vocals are simply overpowering. There’s no loss of that Pantera power.

STRENGTH BEYOND STRENGTH (Far Beyond Driven, 1994)
What a great way to open up this album. Pantera showed they were as aggressive as ever. It’s super catchy and fucking hits you hard. The sound is really tight and when I first heard it, I just went “Holy fucking shit!”.

THE GREAT SOUTHERN TRENDKILL (The Great Southern Trendkill, 1996)
I did wonder how the band could possibly follow Far Beyond Driven. But this song made a huge statement of how good the band still were. It made me lose my mind to it. The band were still going over the edge.

FUCKING HOSTILE (Vulgar Display Of Power, 1992)
It speaks for itself, doesn’t it? It’s been covered by so many bands, because it is a metal classic. This is one of the earliest songs I ever heard from Pantera. I love what it says and how it’s delivered.

MOUTH FOR WAR (Vulgar Display Of Power, 1992)
The riff at the start is a killer, and this showcases the band’s groove so well. You can hear how they delivered this sort of groove like nobody else. No wonder it’s become a huge favourite with fans.

A NEW LEVEL (Vulgar Display Of Power, 1992)
I still recall seeing them play this live on the only occasion I ever saw Pantera. What it proved was that you could play slow without losing any intensity. It’s just so fucking heavy and packs a massive punch.

Listen to the songs on our Spotify playlist: The 10 heaviest songs by Pantera