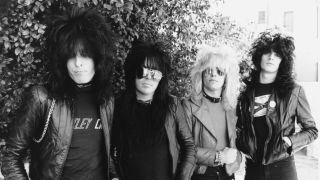 Time to dust off the spandex, tuck your largest cucumber inside and raid the nearest Claire’s Accessories... 'cause here’s our Bluffer’s Guide to the fluffiest metal sub-genre there ever was!

There are a few bands that could be credited for recording what would eventually become ground zero for glam metal – from The Sweet to The New York Dolls – but when it comes to lasting impact, Kiss stand head and shoulders above the rest. Their 1974 debut is a masterclass in celebratory, no-nonsense rock ’n’ roll and still sounds absolutely fucking killer four decades on.

Only a few years later, a new name began to spread like wildfire through the Hollywood music scene with reports of a singer that literally flew through the air and a guitar player that rivalled the world’s greatest. Kiss Firebreather-In-Chief Gene Simmons was so impressed by Van Halen that he offered to produce their demo (he also tried convincing them to change their name to Daddy Longlegs and failed, thankfully). By the mid-80s, Van Halen were taking their flamboyant anthems to the world’s biggest arenas.

Hanoi Rocks – I Want You

(Taken from Self Destruction Blues, 1982)

Finnish legends Hanoi Rocks were not only hugely influential to the sound of the bands that would later dominate LA’s Sunset Strip, but also the aesthetic. The backcombed, peroxide mane of Michael Monroe would become almost mandatory for any hair metal frontman by the decade’s end. The band also brought a more punk rock influence to the glam sound, owing as much to The New York Dolls as they did early Aerosmith.

While their first two albums explored more straight-up, AC/DC-esque sonic heaviness, Pyromania saw Sheffield’s finest evolve towards a more radio-friendly and pop-driven sounds. And it clearly was the right move… by the end of the 80s, they were one of the UK’s most successful bands.

With roots stemming all the back to the early 70s, it certainly took Twisted Sister a while to find their feet. But all hell broke loose when they unleashed third album Stay Hungry, heightened by the MTV frenzy surrounding their ridiculous yet hugely entertaining videos for We’re Not Gonna Take It and I Wanna Rock, as well as a cameo in hit film Pee-Wee’s Big Adventure (seriously!). Though they considered themselves to be a heavy metal band and distanced themselves from the glam scene, you’d be hard-pressed to find a more outspoken, PMRC-bothering and generally shit-scary frontman than cross-dresser extraordinaire Dee Snider.

If there was one song that truly encapsulated the decadent spirit of the 80s… it was this. The lyrics namecheck various strip clubs around the world and three guesses what kind of venue was chosen for the album launch and video shoot? Yup. And there’s no doubt they meant every single word of it. Frontman Vince Neil has even opened several of his own Girls, Girls, Girls strip clubs. Wahey!

(Taken from Appetite For Destruction, 1987)

When Guns N’ Roses exploded onto the Sunset Strip, they were a breath of fresh air. The scene was starting to get predictable, but this bunch of misfits took rock ’n’ roll to its highest peaks with their finely crafted yet visceral cocktail of punk and glam. At this point of their career they were the most dangerous band in the world. Now… not so much.

Poison – Nothin’ But A Good Time

When record labels realised how much money there was money to be made in selling the broken dreams on the streets of LA, there was an inevitable clamour around hairspray-lovin’, drug-addled blokes in guyliner in leopard print spandex singing about having the time of their lives. Poison were, believe it or not, one of the earlier and better ones.

By this point the barrel was being well and truly scraped, just as grunge and alternative rock rang the death knell for all of the Sunset Strip’s washed-up and coke-bloated wasters. Gone were the pointy fluorescent guitars and songs about feasting upon life’s excesses – making way for plaid shirts, heroin and misery. That didn’t stop Warrant from sneaking in a few Top 10 singles, though sadly their efforts failed to chart from ‘92 onwards.

Steel Panther – Death To All But Metal

If there’s one band flying the flag for glam in today’s music scene, it’s Steel Panther – albeit based around their tongue-in-cheek nostalgia for the hedonistic debauchery of their musical forefathers. They plagiarised and parodied their way into pretty much becoming the Sunset Strip’s very own house band, but more importantly with the chops to actually pull it off. Are they a joke? Is it really that offensive? Who cares, either way Steel Panther fucking rule.

Check out our other Bluffer’s Guides to black metal and death metal.