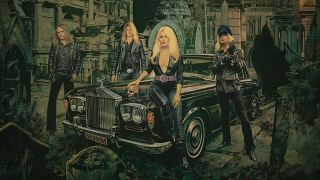 With their third offering, released last week, the nostalgia-driven occultists Lucifer have seemingly found their niche.

Uniting the doom-laden debut featuring the graveyard guitar tones of ex-Cathedral man Gaz Jennings and the retro rock of their sophomore that brought in the talents of multi-instrumentalist Nicke Andersson of Entombed and The Hellacopters fame, songstress Johanna Sadonis has found the perfect balance of light and dark with Lucifer III.

I had something like Motown meets Lynyrd Skynyrd in mind for the rhythm but it’s probably not discernible. Johanna’s lyrics are about the loss of someone dear to you that will never return and not really coming to terms with it. Holding on to the ghost kind of.

This one started off with a death metal type riff I had and I thought it paired up quite nicely with the more meat and potatoes kind of chord progressions of the rest of the song. I was wondering how you could come up with a vocal melody to that riff but Johanna delivered as usual.

If you’re into trivia, how many animals can you hear in this one? This is also the first Lucifer song to feature the Harpsichord. Probably not the last. We’re trying to find out if there’s a Keytarr version of the Harpsichord so we can use it live. It would look very smart on our guitar player Linus.

We had a sketch of this one around the time we recorded Lucifer II already but I guess we couldn’t seem to put the finishing touch on it so it stayed in the drawer until this album.

The working title was “Alfred” from a lonely heron bird that hung around Johanna’s old apartment in Berlin at the time. We christened him Alfred but he changed his name to Leather Demon.

I guess it was about time to have a song that bear the band’s name and I’m glad Johanna wrote it. Someone said “it isn’t exactly Iron Maiden or Black Sabbath is it?” Of course it isn’t, it’s Lucifer. I did my best Kerslake/Ward imitation on this one.

A good shuffle has never been my forte but sometimes I impress myself. I stole the chord progression in the chorus from the end of a song off the Alice Cooper Show live album. I guess I shouldn’t use the word “stole”.

Let’s just say I tip my hat to things I like from time to time. I don’t remember which song but I always thought that particular ending was very beautiful. Trivia time again.

There’s quite a bit of hat tipping to a certain group from Long Island in this song. Not only in this song and to my ears not very subtle but I don’t care. I love them. Thank you for the music. For whatever reason this songs seem to stick out a bit from the rest of the songs on the album but I can’t put my finger on it.

This one’s also from when we wrote songs for Lucifer II. Johanna found it in the drawer and finished it. It’s about being buried alive no less. Martin does an oriental sounding guitar solo on this one.

I had my doubts since I’m usually not a huge fan of oriental scales in rock music. Let’s just say I prefer Frehley over Blackmore. No offence. It took some convincing but now I like it. Even I can be wrong sometimes.

I always thought Deep Purple were more my cup of tea than Rainbow, but in later years I’ve come to appreciate them quite a bit. When they don’t get too oriental or dungeons and dragons that is. Again, no offence. Johanna and Martin are big fans.

My favourite Rainbow song is Starstruck and that inspired the main riff to this one. No one in the band picked up on that though which I guess is a good thing. If the tipping of the hat gets too obvious you might get accused of theft.

A guy said the intro to this song sounded exactly like a song by Rush so we had to look it up. It did. Thing is, neither Johanna or me had ever heard that Rush song. I don’t remember what the song is called now but there you go. Alan Forbes, who designed the Lucifer logo, most likely owns a copy of their debut though.

I came up the verse and chorus riffs while trying out the new studio Honk Palace that’s housed in a small cottage on our property. I showed it to Johanna and she immediately had ideas for both melodies and lyrics and got to work. I added a middle eight riff and it was done. It felt like this one had to close the album.

Lucifer III is out now via Century Media