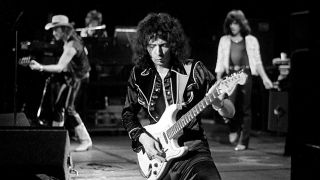 In the following excerpt from the new book, Greg Prato’s The Other Side of Rainbow, former Rainbow members - and other renowned admirers of the band - take a look back on what is considered to be the band’s “MTV era,” which featured Joe Lynn Turner on vocals, and spawned such albums as Difficult to Cure, Straight Between the Eyes and Bent Out of Shape (and the hits I Surrender, Stone Cold and Street of Dreams).

Doogie White [Rainbow singer (1994-1997)]: Rainbow was about Ritchie’s guitar. And it was about the riffs. And it was about the solos. And those songs didn’t have that - with the exception of things like Eyes of Fire. Can’t Let You Go was a great song, Jealous Lover was a great song because it had that brilliant picked riff - magic stuff like that. But when it started to go into Street of Dreams and all that, that “fodder for the masses,” that’s when I didn’t like it, because it wasn’t showing Ritchie. Any band could have done that. And it wasn’t what I wanted as a Ritchie Blackmore fan. But that was Ritchie’s choice to do that, and Joe takes a lot of flak for that. And they were very lightly mixed, as well - it was very keyboard-y. And not Hammond and not Moog - stringy sounds were being experimented in rock music.

Europe were doing it and Bon Jovi were doing it. And Rainbow were never Bon Jovi or Europe - they were a much more aggressive and bigger source than that. But for whatever reason anybody else has told you for what it is, it comes down to you need to make money and sell records to be successful. And if that’s the path you have to go to do it, then that’s the road you have to go. I don’t know whether it was an “artist integrity” thing or not. But it never gelled for me. It still had the fire live, because Ritchie’s guitar could still come out in the mix, so the songs were much more powerful live - in the same way that Made in Japan is a far more exciting album than Machine Head is. Ritchie’s live performances with Rainbow during the Joe Lynn Turner period were much more exciting than the albums were, because the albums were very flat. There was no real peaks and troughs in it - it certainly did nothing for me.

It brought plenty of girls in, and they’re half the world population and half the record buying public, so that may have been the thing. For us rockers, we forgave Graham his short hair and his white jackets and his ties - because he sang as if he really meant it. But we didn’t forgive the latter version of Rainbow, because it didn’t tap into the rock’n’roll soul and spirit that we wanted. We were prepared to follow it in the same way that people were prepared to follow Bowie through all his incarnations - some you liked and some you didn’t like. But for me, it wasn’t a satisfying return for the emotional expense that I put into the band. And that’s why when I went with Ritchie, and Ritchie asked me what kind of an album I wanted to do, I told him I wanted to do a cross between Burn and Rainbow Rising. Burn because Burn sounded amazing and was the first album I ever heard him play on, and Rainbow Rising because it was the greatest - and remains the greatest - Rainbow album of all-time.

David Rosenthal [Rainbow keyboardist (1981-1984)]: We were all on the same page in terms of on the rise in conjunction with this brand new thing called MTV, that also broke the Scorpions wide open.

Herman Rarebell [Former Scorpions drummer (toured with Rainbow in 1979, 1980, & 1982)]: Without MTV, none of those bands would have made it. It was the most important thing to all of those bands. Without MTV, we would have never been that big in America - Rainbow, AC/DC, all those bands. Now, you look at MTV, and they don’t play any rock anymore. It changed completely. But in those days, in the ‘80s, that’s all you heard on MTV - rock, rock, rock. “Money for nothing and the chicks for free” - when I heard that song [Dire Straits’ Money for Nothing], I couldn’t believe it. I said, “What a fantastic idea!” It was perfect.

Joe LynnTurner [Rainbow singer (1980-1984)]: Video was new back then. Really new. Nobody knew what to do or how to look or anything. MTV was brand new, and we were just finding our way. And because Blackmore was never one for…not showing off, but he was always secluded - this was a new idiom for him. So he was all for it, and we were all for it, but again, we were just “finding our legs,” so to speak. We were just trying to see what this was about. I look back at the videos and they’re quite simple and mimicking the lyric and all that, and trying to lip-synch.

It was an exciting era, because this obviously became huge - MTV became huge. For example, for the Can’t Happen Here video, we won a gold medal, because it was animation interspersed and edited with live cuts of the band. We were on tour and didn’t want to take the time out to do this. It was never really that important - awards, as evidenced by this Hall of Fame stuff. We were never into awards. At least that part of Rainbow was never into it - we thought that was too “celebrity,” and we were a rock band. We had credibility. And I still feel that way - that there are celebrities, and then there’s artists.

David Rosenthal: We were a big part of right when MTV was getting started. Nobody could have predicted that, because it was a brand new thing, so nobody really knew at that time what MTV was or the impact it was going to have on the music business. But certainly, that song [Stone Cold] and the band’s success was largely boosted by MTV.

Joe Lynn Turner: Again, we didn’t know much about videos [concerning the filming of the Stone Cold video]. I’m walking around with google eyes, in a leather jacket, putting up the collar, and walking around in these mirrors. We didn’t know what we were doing. I do remember when we were writing for Death Alley Driver, singing about the graveyard and stuff, and then we got banned on that one, because we were in a graveyard! It was really weird for the time, because Skid Row did that high noon thing, and they murder each other. And I thought, “Well, murder is OK…but standing in a graveyard is not OK?” Then I realised there was money involved and politics and all these other things - that’s a whole other book. But I remember Stone Cold, trying to capture that feeling. I got both good and bad comments from the video. But it did what it did for us, so, no harm done.

David Rosenthal: I was really surprised that we didn’t get to play live. It’s all mimed. That was a little bit of a shock to me the first time I did it. For obvious reasons, they don’t do that - you just play along to the record.

Joe Lynn Turner: We didn’t have time to record the video [for Street of Dreams]. We were a touring band, and we loved it. These videos were getting in our way…and we knew we needed a video, because that’s what you had to do. That was required - it was even in the contract. So we were like, “Alright, we’ve got to do a video,” and we put it off long enough. We were in a basement someplace, walking around, and Hipgnosis said, “Look, don’t worry about it. We’ll take care of the rest.” The first time I actually saw the video - with the hypnotist and this whole dreamlike state and everything - was on MTV! [Laughs] I don’t even think I saw it before it came out.

We were all cool with it, because we felt that video was something else that we didn’t know much about - other than that the Death Alley Driver video was something that I wrote because of the lyrics, and I said, “Ritchie’s in the black car, I’m on the bike, and this and that.” That was the basic structure of it. But Street of Dreams, we had no structure at all. Hipgnosis put that together, and they edited together us roaming around in this basement, and that as it.

We weren’t a video band - we didn’t pose. We weren’t posers. The operative word was “poser” - that’s an English word. It meant you were not really a rock’n’roll artist, you were sort of self-inflated and enjoying your famous credibility, all this crap. We were against that - posing and trying to be stars. We dug the music and we prided ourselves on that. So we spent one afternoon walking around this basement - I had on a ripped sweatshirt. No attire or anything. Nothing like all these clothes that these video stars had. We were simple, stripped down, basic. But the song spoke for itself. It’s still a huge song.

David Rosenthal: We were only in it for a little bit. I remember Ritchie didn’t want to be in that video - for whatever reasons he had. So we shot a few scenes with the band playing in that factory/warehouse setting. Since he was only in it a little bit, everybody else was only in it a little bit! But we also did a video for Can’t Let You Go, and that was sort of a role-playing thing - that was a thing that Ritchie got involved with. But for some reason, with Street of Dreams, he just wanted to make his brief cameo in the solo, and that was it.

Craig Goldy [Dio guitarist, Dio Disciples guitarist]: I was happy for them. I wouldn’t go as far to agree that they became “an MTV band,” it’s I think rock fans are brutal - they’re like sports fans. They don’t see the strategy behind things that they do. And they have to go hand-in-hand with the business. But when those videos came on, I was really proud of them. It was like, “Finally, the guys that I love are now in the mainstream.” Because up to that point, it always frustrated me that mainstream never welcomed the obscure. And so this man - this obscure/brilliant man - finally managed to get himself into the mainstream.

Joe Lynn Turner: Now of course, videos have turned into something different. But it was an exciting time and a time of transition and a time of change. And we were on top of that.

The Other Side Of Rainbow is out now.

Quiz: Do you know your Classic Rock fact from fiction?