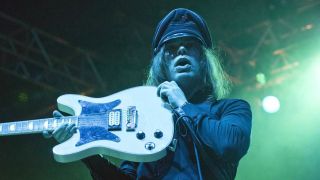 The singer and guitarist woke up at the weekend unable to hear from his right ear and was told by doctors he had developed a condition known as ‘sudden deafness.’

He’s been unable to perform on the band’s European tour dates since and is undergoing tests to pinpoint the problem. The group have been performing as a three-piece in the meantime.

Andersson says: “Not being able to hear the one thing I truly love, music, is both scary and depressing. Your support means a lot to me. I’ve gotten some of my hearing back, for which I’m very grateful.

“However, I need to see a specialist tomorrow morning to get a final opinion on whether I can start playing again or if I have to continue treatment and rehabilitation in order to regain my hearing. I’ll let you know as soon as I know.”

Andersson was a founding member of Swedish garage rockers The Hellacopters, who this month announced they’ll be reforming for an appearance at next year’s Sweden Rock Festival.