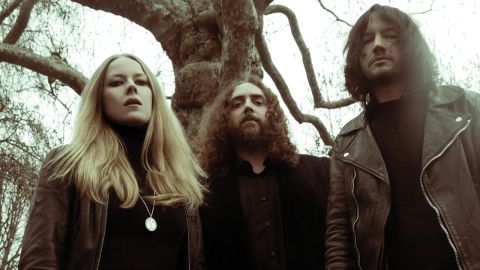 Lucifer’s debut album sees them going beyond the Sabbath-worship of the recent Anubis single to explore a more classic approach of atmospheric, 70s-tinged proto-metal.

Former The Oath vocalist Johanna Sadonis and Cathedral axeman Gaz Jennings are a pact made in Hades, the pair striving to craft something more poignant than the numerous female-fronted occult rock bands currently at large.

Straight from the opening strains of Abracadabra, Gaz’s trademark proto-metal riffs are superbly complemented by strong lilting vocals that effortlessly intone above, and songs flow rather than bounce along.

Lucifer focus more on creating moody sentiment and depth rather than an all-out assault as swelling tempos shift together dexterously to form a more classic, mature sound. The slower moments on tracks such as the appropriately named Sabbath or the lengthy White Mountain prove to be the most monolithic and satisfactory and offer up some sublime twin-lead guitar flourishes with some solid drum fills to pin down the cosmic nod.

At a time when countless bands are attempting to plunder the glory days of prog rock and heavy 70s swagger, Lucifer come out on top offering a more genuine and subtle approach that still packs a punch./o:p