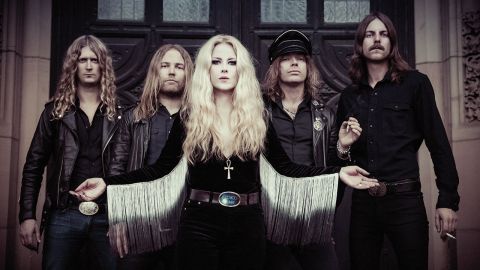 Until now Lucifer’s history has been a tale in two parts: the doom-laden debut featuring the graveyard guitar tones of ex-Cathedral man Gaz Jennings and the retro rock sophomore that brought in the talents of multi-instrumentalist Nicke Andersson of Entombed and The Hellacopters fame.

Ironically, for a band whose driving force is undeniably the persuasive mystical guile of occult enchantress Johanna Sadonis, Lucifer’s other alumni have inadvertently snatched the headlines and sliced fans of the band into two camps: those who dug the heavy menace of the early stuff and those who perceived Lucifer II as the more accessible, brighter album.

Fast-forward to 2020 and with Nicke Andersson still involved, Lucifer III steers the listener towards familiar ground, bringing plenty of upbeat occult rock with its feet planted firmly in the 70s.

You can almost see Johanna, the enchanting vocalist of the underworld, banging a tambourine against her leather-clad hip in time to Nicke’s drumbeat on Ghosts.

Grooving like the Swedish band with a very similar name, the track also reveals a new clarity to Johanna’s rich, vibrato vocals, which resonate with the straight rocking and psychedelic undertones in new and confident ways.

Lucifer have established a formula, but not enough to make Lucifer III dull or predictable. On guitars, Martin Nordin and Linus Björklund pepper the compelling songwriting with dark and doomy tones that hark back to the debut.

You can hear this on the film noir ballad Leather Demon and on ode-to-Black-Sabbath Coffin Fever while Midnight Phantom playfully injects a little horror into the mix.

Three albums in, Lucifer III is the sound of the band still experimenting in search of the right balance of light(bringing) and infernally licentious shade, but ultimately, as with all their records, it’s Johanna Sadonis’s natural allure and an authentic rendering of past sounds that makes Lucifer a success.

Lucifer III is out now via Century Media