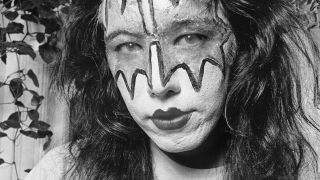 With his intergalactic face-paint and rocket-launching Les Paul, Ace Frehley’s ‘Spaceman’ stage persona of the 70s suggested a man who had fallen to earth. The truth was more prosaic. Paul Daniel Frehley was born in April 1951 in the notorious Bronx district of New York, but escaped a life of crime and menial labour when, in 1972, he spotted a small-ad in the Village Voice – ‘Lead guitarist wanted with flash and ability’– and joined Gene Simmons, Paul Stanley and Peter Criss in Kiss. By 1982 he’d left the Kiss line-up in a narcotic haze. Today he’s sober, promoting a new Gibson Les Paul signature model, and has, as the title of his recent autobiography says, no regrets.

Do you think you’re ageing well?

Yeah. I think the fact I don’t drink any more helps a lot. After a while, in your 50s and 60s, drinking really ages you. I miss the insanity of it, and some of the crazy situations, but I still have fun today, it’s just controlled mayhem. The more I abused alcohol and drugs, the more blackouts I had. So those areas of my book were hardest to write. Probably the biggest black spot was after I left Kiss, so my friends, family and the people who were around at the time had to jog my memory.

What regrets do you have?

None, really. I probably wasn’t a good role model, because my career got in the way of my family life and it’s hard to do both well. That’s not a regret, though, because if I hadn’t chosen my career I wouldn’t be where I am today. You can’t change the past.

Wasn’t it a bit harsh to reveal in your book that Gene had pubic lice?

Well, we all had them, but it originated with Gene. Actually, most people who know Gene have said I went pretty easy on him. I sent him a copy for Christmas but I haven’t gotten any feedback yet. Gene’s heart is in the right place a lot of times, and on a personal level we get along fine, but he makes business decisions I don’t agree with and that’s when we run into problems. We had lunch a few months back and just reminisced about old times. But Gene likes to hear himself talk, y’know? He talks about three people: me, myself and I. You have an IQ of 163. How come you’ve done so many stupid things? That’s where addiction comes in. Kiss once took an IQ test, and I was on top. I guess my brain was working good that morning – thank God for good genes. I think Paul got the lowest score. No, that didn’t surprise me. A frontman doesn’t have to be a genius, he just has to have the right moves. But with an IQ test, there are people who are brilliant that would probably do real shitty on them. I mean, Gene has the best business brain, absolutely. I don’t consider myself a very good businessman. When I start doing numbers I get a headache. I’m ruled by the creative side of my brain, not the analytical side.

I was kind of a prankster. I’d get into trouble. But I also excelled in sports. I was a really popular kid. I was a man’s man and a ladies’ man. I was always interested in art, and for a while I thought I was gonna be a commercial graphic artist, but music kinda stole that away from me.

How rough did things get in your street gangs in the 60s?

It was crazy. I got arrested several times. I had guns put to my head. I got into some crazy fights. I got into some predicaments where I wasn’t sure I was gonna get out of them. ButI was lucky. The worst thing that ever happened was when I was stabbed in the stomach on my thirteenth birthday. Luckily it wasn’t a deep wound.

What happened to your wrist last year that forced you to cancel your appearance at Hard Rock Hell?

I fell on the marble floor of my bathroom and hit it pretty hard. I couldn’t play guitar for a while because I had a cast on.

How did you react when you heard about your death hoax in 2007?

I laughed. I thought it was kinda ridiculous. We never found out exactly where that rumour started. You have to take everything you read on the internet with a grain of salt.

Do you agree with Mayan predictions that the world will end in 2012?

It’s possible. There’s all sorts of things going on. The sun has an 11-year cycle and it’s coming towards an end, so they’re expecting more sun-spot activity, solar winds and solar flares that could affect computers and power grids. Some planets are aligning, from what I understand, so that could cause an earthquake and severe weather. So a lot of crazy of things could happen. It doesn’t scare me. If I died tomorrow I’d die happy, because I’ve lived 10 lifetimes over what a regular person might have experienced. I’d probably spend my last few minutes thinking about where I’m headed next – up or down. I think I’m a good guy, so I think I’m gonna go to a better place.

What do you think is the most laughable item of Kiss merchandise?

I guess maybe the Kiss toilet paper. Or the Kiss Kasket I thought was pretty ridiculous. No, I wouldn’t be buried in one!