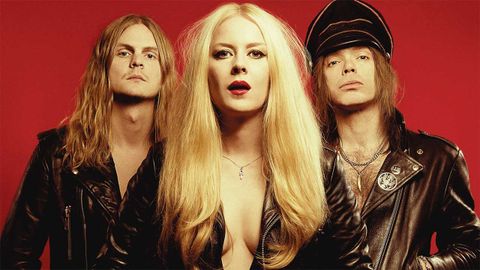 There was a satisfyingly loose, dark atmosphere to Lucifer’s debut, where Johanna Sadonis’s witchy ululations drifted smokily across the mammoth boneshaker riffs of ex-Cathedral stringmangler Gaz Jennings. It was a compelling brew; the trad metal pedigree was strong and the record was hung with the graveyard grooves of classic doom, while Johanna’s voice took it to a more theatrical, psychedelic plain.

Three years on, Lucifer II is not just a very different album, it’s a very different band; only Johanna remains of the line-up that recorded Lucifer I, and her new collaborator brings very different experiences and priorities – although like Gaz, he’s a seasoned pioneer from the early days of extreme metal with bucketloads of integrity and punter approval.

Nicke Andersson, long-time Entombed drummer and one-time Hellacopters frontman, has stepped in on drums and guitar, so accordingly this is a far more mischievous, glam-damaged, pop-savvy rock’n’roll sort of record, with a brighter, snappier sound than the debut’s cryptic low-end thunder.

Johanna’s more expressive voice is stripped bare and rammed upfront with attitude, the more sprightly and accessible tunes allowing the singer to explore her range and fully unleash her inner rock goddess. Nicke’s riffs, licks and solos have an infectious, celebratory joie de vivre, but the downcast profundity of doom remains in ghostly form on Eyes In The Sky, Faux Pharaoh and even Stones cover Dancing With Mr D, while the spooky folk-rock of Before The Sun makes for an unorthodox highlight.

The economical simplicity of Lucifer’s new approach doesn’t always result in tight, lean hard rock anthems – one or two so-so stoner plodders detract from the overall quality of material – but on the whole this is a mighty enjoyable platter from a line-up that seems to have bonded with indecent speed.