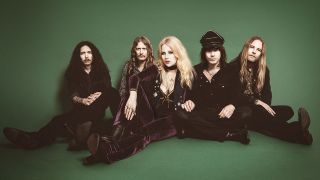 After one stellar album with the Oath, spirited songstress Johanna Sadonis quickly formed Lucifer upon the band came to a staggering halt before the debut record was even released.

Channeling the retro sounds of occult rock's heyday, Johanna found her feet (and her husband, Lucifer drummer Nicke Andersson) with Lucifer, and the band has gone from strength to strength in the six years since their formation.

Having already released two singles – Ghosts and Midnight Phantom – from their forthcoming third record Lucifer III (due for release on March 20), Hammer has teamed up with Century Media to exclusively premiere the occult rockers' video for latest single Leather Demon – and it's suitably macabre!

“We are excited to give you our third single, the third song on our third album. Please, welcome the Leather Demon into this dreary world," reveals Johanna Sadonis.

"We have summoned up this pale creature, a symbol of good old fun: hard rock, leather jackets, cigarettes and cemeteries.

"You may take the demon‘s hand for a full moon slow dance on the grave of modern civilization and take a step back in time when everyone at the rock show had long hair or at least a leather jacket and a record player at home. It’s never too late to let your freak flag fly! Long live the Leather Demon!”

Lucifer's new album Lucifer III is out March 20 via Century Media and available to pre-order now.

w/special guests: Year Of The Goat (all shows except those marked with *)