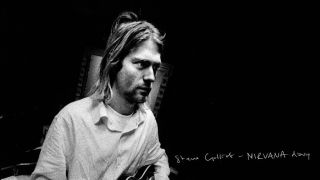 One of the world’s finest rock photographers, Steve Gullick has just released Nirvana Diary, a beautiful new art book documenting his time at the epicentre of the grunge revolution, principally his work with Kurt Cobain’s band. We selected six shots from the book and asked the London-based photographer to share the memories they hold for him.

SOUNDGARDEN_ _(Hyde Park, London, April 8, 1990) “This was actually my very first photo session for Sounds magazine. I think the only ‘rock star’ I’d shot before that was Wayne Hussey (The Mission) for a fanzine called Helter Skelter, so I didn’t have a huge amount of experience at that point. This shot was taken a day or two after I’d seen them play for the first time, at the Marquee, and they were so loud and powerful, so I was expecting them to turn up looking and behaving like rock gods, but they weren’t like that at all, they were just goofing around like kids and having a laugh, with no trace of moodiness. I was a bit taken aback to be honest. I’ve got photos of them rolling around in the grass, messing about, which totally wasn’t what I was expecting having seen them live. [Ex-Nirvana guitarist] Jason Everman was in the band then, but you could tell they really weren’t getting on with him, and this line-up wouldn’t last long.”

**DAVID YOW, THE JESUS LIZARD **(The Garage, London, September 11, 1993) “The first time I saw The Jesus Lizard was actually my last job for Sounds, but I didn’t meet them until I started working for Melody Maker, so it must have been the summer of 1991. David is such a genial bloke, and we used to hang out a lot, but when he was onstage he was a man transformed. The first time I saw them was at the Underworld in Camden, and he was rolling around the stage with his nuts hanging out and I was thinking ‘This is great…weird, but great’. Like Soundgarden, these people were different from the English bands at the time, they really knew how to enjoy themselves: the US bands really made the English bands look incredibly uptight. I guess for some of them, these shows would have been their first ever trip to Europe, so they were probably having the time of their lives. I remember that on the night this shot was taken The Jesus Lizard were at The Garage, and The Afghan Whigs were playing the [now closed] LA2 with the Jon Spencer Blues Explosion supporting them, so I shot the Blues Explosion first then went over to the Garage for the Jesus Lizard: that was a damn good night.”

**KURT COBAIN, NIRVANA **(Civic Centre, Springfield, MA, November 10, 1993) “I got on well with Nirvana, and I enjoyed being around them. I worked a lot with [Melody Maker journalist] Everett True at the time and he was really good friends with Kurt, so I was accepted pretty quickly. I shot Nirvana a lot, but I think these are the best shots I did with them. After the experience of that first Soundgarden shoot I never treated bands like rock stars, I treated them as people, and I think Nirvana responded well to that: if these pictures capture a certain intimacy it’s because Kurt was just a bloke to me and I was just a bloke to him, there was no pretence or posing. You build up a rapport with certain people, and I think I just got on with Kurt because we felt we had some things in common.”

MELVINS (Disneyland, LA, September 18, 1993) “Melvins were doing promotion for their Houdini record, half of which Kurt produced, and so we asked if we could take them to Disneyland and that was fine with the label. We just thought it’d be funny if they joined the Disney parade, and obviously no-one but us knew who the fuck they were, so that added to our amusement as they walked along waving to the crowds.”

COURTNEY LOVE, HOLE (Rough Trade shop, London, March 23, 1993) “I liked Courtney. The very first time I met her was at [Nirvana/Hole PR] Anton Brookes’ office: I was walking out and she was walking in and she said [drawls] ‘You look like my ex-boyfriend…but less handsome.’ I thought, ‘Oh, thanks very much, nice to meet you too!’ So that was an interesting first impression. I think she’s a great artist, and those first two Hole albums are incredible. Funnily enough, I don’t remember even being at this show. I mean, obviously I was there, but I’ve no memory of it at all! I remember they were also playing [West London club] the Subterranea on this trip and I was quite outraged that I couldn’t go because Courtney had made it a women only gig: I think she’d been sexually assaulted after stage diving into the crowd [in Glasgow] so you could understand her logic: fucking fair play to her. I think a couple of guys might have got into that show by wearing dresses, but er, I didn’t want to do that.”

**EDDIE VEDDER, PEARL JAM **(Paramount Theatre, New York, April 17, 1994) “This is one of the last pictures in the book, and it’s where I wanted it to end, because this is obviously right around the time where my relationship with Nirvana ended. Kurt objected so strongly to Pearl Jam, and I could understand why musically, but it seemed to go to a personal level which I always thought was out of order because Eddie Vedder is one of the most beautiful men on the planet, and he’s most certainly punk rock in spirit, even if that didn’t always come out in Pearl Jam’s music. This photo was taken about a week after Kurt’s suicide, and it was such a strange time, because obviously that massively affected everyone that knew Kurt, and everyone was mixed-up and sad and confused. Pearl Jam and Nirvana were seen as the two figureheads of grunge, and I think that Eddie now felt that all the pressure was now on him, and he thought he couldn’t handle it. I don’t know exactly what those photos are, but they captured something of the mood of the time, which was pretty fucking heavy.”

Steve Gullick’s Nirvana Diary is available exclusively via Rough Trade. You can see more of his work on his website here.