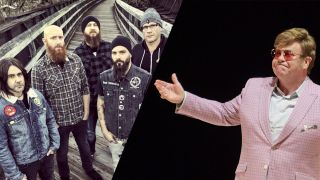 The Institute of Contemporary Music Performance (ICMP) has taken Billboard's top 100 artists from 2018-19 and performed a study to discover the hardest working popular musicians of the year.

The ICMP analysed factors such as the number of domestic (US) shows, the number of international shows and the total number of shows and number of countries played to come to their conclusion, and Killswitch Engage are the only metal band to appear in the resulting top 10 hardest working musicians list.

Elton John also scored highly – the oldest musician to feature in the list and the artist with the most international shows – but both Elton and Killswitch were beaten to the top spot by indie singer-songwriter Lewis Capaldi, who is, according to the study, the hardest working popular musician of the year with a whopping 195 live shows.

Ed Sheeran is the "most travelled musician" with 32 different countries in one year under his belt, Billie Eilish is the artist with the most US shows, and pop is the most travelled genre – figures, eh?

Who is working the hardest?

Pop might have taken the lead, but plenty of rock made it into the full list with pop-rock outfit Imagine Dragons making it to number 12 and psych-rockers King Gizzard And The Lizard Wizard hitting number 21.

Panic At The Disco! also feature in the top 30, as well as 5 Seconds of Summer and Lynyrd Skynyrd. Metallica are at number 36 while Foo Fighters clock in at number 39.

Other rock and metal acts in the top 100 include Eagles, Fleetwood Mac, Journey, Slipknot and The Rolling Stones; and despite being out of action for a decade until this summer, prog-metallers Tool even in made it in at 97.

We just wonder what the results would have been like if they'd included the illustrious world of extreme metal...