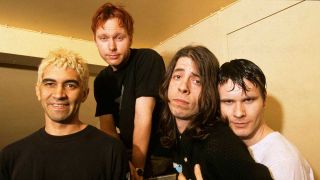 So, imagine how it must have felt to have found yourself at a cosily grubby kegger above the warehouse of a Seattle branch of West Marine Boating Supplies, just off Mercer Street, on February 19, 1995, to discover that the entertainment that night – setting up their gear on the floor, no fancy stage here – were none other than the Foo Fighters: the band the whole world is desperate to see.

The Foos had thrown the party themselves, inviting fifty or so close friends and family to witness the group’s first-ever live concert. Dave Grohl even provided the keg, telling Alternative Press’s David Daley, “We wanted everyone to get drunk and be like, ‘You guys are really good.’”

Cramped into one corner of the stark white space with all their gear, the Foos rocked hard, Dave sporting a sly Michael Jackson T-shirt which he’d also worn at Nirvana’s Pier 93 concert in Seattle, filmed for MTV’s Live & Loud, in December 1993. It depicted “The King Of Pop,” whose Dangerous album Nirvana’s Nevermind had deposed from the top of the charts in January 1992, with a caption beneath reading, “I (heart logo) kids.” (Perhaps it was his lucky shirt? Kurt had also been photographed wearing it.)

“Afterwards we thought, ‘We did it, we pulled it off’,” remembered Grohl. “Fifteen minutes after that show was over, Pat and I grabbed each other and said, ‘Let’s go play somewhere else now.’”

Four nights later, while overseeing final mixes of the album in Los Angeles, the group snuck out to Arcata, a sleepy college town in Northern California, population circa seventeen thousand, for what would be their second-ever gig.

While their first had been strictly invite-only, this second show was general admission, though the Foos were performing unannounced, and entirely unplanned. The group had called up Arcata’s local rock club Jambalaya the day before and asked if they could jump onto the following night’s bill, playing support to covers band The Unseen, whose set list would feature a clutch of Beatles and Elvis Costello favourites.

By showtime on the evening of the twenty-third, word of the Foos’ sneak attack on Arcata had slipped out to local rock fans, who descended upon Jambalaya in hordes, quickly overwhelming the venue’s strict 220-capacity limit.

By the time Foo Fighters hit the stage, nearby G Street had been closed off by the cops, while kids who’d been unable to get tickets pressed their faces against every spare inch of Jambalaya’s six-foot-tall windows, desperate to catch a glimpse of these future heroes. Whichever side of those windows they found themselves, the rock fans of Arcata would all agree it was a legendary night.

Afterwards, Grohl manned a makeshift merch-stand, selling T-shirts the band had stencilled in the van on the way over, at three dollars a pop. Nirvana’s success had caused a rupture in traditional concepts of punk rock ethics, as underground acts struggled to prosper in an overground world without “selling out.”

At Foo Fighters’ first public concert, Grohl signalled he was willing to join the melee again, to take his music to the people, but this time it would be on his terms, at a speed he could handle, and a scale he could be comfortable with. He would approach the group’s first national tour with a similar mindset.

Following those first two lightning-strike performances, Foo Fighters played a further handful of low-key shows through March, playing rooms like Spaceland in Silver Lake, California; Satyricon in Portland, Oregon (a benefit to help fund a private investigator to solve the murder of Mia Zapata); and the Dingo Bar in Albuquerque.

Their first “hometown” show was at the performance space Velvet Elvis on March 4, where Krist Novoselic watched on from the audience as Grohl sang himself hoarse, guided a feral, blitzing Wattershed towards oblivion (“I’ve got to get another guitar!” he yelled, at its destructive climax), and wrung every drop of catharsis out of Exhausted’s aching coda. These staccato baptisms of fire proved the fledgling Foos well up to the task of taking their music to people.

It was time to hit the road.

Foo Fighters: The Band That Dave Made by Stevie Chick is out now.