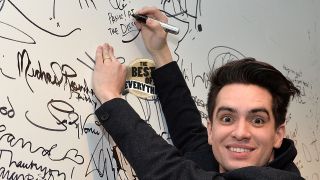 11 years since the release of their debut album, A Fever You Can’t Sweat Out, Las Vegas’ Panic! At The Disco have strived to push boundaries in the alt-rock genre.

The band’s most recent album, Death Of The Bachelor, continues that trend and mirrors frontman Brendon Urie’s myriad influences of swing, gospel, pop, rock and emo. If pushed, he can do a decent metalcore vocal too. His skills are sickening. As his band prepare for their tour later this month, we challenged him to pick a 10-song essential playlist from his band’s five studio albums.

“It’s so crazy talking about this,” laughs Brendon. “I’m not Kanye West. Talking about my own stuff is so weird!”

Still, we managed to prise a playlist from him. It wasn’t that hard. Here, in no particular order, are the 10 songs he selected…

“I remember writing this and watching Alice In Wonderland and ‘shrooming out of my mind, and being like, ‘Oh my God, I’m going to lose my mind’ and trying to put what I saw into words. That was an adventure for me, trying to be The Beatles.”

“This one started off as a really slow jam, we all got together to work on it and it grew into this. I jumped over to bass and we switched instruments between us which was really fun to do. How I write a bass part is like Paul McCartney writing a bass part, because he’s a frustrated guitarist and he writes guitar lines for bass. That was kind of what I was doing, and it was a a lot of fun.”

“I was trying to write a Peter Gabriel song like In Your Eyes. I really love Peter Gabriel. I hadn’t written a song like that before for a Panic album, and I thought it was really neat because I was doing something new and exciting.”

“This actually came from an idea right after A Fever You Can’t Sweat Out came out. I never stopped writing, and I had the pre-chorus and the chorus ready, so I jumped back through my files and was like, ‘Yeah, I’ve been sitting on it for about three years and I’ll use it!’.”

“I was having a lot of fun in the studio doing a lot of production; I was just creating tracks. [I wrote this] right after I’d watched Bronson, the Nicholas Winding Refn movie about Charlie Bronson – the soundtrack was all this amazing 80s pop. I was like, ‘Man, I really like that stuff!’. So this was my take on how I felt about that movie.”

“Not only was that the first single this album, it was one I felt so immediately proud of. I’d been sitting on the idea for a while and didn’t have all the words finished; I was so frustrated. The idea was to have this actress from the 40s or 50s and I was going to use her name – I had Marilyn Monroe [in mind] but it didn’t work out. I didn’t have the ‘Are you nasty?’ part. That came about because I saw a Janet Jackson music video [for the song Nasty] and she says,’Miss Jackson, if you’re nasty…’ and I thought, ‘Oh, there it is!’ Then it all clicked.”

“I’m such a huge fan of Sinatra, and I felt that really portrayed the idea of Sinatra in a more modern setting in terms of the sound of the song.”

“I’ve always wanted to write a party song. Not just a song that you can party to, but a song describing the things that you experience at a party, or hope to experience. So there’s a lot of jumping around and trying to figure out fun ways to describe a debauched night. I’m so glad I got to use the Rock Lobster sample, too.”

“That’s the song that got me to this point. It’s probably the reason I’m here talking about me and my music with you. I’ve got to give credit where it’s due. That was the one that took me around the world.”

Panic! At The Disco are on tour from September 10.