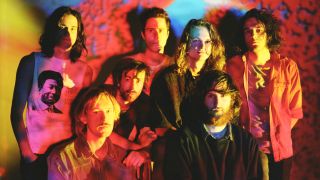 Sex Pistols at the Free Trade Hall. Ramones at the Roundhouse. Some gigs are so pivotal they inspire waves of people to start their own bands. In the case of Australian septet King Gizzard & The Lizard Wizard, their epiphany came in December 2009, when a bunch of US garage rockers breezed into town.

“We saw Thee Oh Sees at our local hangout, The Nash,” explains the band’s drummer/theremin player Eric Moore. “It was a weeknight and there were only about 20 people there. But everyone was in some way affected by the show.”

Moore and co haven’t hung about since forming in 2010. Their latest album, the spectacular I’m In Your Mind Fuzz, is their fifth in three years. It arrives at the end of a whirlwind 12 months in which they’ve toured the US and Europe, undergone three swings around Australia and released two LPs. The new one is an exhilarating burst of garagey riff-rock, strobing psychedelia and rumbling jams. From the title track (part of a continuous four-song blast) to the krautish thrum of songs like Hot Water, the band somehow manage to assimilate everything from 13th Floor Elevators to Neu! to Tame Impala. And, of course, Thee Oh Sees. In fact, the latter’s John Dwyer is such a fan that he issued it on his own Castle Face label in the US.

It’s a natural extension of their days at The Nash (The National Hotel), where the various band members immersed themselves in “really cool music – 60s psych and Nuggets comps. All that early, primitive garage-punk. But, for us, it’s also The Stones, The Beatles, Dylan, Neil Young.”

Recipients of 2013’s inaugural Global Music Grant at Australia’s Carlton Dry Independent Music Awards, King Gizzard used the $50,000 prize to fund a tour of the States, play the Austin Psych Fest and finish the album in Brooklyn and upstate New York. “That was the fulfilment of another dream,” says Moore. “We wanted to record where Dylan and The Band had once hung out. We basically built a studio from whatever we could find on the road.”

Moore insists the fact that King Gizzard are still living hand to mouth is all worth it. “Touring really wears you down, but our goal is to put out two albums a year. The follow-up to I’m In Your Mind Fuzz will probably come out in early 2015. It’s very psychedelic and jammy. We’re still keen to explore this. Though the next one might be riffy, one-chord rock songs and two-minute bangers. That’s what’s exciting. Who knows what’s going to happen?”

FOR FANS OF: Neil Young

“I remember us all discovering On The Beach by Neil Young at around the same time,” says Eric Moore. “We all took our own thing from it. Neil’s been such an incredible artist. Every period he’s gone through has brought up something special. We take a lot from his recording technique and experimental production, too.”

I’m In Your Mind Fuzz is out now via Heavenly.