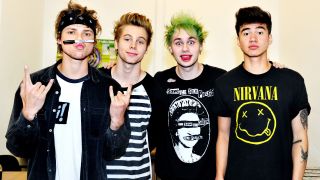 Up until now, unless you've previously attended a date on One Direction's world tour on which the Australian pop-punk band served as main support, you might be utterly unaware of the existence of 5 Seconds of Summer. This will soon change, whether you like it or not.

A brief recap then: Formed in Sydney in 2011, the quartet began to get international attention when their covers of pop, R&B and pop-punk hits went viral online following retweets by One Direction members Louis Tomlinson and Niall Horan. In February 2013, the quartet were picked to support the British boy band on their world: one year later, their debut single She Looks So Perfect hit number 1 in 39 countries, including the UK. This week, their self-titled debut album entered the UK charts at number 2…and the national charts of 70 other nations at number 1. The band’s first ever European headline tour – which includes no fewer than 10 arena shows in the UK and Ireland – goes on sale on Friday and will sell out in seconds.

And at this point you’re almost certainly asking: So. Fucking. What?

The thing is, 5 Seconds Of Summer don’t just want to be a token rock band for 1D fans. They want to be a proper part of the rock world too. And in this pursuit, they’re being assisted by some well-established names. Check the songwriting credits on the 5 Seconds of Summer album and you’ll see Good Charlotte men Benji and Joel Madden, All Time Low frontman Alex Gaskarth and producer John Feldmann (Goldfinger/The Used/Black Veil Brides/Panic! At The Disco) listed as contributors: Lower Than Atlantic frontman Mike Duce has also penned songs for the band.

The music industry at large has responded favourably to the band. Last month, Kerrang! magazine included the band alongside the likes of Rise To Remain, The Defiled, Falling In Reverse, MCR guitarist Frank Iero and Neck Deep on a specially-commissioned tribute album to mark the tenth anniversary of the release of Green Day’s American Idiot. Readers of the magazine subsequently voted the quartet as the rock scene’s Best International Newcomer, affording the group a degree of legitimacy they’d doubtless happily have traded for ten of those chart-topping statistics. Like it or not, 5 Seconds of Summer have opened a window into our world.

So what happens next?

Well, in a sense, we’ve been here before. A decade ago, Essex pop-punk Busted were one of the biggest guitar bands in the UK, capable of playing eleven night at London’s Wembley Arena, and selling over two million albums. Rock magazines, however, wouldn’t touch the band, much to the irritation of their ‘handlers’, and Charlie Simpson’s decision to jump ship to focus upon his post-hardcore band Fightstar led to the band’s demise.

The most interesting aspect of Busted’s career, however, was where their fans migrated to once they grew out of the group’s squeaky-clean pop-punk. Many latched on to the like-minded McFly, but tens of thousands more looked beyond the pop world to the pop-punk and emo bands who the members of Busted had cited as heroes – Blink 182, Green Day, Taking Back Sunday, My Chemical Romance, etc,. It was no coincidence at all that when Green Day released American Idiot and MCR released Three Cheers For Sweet Revenge in 2004 they found a readymade audience of passionate teen music fans who simply weren’t around a few years earlier when Warning and I Brought You My Bullets, You Brought Me Your Love emerged.

The phenomenal success of pop-punk and emo in these years may have been derided by many rock fans who considered it their duty to guard the citadels of Metal against poseurs and uncommitted ‘tourists’, but its undeniable that the likes of Green Day and MCR served as ‘gateway’ bands for the rock and metal scenes. Ultimately, a number of those newly engaged rock fans would move on to harder, heavier acts: look at a Korn, Slayer or Slipknot fan under 25 and chances are you’re looking at someone whose entry points into our world was Bowling For Soup or Good Charlotte or The Used or Blink 182.

Which brings us back to 5 Seconds of Summer. In the time it takes you to read this blog, a few thousand more One Direction fans will have discovered the fresh-faced Australians. And in doing so, they’ll be trawling YouTube and finding the band’s covers of songs by A Day To Remember and Blink 182 and All Time Low. And from there, they might be curious enough to look deeper and longer into this new world at their fingertips…and who knows what they might find?

Right now, there might be a gulf separating One Direction fans from fans of Bring Me The Horizon or You Me At Six or Issues any of the other perfectly styled rock bands you’ll see gracing the covers of rock magazines in the next six months. But with 5 Seconds Of Summer acting as a bridge between the two camps, don’t bet on that gap getting a whole lot narrower very soon…