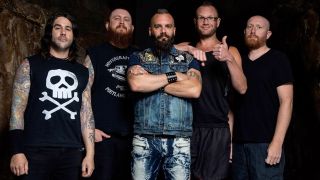 The upcoming eighth album from Killswitch Engage is one of the most anticipated releases of the next 12 months. The band began working on the follow-up to 2016’s Incarnate last year, with frontman Jesse Leach posting regular updates from the studio – including an unexpected collaboration with former Killswitch singer Howard Jones, and dropping fake reggae songs. We recently collared Jesse for an update on the state of things…

Hey Jesse, how are things in the KSE camp right now?

“Good – we’re pretty much wrapped up with the record, just got some fixes to do. We’re making up for the tour we cancelled [in the States last April/May] from when I had my vocal surgery [to remove polyps on the vocal cords], and then the album is the big thing.”

Where have you been recording, and who with?

“Between Zing Studios in Massachusetts, where we’ve recorded almost all our albums, but also going to Adam’s [Dutkiewicz, guitar] home studio in San Diego, California to do vocals. Adam’s our guy, the guy.

Of course, there’s one person you’ve workeon this album that everybody is excited about…

“Working with Howard [Jones, KSE vocalist from 2002 – 2012, currently of Light The Torch] was great – perfect timing, too, as it was just about when I’d damaged my vocals and needed the surgery. I jumped on the phone and he was on a plane the next day. I showed him the lyrics, he heard the song, and within an hour-and-a-half he’d nailed it, because that dude’s voice is incredible.”

Howard also guested with you onstage a couple of times in 2018 – is that something you could see yourself doing moving forwards?

“Not really; I’m not saying if he’s around and able to play we wouldn’t, but we’re not planning to do a Van Halen thing where we’ll have two singers. We just want the fans to know that we’re all family – it’s all love.”

Reports suggest the songs will cover issues of metal health – is that true?

“Going forward, I’m going to be doing a lot of promotion to raise mental health awareness. It’s something that’s very near and dear to my heart, so I’ll be doing as much as I can to advocate for that and use my soapbox to speak out and keep that conversation in the forefront.”

What other subjects are you tackling with this new record?

“It’s definitely some reaction to the state of the world, to the state of our country and what’s being going on here. There’s some angry, political stuff, but written in such a way that it’s not going to overwhelm the listener. It’s written poetically; I’m being ambiguous with it, because I’d rather it read like a story than a direct statement. There’s a lot of heavy themes lyrically – I’d even go so far as to say it’s probably the most difficult record I’ve had to write, because it comes from such a dark, angry place.

Did having to undergo surgery on your vocal cords partway through the year feed into that at all?

“I actually think the surgery was a total blessing in disguise. I’m singing better – getting more range in my vocals than I ever have. But, the real crazy shit is, I had to give up gluten because it turned out I had an intolerance that was affecting my voice. I was getting acid influx and having to fight all the mucus back all the time.”

You’ve toured a lot as a support band on the Incarnate run. Will the next record see you coming back as a headliner in your own right?

“Yeah, we’ve had a lot of good offers lately! Some of these tour spots were impossible to turn down, but I can’t wait to come back over and do our own shows. I think we’re making the right choice – it gets us out to different crowds who might not even be fully aware of us. It’s important – we’re trying to expand our fanbase, so that when we do come back we can grab it by the throat on a headline tour.”