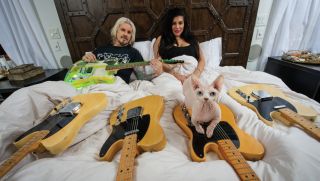 John 5 moved to LA at the tender age of 17, after a meeting with Whitesnake's Rudy Sarzo, the young virtuoso wound up playing with Lita Ford and opening for one of his biggest inspirations: Kiss (who wound up being some of his closest pals).

From there the colourful shredder's career would only get brighter – he worked with Rob Halford and Trent Reznor and later, David Lee Roth. Then, after Zim Zum left Marilyn Manson, John 5 took his place.

Now, the guitar maestro plays for non other than horror rocker Rob Zombie, while simultaneously working on his own solo project (where he often collaborates with other incredible shredders, such as Steve Vai, Joe Satriani, and Jim Root).

In his spare time (and there must not be much of it!) the guitarist is an avid Kiss collector (all showcased on his instagram) and of course, boasts a pretty incredible hoard of guitars. We caught up with him to find out all about his collection and discover his favourite and most unique guitars...

When did your obsession with guitars start?

“I got my first guitar for Christmas in 1977 and I started taking lessons right away because that was part of the deal with my family. I had a really good teacher and he taught me some of my favourite songs at the time. It was the greatest thing that’s ever happened to me, that’s what made me never want to put it down.

"I got into Kiss at the same time, when Love Gun came out, and I have a Kiss collection as well as my guitars – my collection is the rarest of the rare, I probably have a lot of stuff Gene Simmons doesn’t have!”

So how many guitars do you currently have?

“I love Fender Telecasters and I have such a collective soul that I have one from every
year starting in 1950. Then I started on Stratocasters, Les Pauls, hollow bodies, acoustics, double necks, Flying Vs and then I have all my crazy customs. I don’t still have my first guitar, but I do still have my first ever amp.

"I have too many guitars now I think about it, but it’s a lot of fun and it’s how I make my living so it’s a good habit to have. I’ve had them on display in the house before but because the collection is so massive, most of them are now in storage that’s temperature-controlled and off the floor to protect them.”

Do they all get to see action?

“I use almost all of my guitars, but some I don’t play simply because they’re such historic pieces. I have one of the very first solid body electric guitars ever built in 1950 and it’s a very big part of history – that one’s in a safe because it’s one of my most expensive.”

Which guitar has the most sentimental value for you?

“My gold Fender Telecaster. I play it every single minute of every day and I’ve used it
on every record I’ve played on in a long time. It’s one of a kind and somebody might not want it because it’s not that vintage but there’s so much history behind it and it’s been played hundreds of thousands of times. If it could speak, it would probably say,
‘I’m exhausted, leave me alone!’”

How does your collection make you feel?

“It’s a very expensive habit but it’s a nice hobby and it’s not harmful to my health. People with collective souls collect things that made them happy as a child and it’s very therapeutic in stressful lives, but people who don’t have that mindset look at you like you’re crazy. When I was a kid, I got into guitars and Kiss and I still do those two things today because they make me feel great.”

Where did that iconic lava lamp Telecaster come from?

“When I was doing an autograph session at a NAMM show, this guy, Ken Meyer,
told me he made guitars and that he would love to make me one. I always listen to people and give them opportunities and I’ve started a lot of careers that way, so I told him I always wanted a lava lamp guitar and an LED guitar, too, so he went away and made them. He doesn’t know how talented he is!”

On a scale of 1-10, how metal is your badass guitar collection?

John 5 And The Creatures' latest album Invasion is available to order now on various physical and digital formats.