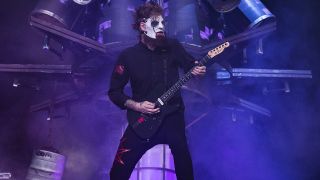 Jim Root has explained why he turned down the opportunity to play in Slipknot twice before eventual joining the Iowa heroes in 1999.

The guitarist was speaking with WMMR when he was asked if it was true that he said no to the band back in the early days.

Root replies: “Yeah, it was weird because I had given up playing guitar when I was 24. I was like, ‘I haven't made it yet, I don’t even have a band’ – I just was down on myself about it.

“I didn't even own a guitar – I had to borrow a guitar from one of my buddies. A couple of friends of mine asked me to join a funk rock band called the Beat Truck Fatals – and that got me back into playing guitar and the music scene.”

Root continues: “At that time, original Slipknot vocalist Anders Colsefni called me about replacing Donnie Steele in the band, and I said no at that time because I hadn’t been playing guitar and I knew that those guys were players.

“Then, after Corey Taylor joined Stone Sour, Slipknot had a record deal and I told my band Dead Front, 'If Slipknot ever call me, I won't join, I don't want to feel like it's handed to me, I've got to feel like I worked for it, like I did something.’

"And sure enough, they did. I never thought they would, so I said no again. Finally, I got to the point where my buddy Zack said, 'What, are you stupid? Very few times in life do you get a chance to take a great step forward. Even if it fails and you fall flat on your face, you can always come back.'

“So I called Clown, and ended up being where I am now.”

Slipknot released their new studio album We Are Not Your Kind last month and recently wrapped up their North American Knotfest Roadshow, with their next appearance set to take place at Louisville’s Louder Than Life festival on September 27.

They’ll follow that with a set at Sacramento’s Aftershock Festival on October 11 before heading to Australia.

The band will then play Knotfest Mexico on November 30 and Knotfest Colombia on December 6 before returning to the UK and Europe in early 2020.