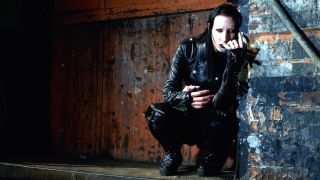 Welcome to the Church Of The Nu-Apocalypse. It’s late 1996 and the world is in Hell.

At least, it is if you’re in America, watching the hottest metal band of the year tearing the shit out of Detroit. But all is not well in the House Of Manson tonight. The Marilyn Manson band may have come to deliver us from an eternal wave of lame Nirvana wannabes, but even disciples of chaos can fall victim to the dreaded flu.

Thirty seconds into the furious Irresponsible Hate Anthem, a fevered-looking Marilyn Manson lurches forward unhealthily, grasping for the microphone stand. Ever wary of sharing the same stage as Manson, guitarist Zim Zum’s face turns from a look of nervous apprehension to a mask of incredulity and terror as he watches the singer gnash his teeth and pull himself from the floor, like a rancid angel heralding the end of the world. Scary.

Midway through this frenzied display of gothic theatrics, the lights go down and roadies hastily assemble a mock pulpit. The lights go up again and the band are wearing steel helmets, while the stage is now decorated with powerful-looking black, white and red flags bearing the international symbol for shock hazard. Manson goes ape-shit as the Generalissimo in charge: “See us! Be us! Worship us! Fuck!” Even scarier.

“The concept behind the live show is really quite simple,” says a decidedly unwell Marilyn Manson, as he lies sprawled across the bed in his hotel room later that night. “When I speak, people listen. That gives me a power over them. I quickly came to realise that being a rock star grants me the same power over people as it would if I were the President. You’re empowered by attention. It goes all the way back to Roman times and Caesar. People give you power, but it’s what you do with it that counts.”

The second Marilyn Manson album, Antichrist Superstar is a concept album, and it comes hot on the heels of their unexpected MTV hit Sweet Dreams (from the band’s stopgap Smells Like Children EP). It tells the story of the nobody Wormboy who exorcises personal demons to become the new Antichrist Superstar.

“The story is not about growing up, it’s about ‘becoming’, and it’s about not being able to deal with any of that,” explains Manson. “Above all, it’s about the balance between personal strength and self-control.

“It’s autobiographical, but it’s also a work in progress. I don’t know how this story is going to end yet.”

The end may as yet be unwritten, but the birth of the Antichrist Superstar took place a long time ago in the disaffected and angry young man mind of one Brian Warner. From the moment he stepped on stage into the hotbed of Florida’s S&M underground, Warner disappeared forever and left the ascending star of Marilyn Manson in full control of his destiny. Hooking up with Nine Inch Nails head honcho Trent Reznor proved to be the final ingredient in the explosive tale.

“I first met Trent in 1990, just after we formed the band. It was before NIN’s Broken came out, so he wasn’t a huge start then. After he had his success and decided to start Nothing Records, he approached us to be his first band.

“We’re not a progeny of Nine Inch Nails. I’ve always had a vision of where to take this band, and Trent just made it happen more quickly. Trent is also a great producer and he was already exposed to the attentions of the media, which is exactly where I wanted us to be.

Following the critical acclaim of Manson’s 1994 Reznor-produced Portrait Of An American Family debut, serious touring led to much internal friction within the band, and by the time the Antichrist Superstar album had been finished at Trent’s home in New Orleans, drummer Sara Lee Lucas and long-time guitarist Daisy Berkowitz had been replaced by Ginger Fish and Winona Ryder lookalike Zim Zum (the line-up is completed by Madonna Wayne Gacy and bassist Twiggy Ramirez). A difficult album to make, then?

“Actually, the album became very easy for me to write,” the reptilian frontman hisses. “The lyrics came from dreams I’d been having. Twiggy and I would be sharing the same frequencies, and he would match my lyrics musically.”

On the road, Manson is renowned for attacking members of his band. In recent months, both drummer Ginger Fish and keyboardist Madonna Wayne Gacy have been admitted to local casualty wards.

“I work so hard that I expect things to be perfect,” the vocalist sniffs. “When things go wrong I get mad and take out my frustrations upon those whose fault it is. If you fuck up on my stage, you get punished; it’s the only way people will learn. My band and road crew live in fear of my wrath,” he smiles. “No one likes to piss me off. I make examples of people who annoy me.”

For all his on-stage bombast, it would be a mistake to believe that this college drop-out and former pizza delivery boy is only capable of spouting mindless rhetoric. Despite his obvious outward displays of chaos, each probing question is checked by a carefully considered reply and is the product of a well-ordered mind. There is a definite method to this man’s madness that makes him all the more dangerous to everyone he hates. And, as a recipient of strict episcopal schooling, Manson hates organised religion quite a lot.

“There’s a false sense of hope in America that everything will be okay. But the world has to end and we have to have a rebirth. I’m not talking about a physical destruction of life or property, but a mental and spiritual rebirth. Everything is so common now that I’m surprised people are even capable of being entertained any more,” he says dismissively.

“Christianity is the root of all America’s weakness. You grow up feeling guilty for being a person, because everything that’s natural for a human being to be like, such as lustful, greedy or sexual, is considered a sin. You’re always controlled. I’ve learned to thrive on those things; I’ve learned to live and it makes me happier.”

For someone who’s “happy”, he doesn’t sound too cheerful at the end of his ‘autobiographical’ album. The penultimate track, The Reflecting God, is about suicide and is a chilling precursor to Man That You Fear, an empty and morose tale devoid of even the merest glimmer of hope.

“The Reflecting God is about coming to terms with your role in the world,” he counters, without missing a single beat. “Destroying the world is as easy as killing yourself. If you’re dead, then the world doesn’t exist any more. I was exploring a particular avenue of thought.

“Antichrist Superstar as an entity is very nihilistic, but I believe it represents an element of misanthropy that’s within everyone – the disgust for mankind. But, as a record, nihilism and destruction in Antichrist Superstar are only factors in a more complicated world.”

Without even a hint of an ironic smile, Manson takes his gaze from the mind-numbing pap that is American MTV and cocks his head to one side. “Do you want to know why they hate me so much?” he asks. “They call me a junkie and a Satanist, they’ve even accused me of being a paedophile. But really I’m much, much worse than any of that. I’m everything they’re afraid of. Everything they hate, everything they try to hide, and a lot more besides. I speak my mind and I show people what’s out there in reality. They’re using me as the bogeyman, but I’m reflecting it all back like a mirror.”