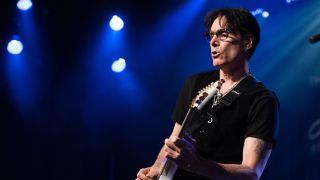 Assessing his list of “the 10 records that changed his life,” Vai notes that his choices could vary week to week. “There are so many records that had an impact on me for so many different reasons. I mean, think about the power music has: It can answer questions that you’re asking yourself; it can be a source of support for a particular situation you’re in; you can find solace in the sound, the lyrics. It can get you through a trying time or a depression – it can work wonders.”

“This is the record that set me off. It completely captivated me and engulfed me. Everything that I love about music is captured here: Historical melody and songs, great lyrics, and energy that never stops. The story is beautiful – you’ve got drama, comedy and dancing. What else do you need? It just seemed so perfect to me.

“I think that I always felt like a composer, but when I heard West Side Story, I said, ‘That’s it. I want to be a composer.’ And I was six years old or something. It’s pretty remarkable when a piece of art does that to you. You have this awakening, this realisation of where you’re headed in life.”

“I was maybe 10 or 11 years old, and at that time there were no videos or anything. If you liked rock music, there weren’t that many chances of seeing bands on TV. But suddenly, there was The Partridge Family show, and here was this sort-of rock band on TV each week. I was enamoured.

“Danny Bonaduce was the one I resonated with. He was about my age. He played an instrument with strings on it, and there was a curly white cord that went into his amp. It was all so incredible to me. I thought, ‘If this kid could do it, why can’t I? Why can’t I play the guitar?’ I got that record and I loved it. It’s really catchy music, especially if you’re a young kid.”

“My older sister, Pam, had this great taste in rock music. She was always listening to really cool stuff, and through her I first heard Led Zeppelin II. From the moment Jimmy Page’s solo on Heartbreaker came on, that was it for me. Page’s guitar playing and Robert Plant’s singing totally floored me.

“The truth is, I could easily put the next six Zeppelin records on this list and not be too far off. But we’ll just say Led Zeppelin II here as the anchor for a huge awakening into my deep association with the energy that comes from rock music.

“My younger sister, Lillian, had a guitar. I loved the guitar, but I just thought there was no way I could ever play it – it’s too cool. But hearing Led Zeppelin made me say, ‘I’m going to play the guitar, and that’s it.’ I bought a five-dollar Teisco Del Rey guitar from a friend, and I started taking lessons from Joe [Satriani]. I was about 12 or 13 at the time.”

“There was a department store called Korvettes that was literally a five-minute walk from my house. When I was old enough to cross Westbury Avenue by myself, I used to go to Korvettes and pretty much live in their record department. I didn’t know who Frank Zappa was at the time, although I’d heard funny stories about him. I saw Freak Out! one day and bought it – I also bought Deep Purple’s Machine Head, too, which on any other day could also be on this list.

“I put Freak Out! on, and it was like, ‘Whoa…’ It was really different from Led Zeppelin or anything else I was listening to. It’s not even my favourite Frank Zappa record, but it’s the first one I heard – it introduced me to his music. And he was doing all those things that West Side Story did, so that was very attractive to me.

“That moment of discovery is so special – the floodgates just open up – and the great thing is, it can continue to happen your whole life. I never really listened to Bob Dylan until fairly recently, and now I have every one of his records. It’s like a new life treasure when you find an artist who you resonate with. I love that feeling.”

“When I heard that record, it was like, ‘Uh-oh…’ It was that beautiful guitar, right there on a silver platter. Jeff Beck was a master craftsman on the instrument and still is. He continues to evolve, which is the stunning thing about him.

“Listening to Blow by Blow, I was struck by the depth of his phrasing and his control of tone, and there was his incredible use of dynamics and articulations to create a musical sentence with the guitar. It was like looking through a window and then suddenly being able to step out to the other side of it. Or having a light on in a room, and then you walk outside and there’s the sun. It was just like that.”

“This is another one where it’s about historical melodies. One of the great things about the old Alice Cooper band is that the songs are just incredibly powerful, cool and melodic, and the guitar playing and arrangements are very inspired.

“And it was theatre. I love that – you know, the ham’s cookin’, man. Cooper brought it home so hard. I was already an Alice fan, but Billion Dollar Babies sent me right over the edge. I became completely mesmerised.

“Some years later, my brother Michael ended up playing golf with Alice at a function, and my father wrote Alice a letter. My father was just the coolest guy; he was so proud of his kids. So he wrote Alice the most beautiful letter about playing golf with my brother and me being such a fan. My parents were really supportive. I think that they just thought, ‘Steve’s a good egg. He found a passion. The music is kind of crazy, but that’s OK. We don’t have to understand it as long as he’s happy.’ It’s kind of the way I feel about some of the stuff my kids listen to nowadays.”

“You might even say all of Stravinsky’s Ballets – Petrushka, the Firebird Suite and the Rite of Spring. When I heard this piece of music, my mind was thoroughly blown. I’ve listened to it perhaps thousands of times – all of the ballets. They represented a form of creative freedom that completely obliterated any rigid confines that you find in stereotypical, genre-specific music.

“Probably a month doesn’t go by when I don’t listen to Stravinsky – maybe less these days. I’m not as much into conventional classical music. I like Mozart, Beethoven, Bach and all that. I like stuff that’s unpredictable and wild, as long as it’s melodically, incredibly beautiful. The melodies in Stravinsky’s ballets are just to die for.”

“There are other Tom Waits records that I like more, but this is the first one that I heard. Here’s a funny story: When I was with Dave Roth, he talked a lot about Tom Waits. He thought he was great. I agreed that I knew who Tom Waits was, but I really didn’t. Around this time, there was a band opening for us called Bad English, and their singer was John Waite.

“I thought he was a good singer, but for some reason I got the names mixed up. When people would say Tom Waits, I thought of John Waite. Finally, I was at the Grammys talking to one of my friends who was a real music snob, and he said to me, ‘Did you hear the new Tom Waits record?’ I said, ‘No, I haven’t.’ He goes, ‘You’ve got to pick it up – Mule Variations.’ That’s when I said to myself, ‘I’ve got something wrong here.’ This guy would never mention the singer that was on tour with me, you know?

“I went to a record store and saw this Tom Waits CD. I said, ‘OK, that’s not the guy I was on tour with.’ I would buy 20 CDs at a time – I’d go home, put one in, listen, throw it out; then I’d put in another and go, ‘Maybe I’ll keep this one…’ Some of them just don’t do it for me. But when I put that Tom Waits CD in, it stopped me dead in my tracks. I was stunned. It was another one of those incredible, grateful moments where you feel like you’ve found a real treasure. It’s yours and it’s in your life. From that moment, I loved Tom Waits. I own his whole catalog.”

“Devin Townsend is just genius. He’s an intense man, and it all flows into his music, especially the Strapping Young Lad stuff. It’s as heavy as anything I’ve ever heard. There’s an energy and an intensity in it that can only come from an inspired person, but there’s also a melodic sensibility within the heaviness that creates this otherworldly kind of metal.

“It’s hard to listen to the whole record in one sitting – it doesn’t let up at all. For me, it was the first time I really heard truly deep metal artistry. Devin and I worked together when he was quite young. He hadn’t really discovered himself yet; he was in the process of it. I think working with me was maybe a starter for him, in a sense. It led him to know what he didn’t want and what he did want. I think he also picked up some production tools that he went on to use. He’s just an inspired, amazing artist.”

“This was an hugely important album for me. I was experiencing this incredible state of creative freedom, but I also knew that there was an audience for it, and that was like a release. It let me know that I can make the music that I want to make. And I’m never going to finish. It’s going to be a glorious ride.

“I think you make your best stuff when you get out of the way and the universe is expanding through you. You can only do that by being present in the moment. A lot of times when we’re being creative, in that elusive moment of looking for the right idea, there’s a stillness, almost like a non-thinking anticipation for the arising of the inspired idea. It just comes. You don’t even know how it comes, but it enters your mind. It’s an inspired thought, as opposed to a polluted thought. And when that happens, you just do. You create.

“Now, it sometimes takes a lot of courage to enter that zone. The mind is always saying things that can be contrary. You’re judging yourself and being critical. You’re filling your head with expectations of greatness and all that stuff. That’s what you’ve got to get away from, because the true, unique creativity that every one of us is capable of having access to is there in the stillness.”