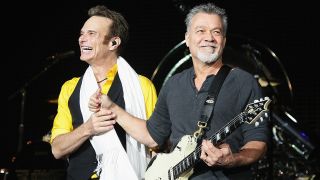 Former bassist Michael Anthony revealed in the summer that there was talk of a Van Halen reunion tour taking place, only for those plans to be scrapped.

And in a new interview with the Van Halen News Desk about his upcoming Las Vegas residency, vocalist David Lee Roth says he unsure about what's next for the band.

He says: “Four summers have gone by – and for a singer, that’s paralysing. Like a boxer or a tap dancer, I am dependent upon my whole rig. My whole body.

“I’ve paid a price for the time off, frankly. Enough said there. I hope the best for the fellas, but I don’t know what’s coming up with Van Halen.

“It’s time for me to use whatever talents and skills I have. I’m betting the rent on it.”

Earlier this week, it was revealed that Rhino Records would release a Van Halen vinyl box set feature 13, 7-inch singles that were originally released for the Japanese market between 1978 and 1984.