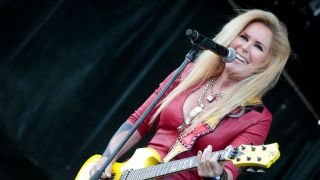 When Lita Ford called her latest album Time Capsule a “throwback,” she wasn’t simply playing fast and loose with terminology. The 10 tracks for the album were recorded during three different periods during the ‘80s but were never released. “I had these analog tapes sitting on my shelf for years – decades,” she explains. “In fact, we had to bake the masters in order to transfer them to digital and remix them; otherwise, they’d flake apart and disintegrate.” Thankfully, the guitar albums that influenced her aren’t quite so in danger of extinction.

“I’m a huge Deep Purple fan, but I’m really a Ritchie Blackmore fan. He’s simply a rock god. Picking out a favourite Purple album that features Ritchie is difficult – In Rock, Machine Head, Made in Japan; they’re all great – but I’m gonna go with Burn. I remember playing that record over and over.

“Ritchie’s double-picking technique made him stand apart from everybody else. I loved the liquid-like feel that he gave to some of his phrases. He also does these slinky runs in a minor key that he calls the ‘snake charmer.’ I met him when I was a kid – we did a tour together – and he taught me how to do it, the snake charmer run. It’s absolutely wicked. I use it every time I can.”

“What a guitar sound! Tony Iommi is the riff master. He wrote these parts that were so deep and dark – they were truly the heaviest things that anybody had come up with to this point. When you put the needle on the album, you literally stood back and went, ‘Whoa…’ It was an evil sound, and it perfectly matched the name of the band, their lyrics, just their whole aura.

“And what an inspiration Tony is to so many guitarists. Because of his accident years ago, he has these leather-like tips that fit over his own fingers, but he plays with them beautifully. And he’s left-handed, too. He’s definitely got a gift from God.”

“Talk about the man who changed everything. It’s hard to pick just one Hendrix album, but Are You Experienced is probably my favourite. I heard it when I was maybe 12 or 13, and I was completely blow away. Obviously, I was struck by the guitar playing, but I was also dazzled by Jimi’s songwriting. His lyrics and arrangements are so unique.

“He had a way of channeling feedback and noise in a very musical way. A lot of guitarists before him fought noise. They wanted ‘clean’ recordings, without any kind of extraneous noise. But Jimi made noise his friend – it became part of his music. He was a great rhythm player, too. He had this great technique of muting strings when he played chords. It really drove the music. And hey, he could sing at the same time. I’m still blown away by his talent. He could do everything.”

“Again, how can you pick just one Led Zeppelin album? Jimmy Page – what a complete guitar master. The opening riff alone on Whole Lotta Love changed my life. And the guitar solo, my God, it practically leaped off the record.

“It’s kind of funny: Black Sabbath didn’t really get on the radio in a major way, but Zeppelin, who could be just as heavy and dark, were all over the radio. I first heard Whole Lotta Love on the radio, and then I got the record and played it over and over and over. There was a little bit of sloppiness in Jimmy’s playing, but it didn’t matter. He had feel and groove. Sometimes precision isn’t the answer – passion is.”

“This album is phenomenal, and David Gilmour’s guitar playing just kills me. So much feel and emotion. To me, he’s somewhat similar to Jeff Beck – they both make their guitars cry and scream.

“Everything Gilmour does is from the heart. He’s a virtuoso guitarist, but he doesn’t think about how many notes he can cram into a phrase. It’s all about melody, tone, thought and feeling. He perfectly suited Pink Floyd – their music took its time and sucked you in.

“I jammed to this album quite a bit as a kid. In fact, I keep Gilmour in mind when I play live. All eyes are on you, and you have to remember to settle back and make every moment count. You don’t have to just rattle off a bunch of licks. Make your guitar playing say something.”